In a time when the objectification and exploitation of women has increasingly become a popular debate in regards to, well, prominent people in our society, Sarah Jones’s performance felt highly fitting on Tuesday night. The Tony and Obie award winning performer graced Campbell Hall with an excerpt from her one-woman show Sell/Buy/Date and kept the audience engaged and roaring with laughter all night.

Jones, also known as the “master of genre” by The New York Times, is well known as a stage performer, playwright and activist. Her first solo show, Surface Transit, garnered the attention of Gloria Steinem, a prominent feminist figure, as well as Equality Now, a human rights organization. This lead to her second project concerning issues of gender inequality in politics, known as Women Can’t Wait! These works paved the way for her Tony-winning show, Bridge & Tunnel, a successful hit that earned her an off Broadway box office record.

Sell/Buy/Date is set in the future, where we begin in the middle of a lecture given by a satirical British professor (who could easily be mistaken to be in her 30s, but is actually in her 80s because processed food is no longer a thing, thus increasing lifespans). In this future, a new invention known as “bio-empathetic resonant technology,” BERT for short, sits right inside an individual’s ear and allows them to experience the memories, thoughts and emotions of interviewed people from the past.

We learn the topic of the lecture is sex work, a controversial issue in today’s time, but a universally approved and understood topic amongst the lecture hall. Students tune into their BERT device and watch what people years ago had to say about this matter.

We hear from various other people, from a Bay Area feminist college student who majors in “sex work” to a very frat-like man during his bachelor party aka the strip club. I found this scene particularly funny; the man claims to respect women, his justification being “I’m marrying a woman!” Somehow this seems to resemble a good chunk of the male population these days.

An impactful moment of the play is when we hear from a Jamaican sex worker on the matter. This woman unashamedly explains she needs the money to support her family back home and this job provided her with more money than any other job has. She defends herself for keeping the job, stating everyone hates at least something about their work. By the end of her spiel (which Jones absolutely aces in accent, posture, dialect, etc.) we learn she was trafficked for sex into the U.S. While I could write nearly a whole essay on how important it is that we understand this, that would be straying a bit too off topic. However, I immensely applaud Jones for bringing light to sex workers.

Might I remind you, this is a one-woman show, yet Jones played each character just as well as the next. To say her transitions from character to character were smooth would be an understatement. Believe me when I say watching this all unfold in front of your own eyes is unbelievable. She truly mastered each person to perfection. 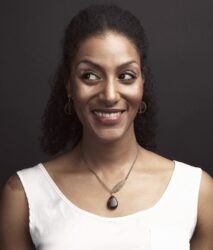 If you haven’t picked up on it quite yet, Sell/Buy/Date is a social commentary. Despite the seriousness of the topic, however, the play is extremely amusing and fun, leaving me waiting for each new character to be introduced. It’s sardonic, witty and highlights some of the major issues regarding the exploitation of women in today’s society. We were able to hear from various voices Jones brilliantly hit right on the nail. Unfortunately, Jones only performed a tidbit of the entire thing, leaving the audience and me craving to know the rest of the story.

Luckily, Jones held a Q&A, a “playdate” she called it, which allowed us to dig deeper into the show, her thought process in creating it as well as any other questions the audience asked. Before the questions started, Jones showcased a myriad of other characters: a Muslim woman, a hip hop artist, a Native American elder man and others. With her characters she talked about her own experiences and current events and issues (Women’s March, Standing Rock, Black Lives Matter). She continued to keep these characters out to answer several questions, a fun little plus for staying past the show. And yes, we did get to hear her real, actual voice by the end of the night. She really could’ve fooled me for a British woman, though.

After Jones’s standing O, students were overly pleased with the performance. Maria Vasquez, a second-year at UCSB, had only attended for her theater class, but enjoyed the show more than she expected to. “I feel very hopeful,” she answered when asked how the show had affected her. Second-year Araceli Chipres, nodded in agreement, “It’s reassuring that other people are talking about these issues.” I can’t help but agree. Jones gives us hope toward a future similar to one she has created, where sex working has become normalized and the objectification of women is no longer a problem (looking and sounding young at the age of 80 would be nice, too).