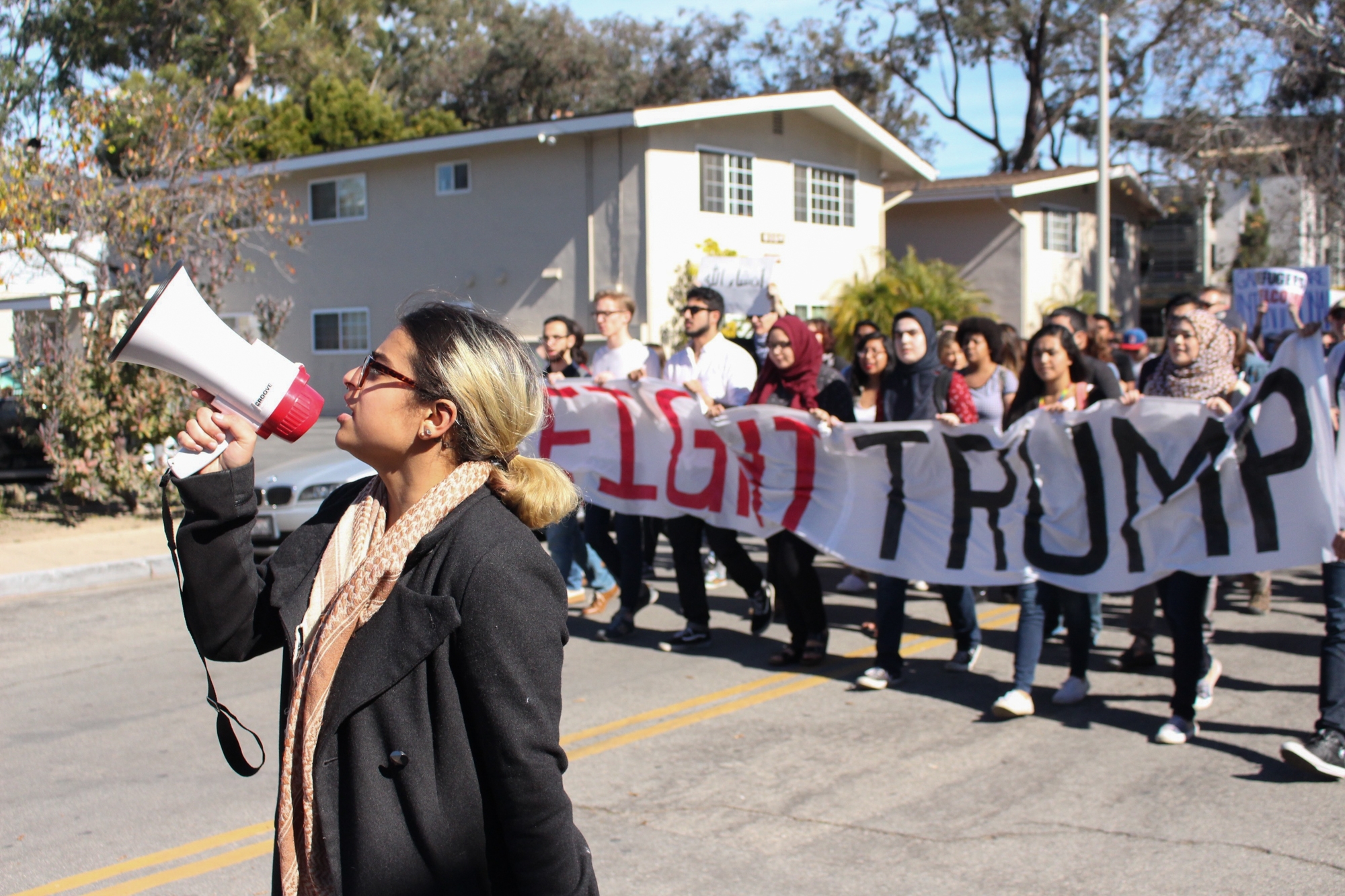 Naia Al-Anbar, the organizer of the protest, rallies the crowd as they march through Isla Vista. Megan Mineiro / Daily Nexus

An executive order barring travel from seven countries prompted over 200 people to protest at UC Santa Barbara Monday, echoing voices that spoke out nationally against the new presidency.

As reports of detainees began to surface at airports throughout the country, Naia Al-Anbar, a Muslim woman and third-year anthropology student, began organizing a protest march at UCSB.

Both of Al-Anbar’s parents are immigrants: her mother gained U.S. citizenship after immigrating from Mexico and her father currently holds a green card from Saudi Arabia.

“I was just furious,” Al-Anbar said when she was reading the executive order. “When you push someone to the very edge … you want to be a part of a group that is just as outraged as you are.”

Working with Queers Against Fascism, the Muslim Student Association and the Student Activist Network, she put together the protest in two days.

Rallying the crowd at the beginning of the protest, organizers described themselves as “unapologetically Muslim.” Heeba Saleem, a fourth-year literature student, quoted the Quran saying, “verily, with every difficulty, there is relief.” 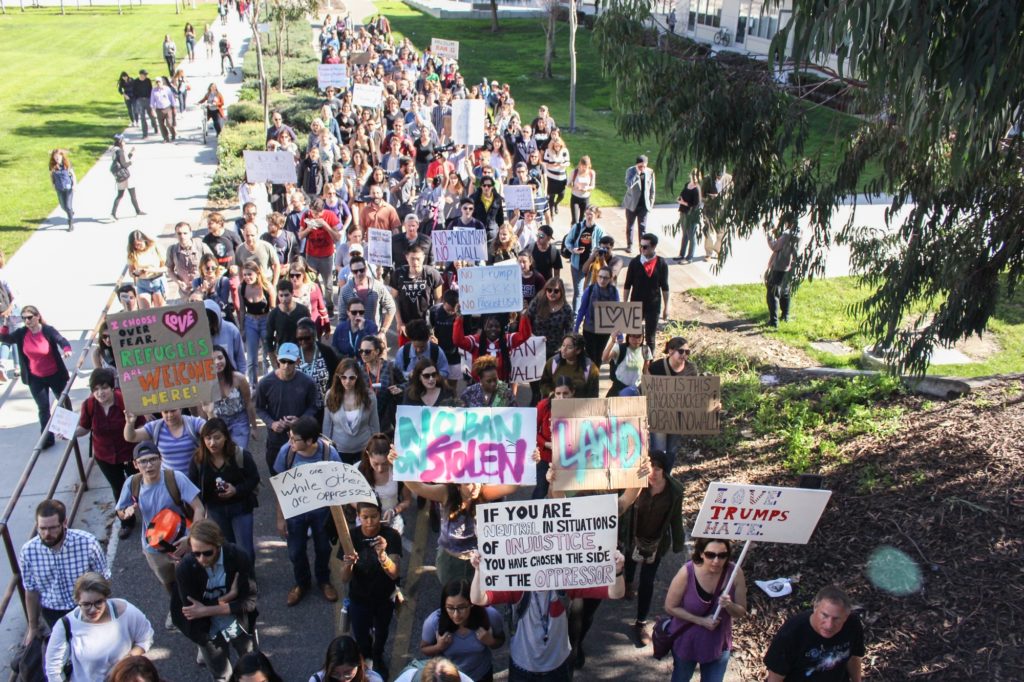 Students, faculty, families and a few children were assembled in front of Storke Tower on Monday with colorful signage denouncing Trump’s executive order. A sign referencing a Holocaust poem read, “First they came for the Muslim…” Another read, “E Pluribus Unum.”

Though the gathering was smaller than the student walkout against Trump that occurred one week prior, a marching stream filled Pardall Road as it looped around People’s Park.

Joan Hartmann, third district county supervisor, urged students at Pardall Center to “stand with their neighbors” despite heightened federal action. “We’re mad as hell and we’re not gonna take this,” she said, speaking against the Trump administration.

“We cannot watch, we must make our voices heard,” she said. “Liberal democracy is under assault in this administration.”

While students rallied in Isla Vista, protests were ongoing at international airports in San Francisco, Los Angeles and New York. Several detainees were elderly parents and professors, including those who have legal visas and green cards.

Tension between the Trump administration and Muslim countries has spurred fear in many U.S. citizens with Middle Eastern heritage.

Al-Anbar clearly remembers the morning of September 11, 2001, when her family was awaiting chemotherapy for her mother in a California hotel.

After they heard about the attacks, Al-Anbar’s father rushed the family back to their home three hours away. The family didn’t leave their home that week in fear of violence, she said, and she has stayed indoors after every terrorist attack since.

“It’s about to go off,” Al-Anbar said, saying the immigration ban created a “punching bag” out of Muslim people. “We aren’t waiting for it to happen before we react, we want to be prepared.” 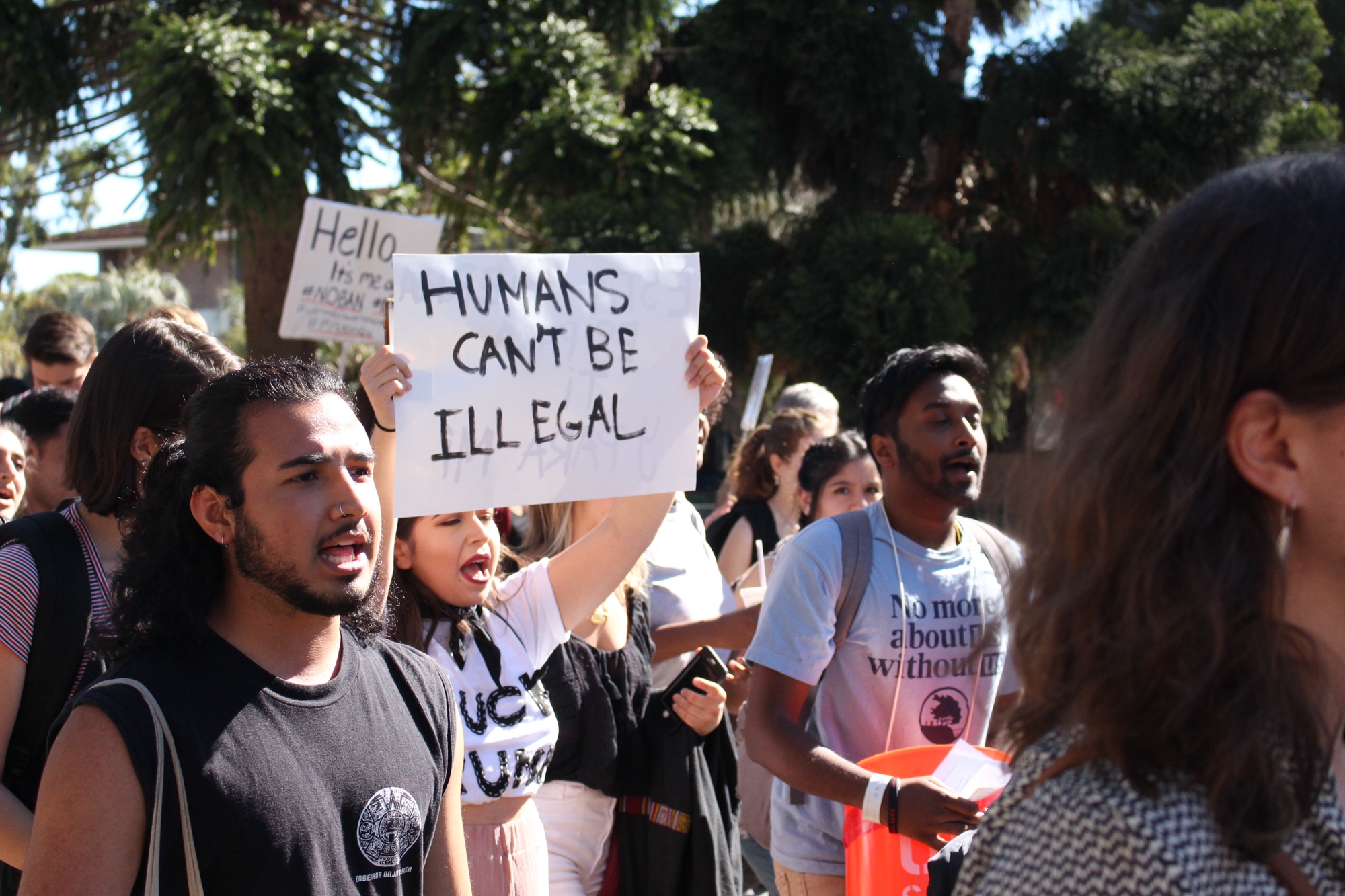 Al-Anbar, who describes herself as a “secular Muslim,” said she appreciates Islam because of its flexibility. She has tattoos and identifies as queer, but believes Islam taught her to support people of all race and religions.

Following the protest Monday, Al-Anbar led a public forum at the UCen to discuss productive protest tactics. The Queers Against Fascism group hopes to act as a hub for several activist groups, hosting what Al-Anbar describes as “protest boot camps.”

The sessions will include medic training and certification, psychological training and pepper spray exposure to prepare for situations involving riot police.

Al-Anbar said she has received support from faculty, and returned to several emails from professors after the protest thanking her for organizing the event. Associated Students and UCSB administration released a statement Monday saying they would prioritize assistance for any students affected by federal agencies, and the UC released a similar statement Sunday.

“Today was an indication of how much people are willing to go and take that step,” Al-Anbar said, adding that self-critique is essential to proper activism. “The goal of this is to create a coalition of student organizations that committed to being part of the resistance — anything that threatens the lives of others.”

I’m all for fighting the Muslim Ban, but it’s a bit more than bad taste to rewrite the poem about coming for the Jews in the Holocaust during this time of Holocaust commemoration.

History is important. Don’t whitewash it. Find your allies and work together. Don’t build your own walls of ignorance. It takes two to Tango. These are important lessons.

It’s too bad Muslims never march when people around the world are routinely terrorized in murdered in the name of Islam. That’s probably because they are afraid. But with good reason, since they know that other Muslims would behead them, just as Muhammad himself instructs in the Quran.

Do you take personal pride in routinely proclaiming and displaying your stupidity on Nexus forums?

Do not bother to answer (your attempt would just be more idiocy and, possibly, profanity). The the answer to my question is trivially obvious.

I’m sorry, are you saying Muslims do protest terror and muder by other Muslims? I haven’t seen that.

I don’t understand the protests on this. I’m totally for the ban. Anyone who’s parents and grandparents were born in America is for this ban.

Thank you for speaking on behalf of an entire (very large) subset of the population.

And,as with such moronic proclamations, I am a clear exception to your assertion — thus falsifying your idiotic claim at the get go.

One thing I do agree — “you don’t understand…” Excellent exercise of self-reflection.