At the conclusion of the ITA Kickoff weekend, the UCSB women’s tennis team went winless in its two games against No. 13 Texas Tech and the No. 16 University of South Carolina.

The Gauchos are now 0-3. Meanwhile, Texas Tech improved to 2-0, while South Carolina sits at 4-1. 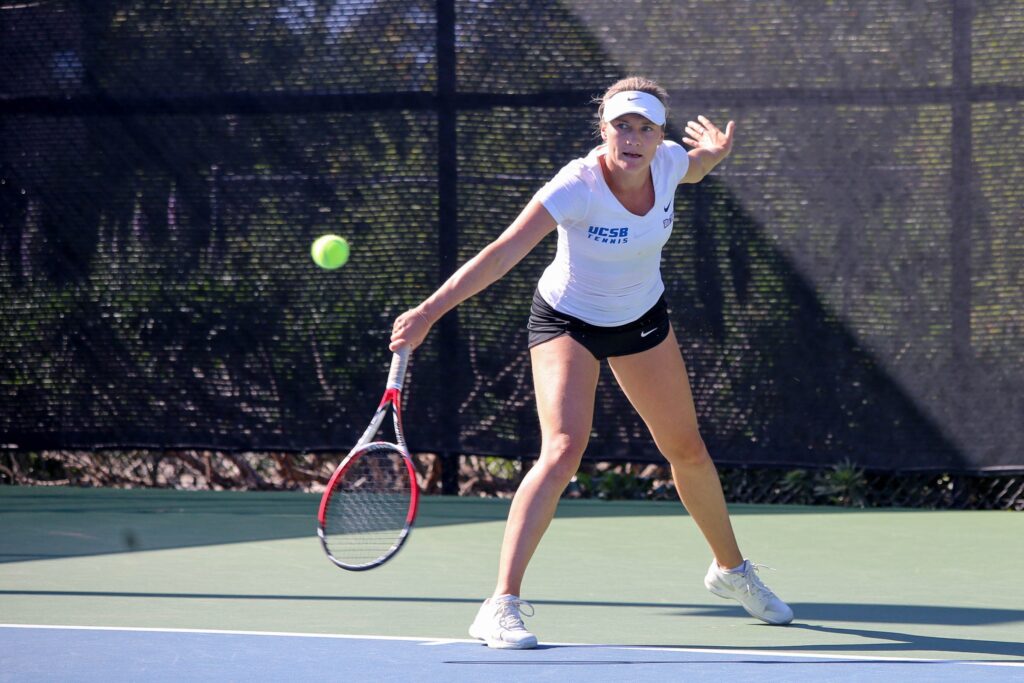 UCSB began its slate of back-to-back games against a talented Lady Raiders squad on Saturday in its first match of the weekend.

The meet started with doubles play where the Gauchos were able to showcase the talented doubles pairs on the roster – standout pair senior Stefani Stojic and junior Palina Dubavets – who played Texas tech tandem Lynn Kiro and Alex Valenstein in a match that saw the Gauchos win 6-3.

The next doubles match saw the Gauchos No. 33 ranked pair senior Melissa Baker and sophomore Stephanie Yamada play Texas Tech’s own No. 14 ranked Sabrina Federici and Sarah Dvorak. Baker and Yamada matched up well against Federici and Dvorak, but the UCSB pair eventually lost 7-5 after having an extremely competitive match.

With doubles victories all tied up at one, it was up to Gaucho tandem junior Natalie Da Silveira and senior Jaimee Gilbertson to clinch the doubles point for their squad. Da Silveira and Gilbertson were able to do exactly that as they came away with a victory against Lady Raider pair Felicity Maltby and Gabriela Talaba with a score of (7-6), 7-4.

The Gauchos doubles play proved strong against a Texas Tech squad which was a formidable test but not enough to take away the doubles point from UCSB.

In singles play, the first match of the meet to finish saw TTU’s Katelyn Jackson defeat sophomore Stephanie Yamada: 6-2, 6-0. The second match to finish was Sabrina Federici and Amanda Atanasson where Federici was able to win the game in two sets with a score of 7-5 and 6-1. Stojic later lost to Sarah Dvorak in the third match where Stojic was competitive in the first set but later lost in two straight sets at a score of 7-6 (7-5), 6-2

After three matches, the Lady Raiders were leading singles play with three victories and it was up to the Gauchos to find a way to end the Lady Raiders’ winning streak and pull out a victory in the remaining matches.

As the match progressed, No. 26 ranked Gabriela Talaba defeated UCSB’s Dubavets by set scores of 6-4, 3-6 and 6-2, extending the winning streak to four.

With Talaba’s win Texas Tech was able to come away with the victory in doubles play, despite the Gauchos winning the final two games.

The Gauchos did well in doubles play but were unable to get anything going in singles play which saw only two Gauchos, Jaimee Gilbertson and Natalie Da Silveira, leave with a victory.

The Texas Tech Lady Raiders defeated the UCSB Gauchos 4-2 in overall play leaving the Gauchos with a loss after the first day of play.

The second day of play began on Sunday which left the Gauchos to face the South Carolina Gamecocks, who picked up a loss in their match against the Arizona State Sun Devils the day before.

Doubles play began the day, which saw the Gamecocks come away with the victory as they won two of the three games. In the first match the Gamecocks’ pair of Hadley Berg and Paige Cline defeated the Gauchos pair of Stojic and Dubavets handily at a 6-1 finish.

The Gauchos responded with a victory as Baker and Yamada defeated Brigit Folland and Caroline Dailey 6-2.

In the deciding game to win the doubles point, the Gauchos fell as Gilbertson and Da Silveira lost to Rachel Rohrabacher and Mia Horvit.

In singles play, the Gauchos were looking to bounce back but were yet again met with a tough challenge as Texas Tech gained an early 3-0 lead, leaving Dubavets as the only winning Gaucho in singles play.

The Lady Raiders’ Brigit Folland, Hadley Berg, and Silvia Chinellato defeated their opponents and contributed to the team’s overall victory with a final score of 4-1.

The Gauchos were expecting to play against some very tough opponents during ITA Kickoff Weekend, and combined with an inability to succeed in singles play, contributed to the team’s disappointing performance.

Positives for the Gauchos were in doubles play as they came away with one doubles point and were competitive in their loss of the doubles point to the Gamecocks.