For decades, the race to find a cure for cancer has been an arduous, seemingly endless uphill battle. Scientists have spent countless hours conducting biological and chemical experiments to try to figure out the mechanics behind the proliferation of cancerous cells that quickly harden into tumorous growths. However, the key to solving the puzzle may lie in the approach. Should it not follow that a study of the mechanics of cell growth and development should be tackled from an engineer’s perspective?

Our understanding of the mechanics of cell growth and the interactions of a cell with its environment and with surrounding cells is far from complete. In fact, it is rather shallow, scattered and almost nonexistent. However, Professor Otger Campàs of the UCSB Department of Mechanical Engineering is pioneering new technologies for the study of the poorly understood processes of the mechanics of cellular development.

Professor Campàs was recently awarded the National Science Foundation’s CAREER Award for this novel advance in the field.

It is his background in mechanical engineering that has allowed Campàs to take this new approach and develop unprecedented techniques for the study of these systems. 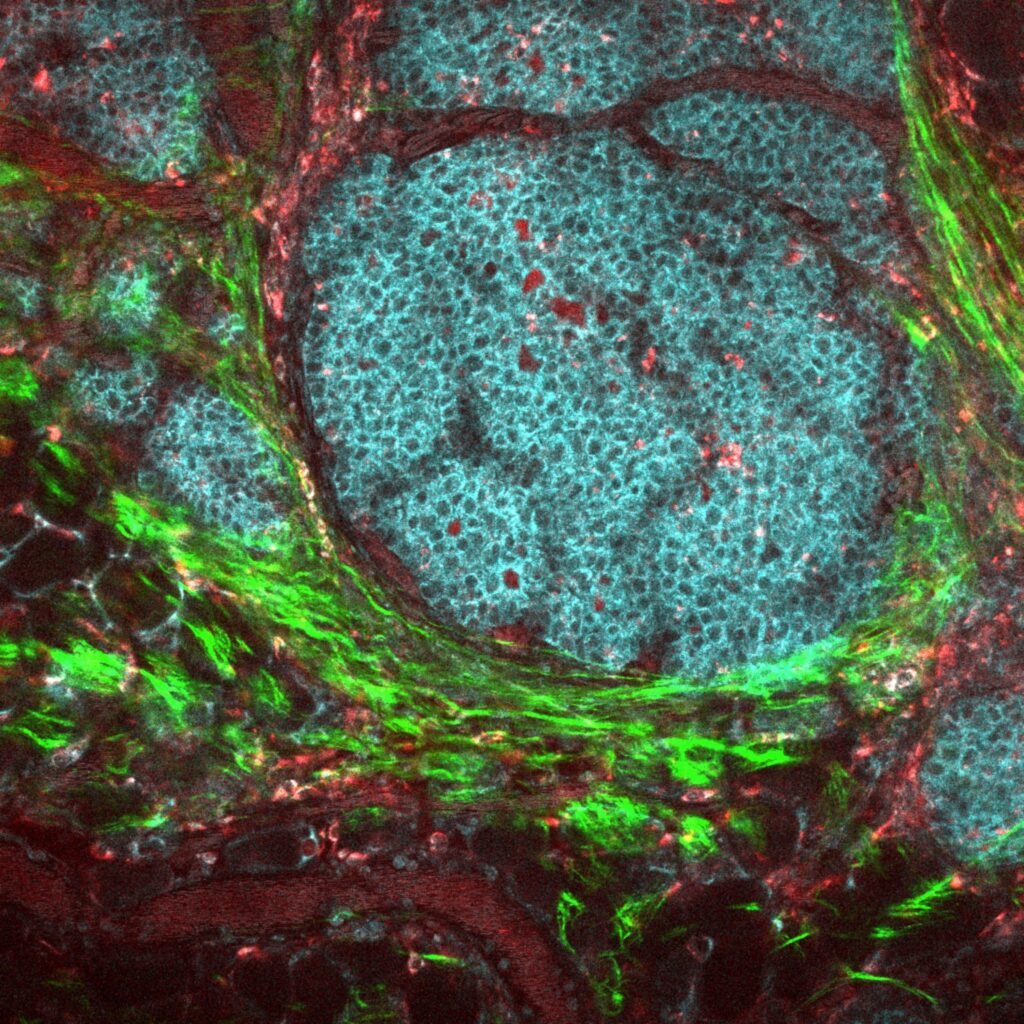 Similar to Campàs’s research, this image of a breast cancer tumor and its microenvironment was obtained from a live mouse model using multiphoton microscopy and endogenous fluorescence. This technique has important clinical potential for patients who require label-free imaging, and may lead to more effective diagnoses and treatments. Courtesy of nih.gov

Though the science involved in researching these kinds of systems at such a small scale is incredibly complex, Campàs and his team have managed to generate and implement methods that facilitate the observation of mechanical perturbations and their effects on cell growth at a microscopic level.

However, developing and using this new technology, which consists of a blend of biology and engineering, is not without its complications. In fact these complications are only further exasperated by the fact that the team’s research must be conducted at the cellular level in a material that is alive and therefore constantly sensing and responding to changes in its surroundings.

“It actually took our team three to four years to develop the technique,” Campàs said. “It’s challenging because you’re trying to measure something that physicists have measured for a long time in inert materials. Now you’re trying to do it in a material that is shaping itself into complex three-dimensional shapes, and you’re trying to do that at the scale of the cell.”

The potential benefits of Campàs and his team’s discoveries extend beyond the fields of human physiology and cell biology. By being able to understand the mechanics of a cell’s growth patterns and its interactions with surrounding cells, other scientists may be able to use this data to study a multitude of different diseases that involve irregularities in cellular development.

“There are two types of applications. One is more at the basic science level, which is to try to understand how our tissues and organs are forming in three dimensions; how they are building themselves into these structures that are functional,” Campàs said. “Then there are other applications, particularly medical applications. There are many diseases that display abnormalities in tissue mechanics that then affect the cell behavior. Also the progression of disease, the hallmark case of which is tumor growth.”

Understanding the mechanisms with which cells interact with one another to form the complex structures that make up tissues and organs in the human body may allow medical scientists to treat a number of ailments. For example, by understanding the physics behind the stiffening of cardiovascular tissue, doctors may be able to treat and prevent a number of cardiac illnesses.

Cancer research is undoubtedly the most pressing of the applications of this research and the one with the greatest multitude of discoveries stemming from these studies. It is this application that has garnered the most attention amongst the scientific community.

“For a long time people have been trying to understand how mechanical cues affect the growth of the tumor. Because it is obvious that the tumor actually stiffens and it is very clear that it is a mechanic effect. People have shown that cells actually react to that; the problem is that we don’t know how it happens.”

The National Science Foundation’s Faculty Early Career Development CAREER Award is presented to “junior faculty who exemplify the role of teacher-scholars through outstanding research, excellent education and the integration of education and research within the context of the mission of their organizations.”

“What we’ve done, essentially, is develop techniques to be able to go into these living tissues and see, locally, what it is that these cells are perceiving as mechanical cues,” Campàs said. “And obviously, with these techniques, we can also explore how they respond to their mechanical environment.”