The Daily Nexus
Sports
UCSB Loses Big at Home Versus CSUN
January 26, 2017 at 5:04 am by Quinn Moslander

The UCSB men’s basketball team just could not quite hold off the CSUN Matadors on Wednesday, losing at home 78-57. After an evenly matched first half, it was a disappointing loss for the Gauchos who are now 3-15 overall, 1-5 in the Big West.

Matador sophomore forward Rakim Lubin started off the scoring one minute in, but as both teams struggled to find their rhythm, scoring did not pick up until 16:32. There was great ball movement by the Gauchos; every player on the court touched the ball and collectively were able to break down the CSUN defense. 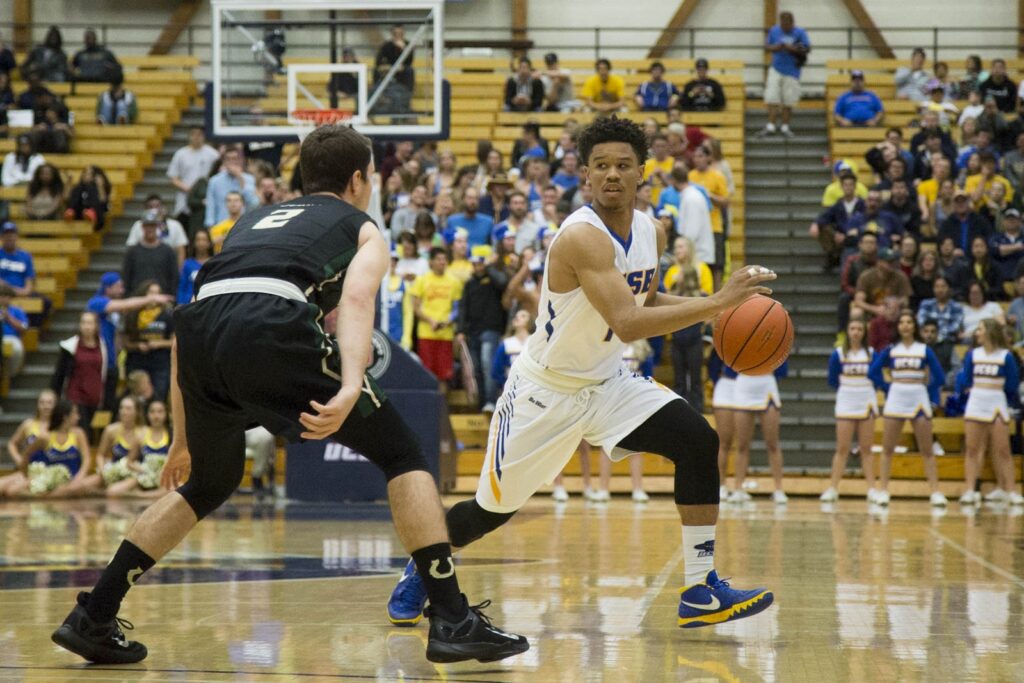 “[The players] said to me ‘Coach, if we get to that third screen they kind of surrender defensively’”, said UCSB Head Coach Bob Williams, “and so getting to that third screen and making the guys have to defend you a  third time up top, it was pretty productive for us the first half”.

At the 10-minute mark, halfway through the first half, the score was low, Gauchos leading 15-13. No. 8 UCSB was putting up a formidable fight against No. 4 CSUN. The two teams crawled up the board basket by basket as both forced turnovers and tried to profit from them.

UCSB freshman center Tyler Jackson entered the game at 9:56 in his second-ever court appearance. Within 50 seconds he made a sweet steal, an offensive rebound, and 2-2 foul shots. With UCSB’s usual big players still out, Jackson has had large shoes to fill on the court.

At 8:38 CSUN redshirt junior guard Darin Johnson made a steal and had a fast break down the court, but he was no match for UCSB senior guard Eric Childress, who took the ball right out of Johnson’s hands, turned around and made a layup, sending Gaucho fans to their feet.

Surprisingly, one of CSUN’s most valued players — redshirt junior guard Kendall Smith — was not making as many moves as expected. Averaging 16.5 points per game in the regular season, he only scored one basket the entire first half.

On the other half of the court, team leader junior guard Gabe Vincent was on fire, going 4-6 in three-pointers. Dominating the court on defense as well as offense, he managed to put 16 on the board before the half ended and was able to tap into energy the Gauchos so desperately needed.

This was a historic night for Vincent as well as UCSB basketball. With 4:11 left in the first half, Vincent made his 183rd career three-pointer, passing Gaucho legend Orlando Johnson and becoming number nine on the UCSB all-time top 10 list of three-pointers made. He went on to finish the game with a total of 185 completed threes.

As the half went on the Gauchos seemed as though they knew what they wanted to do, but just could not get the shot off. Lots of time was spent handing off around the three-point line with few drives, but UCSB held its ground.

After such an evenly matched half, the last two minutes were startling as the Matadors found their stride. Scoring seven points in one minute, the Matadors flipped a switch and were able to run all over the Gauchos without resistance.

Aside from two more three-pointers made by Vincent, the Matadors increased their score by 13 points in just over three minutes, leaving a shocking halftime score of 36-32.

Unlike in the first half, CSUN came out of the gates guns blazing as the second period started. For every shot a Gaucho took, the Matadors took two. All players were playing with heart, but the Matadors were simply moving faster and shooting more accurately.

With Childress and Vincent missing shot after shot, it was clear the Gauchos had lost their groove and were struggling to pick their heads up. After Vincent’s brilliant first-half performance, going 0-7 in field goals made for a disappointing second half.

UCSB freshman guard Max Heidegger was a firecracker with impressive ball handling, hard drives and risky but successful shots. He especially shone in the second half when Childress and Vincent seemed burned out.

“We just have to be better”, stated Vincent, “I’m not sure what we shot tonight but I’m sure we didn’t shoot it well”.

Starting around the 13th minute with a three-pointer from junior guard Michael Warren, the Matadors were able to keep a steady 10-or-more-point lead for the rest of the game. Based on of the level of competition in this first half, this surge from CSUN surprised and devastated Gaucho fans.

As the second half dragged on and players on both sides of the court continued to get more and more frustrated, the roughness of play also increased. Although CSUN players were on the floor multiple times in the first half, many Gauchos joined them in the second half. They finished the game with 17 Matador fouls and 20 Gaucho fouls.

To top it all off, both Lubin and Smith dunked in the last five minutes of the game, only furthering the frustration of the home team. Lately the Gauchos have not been able to keep up the energy and precision of play as games wind to an end, a flaw that was unfortunately on display in this most recent game.

“We just have to be better”, stated Vincent, “I’m not sure what we shot tonight but I’m sure we didn’t shoot it well”.

Although it was another conference loss piling onto the disappointment of losing at home, the first half of the UCSB-CSUN game gave Gaucho fans hope. The men’s team will have the opportunity to win their first game away when they challenge No. 7 University of Hawaii.