Dozens of individuals from all genders, ethnicities and sexual orientations packed into the dimly lit MultiCultural Center theater Tuesday night. Favianna Rodriguez, a critically acclaimed artist based in Oakland, came to UCSB to present “The Radical Imagination.” Her work revolves around issues of race, immigration, sexuality and environmental awareness. The artist/activist holds an astonishing list of awards and honors and has been featured in numerous exhibitions at revered museums, such as the de Young museum in San Francisco, California. In 2013, Rodriguez worked with i am OTHER, an artist network created by Pharrell Williams, on a documentary series about immigration policy and the perception of immigrants in the US.

Rodriguez began her presentation with a reflection on her childhood. The self-described feminist artist recalled being raised by two migrant parents and growing up in a household in which education was prioritized. While her Peruvian parents were academic advocates, the artist noted they fell short in other sectors of her upbringing. She remembered how anti-sexual her household was, a factor which later fueled her interest in sexual liberation.

Rodriguez got involved in grassroots activism as a teenager in the Bay Area. Throughout her youth in California, immigration legislation endured the clashing of disparate social and political standings. Rodriguez addressed this conflict and its relation to what the country is experiencing today. “Incalculable Latinx children grow up frightened by the evolving narrative of being ‘illegal’ in America,” Rodriguez explained. This is a narrative that has grown increasingly important and divisive in the wake of the election of President Donald Trump. “It just feels I have to go back to basics,” Rodriguez said, touching on how her art and activism is changing in response to recent events. “So even though we were moving along our pathway, it’s throwing us back … It’s simplifying the things we had actually made a lot of movement on.”

In present times, artists and activists like Rodriguez are as important and integral to social justice as ever. The rights of many are lost in a state of vulnerability. Basic human rights are under siege. As a trailblazer and innovator in her field, she encourages the country’s youth to get actively involved in any way possible. 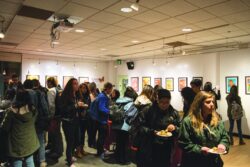 Rodriguez initially kept her artwork and activism separate from each other. She acknowledged a duality between the two elements in her life. It was not until later on in her life and career that she merged the two forces and began using her art for social justice. Rodriguez subscribes to the belief that everything we see, do or consume is in some way culturally flavored. The passion Rodriguez exhibits for cultural advancement is remarkable. She emphasized that without cultural change there is no room for political revolution.

Various examples of Rodriguez’s art were on display during the lecture. One piece, entitled “Raw,” addressed the process of unlearning the white supremacy ingrained in her at a young age. Other artwork addressed the natural process of migration and improving the dietary habits of black and brown communities across the globe, things she personally links to climate change. Rodriguez claims climate change is one of the most important issues we are facing today, if not the most important issue.

As a queer woman, Rodriguez has done a substantial amount of activism in the LGBTQ field. She spoke about evolution of minority representation in art and media, an evolution that functioned through a series of cultural interventions. “It’s a crime how underrepresented we are,” Rodriguez said with great passion and genuineness. The cadence of her voice encapsulated how she felt about the subject, and that feeling was vividly translated through her visual art.

Something to note about Rodriguez is how incredibly charismatic she is. Throughout her lecture, she asked provocative yet thoughtful questions that inspired curiosity from the audience. The artist spoke comfortably and with ease. Her talk was humorous, saddening, inspiring and challenging. A lengthy Q&A session followed in which she encouraged people of all kinds to interact with her and ask whatever came to mind. In response to these queries, the artist provided candid and animated replies packed with personal advice, insight and experience. Afterwards, the crowd gathered next door to view Rodriguez’s exhibition, which allowed her ideas to come to fruition in a creative manifestation of progress. The creations themselves showed that art and activism remain tools humanity will always harbor, that can’t be revoked. It is up to us to use these instruments in a productive, creative and inspiring way.