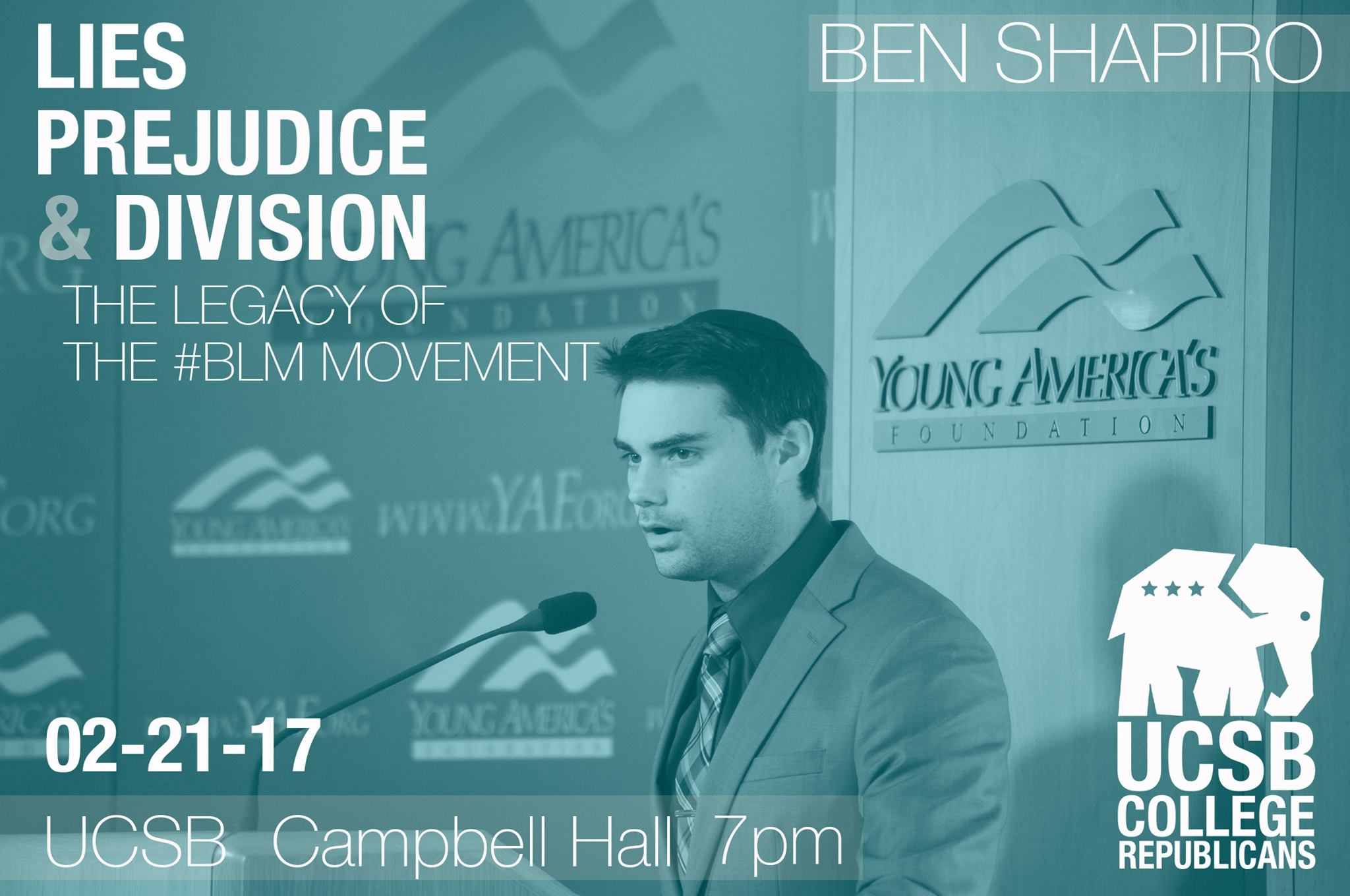 The event, titled “Lies, Prejudice and Division: The Legacy of the #BLM Movement” has sparked controversy on campus since it was first announced that the A.S. Finance and Business Committee granted $5,000 in funding for College Republicans.

Shapiro graduated from UCLA and Harvard Law School and is known for writing several non-fiction books and serving as the editor in chief of The Daily Wire.

Based on Shapiro’s views, the event’s Facebook description says the Black Lives Matter movement has had a “disproportionate – and overwhelmingly negative – impact on the political climate in America” since it first rose to popularity in 2012.

Many students reject Shapiro’s stance and believe his views are damaging to the progress of minority groups. Following a six-hour A.S. Senate meeting, students protested the senate’s decision to approve the finance committee’s funding.

Shapiro, who last spoke at UCSB in 2013, has been banned from speaking engagements at other universities and was escorted off the CSU Los Angeles campus in May 2016 due to protests.

Students and faculty who do not support Shapiro’s speaking  engagement have suggested protest, alternate programming and solidarity movements to counter the College Republican’s event.

Others believe it is unconstitutional to prevent Shapiro from speaking at UCSB due to his controversial dialogue, and say free speech must be upheld on college campuses. College Republicans secured Campbell Hall to host their speaker with additional financial support from the Young Americas Foundation.

‘Many’ implies greater than 50% of students or the majority, so either provide a source statistic, or stop attempting to speak on behalf of the entire student body.

And “some” has no quantitative implications. Provide your source statistic or admit you are too ignorant to see the conceptual equivalence of the stance you take and that which you reject.

Correction. The first sentence of the above post was a question and needed a question mark.

BTW: To ward off any silly attempt at self-justification (e.g., I used “some” as a predicate, because, unlike “majority” the word has no commitment to specific quantification”), you could have said “many” (a far more reasonable substitute for “majority” in the absence of data given the standard talking point (by right-wingers) re the liberal biases of UCSB students).

Anyway, I now have reached my self-imposed daily limit on engagement with the cognitively challenged.

“Many” does NOT imply majority. E.g., many people in the country voted for Trump.

What are your classes like at La Patera these days?

“Shapiro… is known for writing several novels”? That’s either a mistake or a very passive-aggressive insult.

So do many intelligent ones. So, your point is what? That many reject his stance? thanks for your penetrating glimpse into the obvious.

Hopefully you and your other “intelligent” pals will have the courage to show up and debate Ben Shapiro. I’ll be the one eating popcorn and laughing at you.

The point is that if anyone actually listened (and understood) what Ben speaks about, they would have no issue with him speaking…but the ignorant don’t want to listen, don’t want to hear what he has to say, and judges him on their own biases. No intelligent person I knows rejects Ben’s stance…they may disagree with individual issues, but his points are clear, most are/should be common sense, and if you disagree with everything he says and stands for, especially without actually hearing him out, you are thereby ignorant by nature.

Ben Shapiro invites healthy debate, and when confronted with facts, the left generally gets tongue tied and reverts to “feeling” statements and name calling. He’s a strong and solid voice that is needed right now to combat the left.

So sad to have missed this, I thought it wasn’t happening until May :( At least UCSB didn’t appear to embarrass themselves to the degree that other campuses have in these kinds of events.