The Daily Nexus
Science & Tech
Astrophysicist Reaches For and Lands in the Stars
January 19, 2017 at 5:27 am by Stephanie Pernett 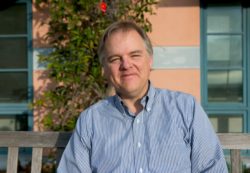 In addition to teaching and research, Bildsten is passionate about strengthening science and engineering education in grades 7 through 12. As a member of the board of directors of Santa Barbara’s Dos Pueblo Engineering Academy Foundation, he raised $3 million to fund the facility and support its math tutors. Anthony Lai / Daily Nexus

Lars Bildsten, the current director of the Kavli Institute of Theoretical Physics and physics professor at UC Santa Barbara, has been awarded the 2017 Dannie Heineman Prize for Astrophysics. It is awarded jointly by the American Institute of Physics and the American Astronomical Society and recognized Bildsten “for his leadership and observationally grounded theoretical modeling that has yielded fundamental insights into the physics of stellar structure and evolution, compact objects and stellar explosions.”

The prize is named after Dannie N. Heineman, an engineer, business executive and philanthropic sponsor of the sciences. The prize was established in 1979 by the Heineman Foundation for Research, Education, Charitable and Scientific Purposes, Inc. awarded annually, the prize consists of $10,000 and a certificate citing the contributions made by the recipient plus travel expenses to attend the meeting at which the prize is bestowed.

Bildsten joined the Kavli Institute for Theoretical Physics and the Physics Department at UCSB in 1999. Before coming to Santa Barbara, Bildsten earned his Ph.D. in theoretical physics from Cornell University in July 1991 and held a Fannie and John Hertz Graduate Fellowship. He then went to Caltech for three years as a research fellow in theoretical astrophysics.

As an astrophysicist, Bildsten researches the different phases of the lives of stars. His work includes entire lifespans of stars, from when they form to when they fade away or explode; however, Bildsten mainly focuses on stars that are undergoing quick changes, such as oscillations, explosions or increasing brightness.

Currently, Bildsten is exploring the life cycle of binary stars, a system of two stars in which one revolves around the other or they both revolve around a common center. Usually, one of these stars is more massive than the other in systems like this.

The more massive star burns its supply of hydrogen in its core faster than the smaller one which leads to it becoming a red giant, whereupon a thermonuclear fusion of hydrogen takes place. As suggested by the name, the star becomes bigger, and the expansion in radius can lead to mass transfer between the two stars. 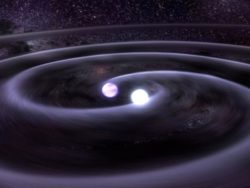 An example of a binary star system is shown above. The system above is J0806 where two white dwarf stars orbit each other every 321 seconds. Eventually, these stars will spiral toward each other and merge, which may form a supernova. Courtesy of space.com

“Sometimes the tides are big enough that material gets pulled off and added onto the lower-mass star, creating a mass exchange,” Bildsten said. “That mass transfer can lead to many, many different types of astrophysical outcomes that we are exploring.”

According to Bildsten, it can lead to rapid variability as matter tries to spiral back down to the smaller star and that’s when astrophysicists find the objects as variable stars in the sky.

“Other times, mass transfer adds enough material to cause the star to undergo a rapid thermonuclear transition in a matter of minutes,” Bildsten said. “Then we get a supernova that is brighter than the galaxy it’s in for a month. The possible outcomes from mass transfer are so diverse that any you can understand better is great progress.”

Another area of interest to Bildsten is supernovae, stars with at least 10 times the mass of the Sun that live only a brief amount of time. Brief being around 50 million years before exploding.

Like the binary star system, the star becomes massive due to its lack of hydrogen. It then collapses into itself and forms into a neutron star, one of the smallest and densest stars known to exist.

When a star starts to collapse and fall in upon itself, it encounters an extremely dense center. Once it reaches the center, it bounces back and sends out a shockwave that causes the star to explode. Whatever remain after the explosion is sent out into the galaxy at speeds between 5,000 and 10,000 kilometers per second.

Future endeavors for Bildsten include continuing to work with the Palomar Transient Factory, a Caltech-led observational collaboration. Bildsten notes the importance of collaborative research.

“Nearly all of my achievements have been through collaboration with my graduate students, postdocs or other prominent astrophysicists,” Bildsten said. “This has not only benefited my research, it has also served to broaden my intellectual horizons and push me in new directions. I thank them all!”