The Daily Nexus
News
UCSB Freshmen Applicants Hit All-Time Record in 2017 for New Class
January 12, 2017 at 5:42 am by Tamari Dzotsenidze

UCSB has set a record for the highest number of first-year applicants, up six percent from last year with a total of 81,782 applications. 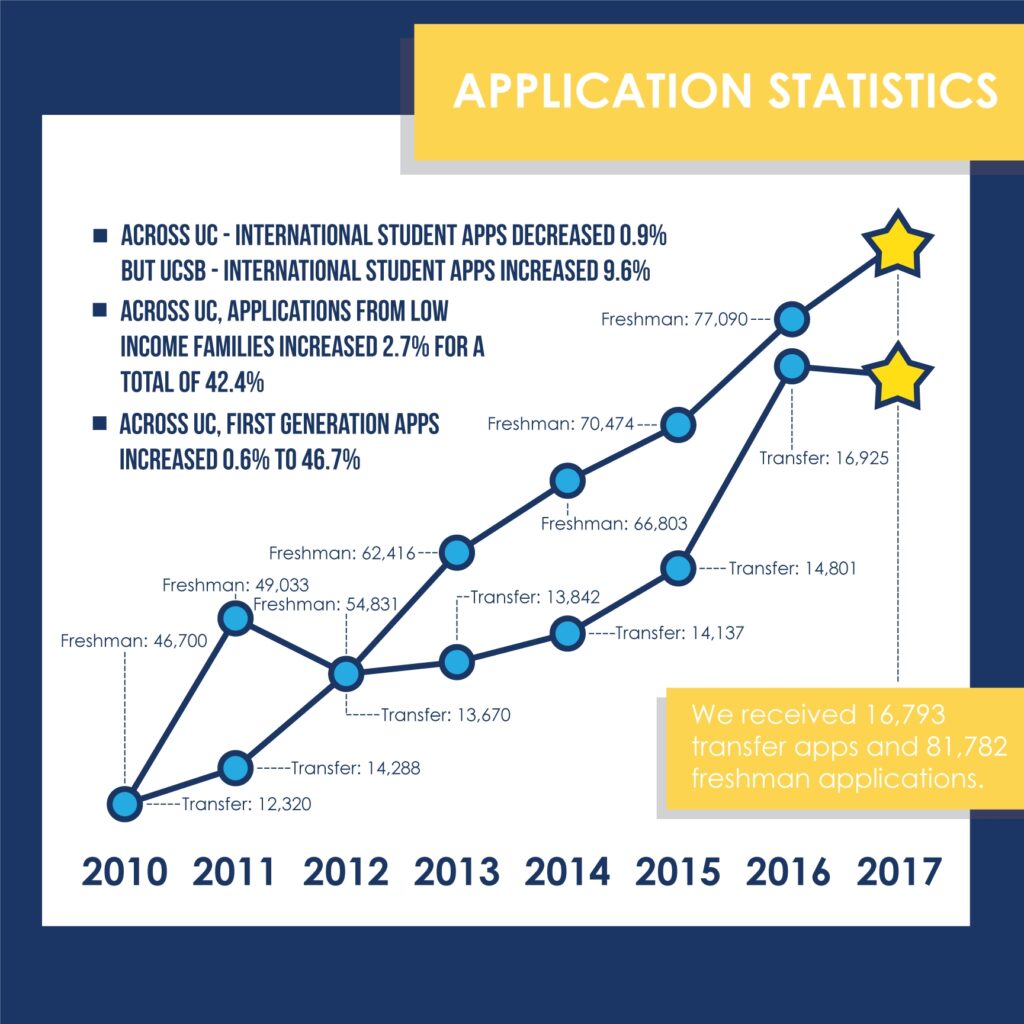 Fifty-five percent of applicants are from a racial or ethnic minority group, with African-American, Chican@ and Latin@ and Native-American applicants making up 30 percent of the applicant pool.

“As the prestige of our campus has grown and as our faculty and alumni receive global recognition, we are being discovered by more and more students outside of California,” Lisa Przekop, the director of admissions at UCSB, said.

“The increase of freshman applicants from low-income backgrounds is not a problem, but rather a positive development for UC,” Ricardo Vázquez, the UC director of media relations, said. “The UC system leads the nation’s top universities in economic diversity and we look forward to continue providing opportunities for more Californians regardless of income.”

In a conference call with UC journalists on Jan. 6, UC President Janet Napolitano said campuses will accommodate students by adding 14,000 more beds by 2020 and creating additional resources for graduate students.

“I know the campuses are cramming at the seams with the student growth and have fired a lot of faculty over the last year,” Napolitano said. “We asked for additional state funding for grad students last year. We didn’t get it. Nonetheless, we’re able to provide some more resources to the campuses for grad students, but that’s another thing we’ll be advocating for this year.”

“Each UC campus has its own enrollment priorities and strategies, so even though system-wide applications may indicate certain trends, that don’t necessarily reflect what our incoming class will look like,” Miller said. “I will say we are thrilled to see more low-income students applying to the UC.”

A release from the Office of Public Affairs and Communications shows stronger academics; 45 percent of freshman applicants have a high school grade point average of 4.0 or higher, with the average increasing to 3.86 from 3.84 last year.

Chancellor Henry T. Yang also said that UCSB is “unwavering” in its commitment toward accessible and affordable education for all UC students.

“When I talk with prospective students and their families, I hear about how students want to come here to learn from and do research with faculty who are the forefront of their fields, and to be part of a vibrant intellectual community with their peers,” Yang said in an email. “We are very pleased that our campus has attracted such a highly qualified and diverse applicant pool for Fall 2017.”