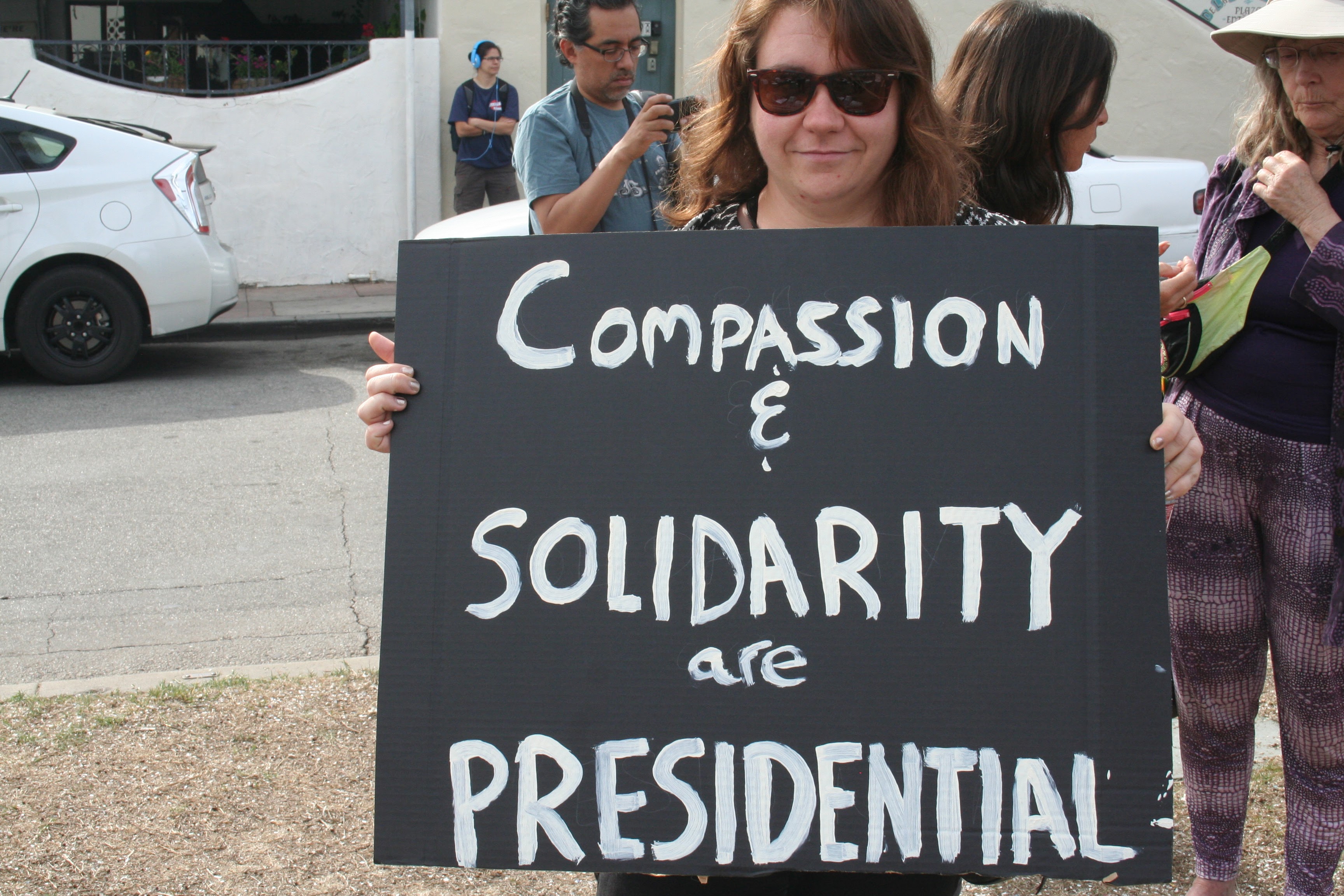 A woman holds a poster saying “Compassion and Solidarity are Presidential” during an anti-Trump rally on November 14, 2016. Josie Baez / Daily Nexus

A group of nearly 500 UCSB students plans to collectively walk out of their classes and homes at noon on Jan. 20 to march to Storke Tower in protest of the inauguration of President-elect Donald Trump.

The Santa Barbara Student Activist Network is hosting the “National Student Walkout Against Bigotry & Hate,” and it is one of many college campus marches that will occur throughout the nation in one week.

The intent of the walkout is to raise enough attention to relay their strong rejection of “bigotry, hate, and division” to Trump and the entire Republican Party.

Students hope to connect with one another in a time of great uncertainty by standing united in solidarity and by spreading a message of tolerance.

According to the event’s official Facebook page, the purpose of the walkout is to “demand with one united voice” the end of sexism, Islamophobia, police brutality and discrimination against the LGBTQ community.

“No work. No school. No business-as-usual on January 20th,” the page description states.

Participants of the walkout also intend to demand a tax on the wealthy to end student debt and make college tuition free.

The great Ben Shapiro speaks at University of California, Santa Barbara, February 21!!!
Be there! Or be a snowflake in your safe space.

Free tuition for all – I love it. My niece complains that the $40K+ in debt she incurred going to fashion school should be forgiven, mind you she decided a year or two in that she didn’t want to go to fashion school anymore. I’m glad only 500 students are participating in this nonsense.

Way to stay on point. Reading comprehension an issue? Or just reading?

glad I moved to Canada

How about we require students to pass a financial literacy test before they take out student loans? I’m continually stunned by the number of students who had no idea they had to pay the loans back. It makes me fear for the future of our country.

*Eyes Rolling* Grow Up! Your people voted for Trump for a reason: they are tired of you snowflakes always acting like a victim and censoring free speech, and they don’t want to pay taxes for you to act like toddlers. And you should thank your lucky stars that you aren’t in the Middle East where you may be shot any second.

Ah yes, of course. Let’s make the taxpayer not only subsidize the school, but also pay for your bullshit xyz identity politics studies degree.