Although director Damien Chazelle has only recently started his film career with 2014’s “Whiplash”, he has already began creating an impressive streak of great films. His latest feat, “La La Land”, focuses on aspiring musician Sebastian (Ryan Gosling) and actress Mia (Emma Stone), two lovers hoping to achieve their dreams in the lively city of Los Angeles. As soon as the words “La La Land” flash onto the screen, the audience is immersed into modern Los Angeles as seen through the lens of old Hollywood.

Because of its focus on Los Angeles life, Chazelle uses very distinct and contrasting colors in every frame to reflect the exaggerated Hollywood productions. Every color, even the most bleak, shine brightly on the screen. Sometimes, the scenes are constructed to look as artistic as possible. As Mia and Sebastian dance in the Griffith Observatory, they are silhouettes dancing gracefully in the stars, capturing the most dazzling moment in their relationship.In another scene, Mia and Sebastian run in from outside, with a beautiful painting serving as its entire background. Los Angeles is essentially its own living and breathing character, leading the audience to believe that the film is as extravagant as the city itself. However, this exaggerated style is layered over a realistic story.

There is a clear distinction between the romanticized life and the moment when reality starts to settle in for Mia and Sebastian. Whereas most films would put the characters in a situation where they would obviously reunite, “La La Land” questions Mia and Sebastian’s dreams. It asks how many opportunities Sebastian is willing to take even if the results are not entirely what he hoped for, as he would obtain merely fragments of his dream. Mia faces a separate problem, with her career testing her to see how much she truly wants to reach her dream. But surprisingly, the film does not handle this problem melodramatically, as both characters are satisfied with where they are in respect to one another, despite differences in their amount of fame.

This story and the themes are represented by the truly unforgettable songs in this film. Most of them sound like they are taken from an old Hollywood movie, as their instrumentals thump with the heart of jazz music. The dance numbers are very reminiscent of this style, while still integrating dance moves that are more modern. As the story progresses, the songs shift from loud and vibrant to subdued and personal. They both serve as a reflection of a certain point Mia and Sebastian’s relationship, and set the tone for the movie. Even though “City of Stars” has won “Best Song” in most award shows, any song nominated could likely win the award. The unique character given to the songs is also in the score, which is used to create emotion so well that it could easily be confused music not intended for a film soundtrack.

Despite having only made one film prior, it can’t be too early to predict that Chazelle has potentially found his niche in music movies. This niche has proved successful for him, as “La La Land” took home all 7 Golden Globes it was nominated for, breaking the record for number of Golden Globes a single film has received. Indeed, while the niche of music movies may seem more contained than most reputations, Chazelle has nevertheless shown that he can take different angles on this niche based off his two films. While “Whiplash” was an intense drama about music, “La La Land” is a dazzling modern musical influenced by the large Hollywood productions of the past. With the overly exaggerated, yet impressive, choreography and understated character moments, it would not be surprising if this film was adapted into a Broadway production. Already, “La La Land” is basically demanding to be performed in theater. While “Whiplash” brutally pushed a character to his limits in a near impeccable story, “La La Land” pulls at your emotions to create a wonderful experience. 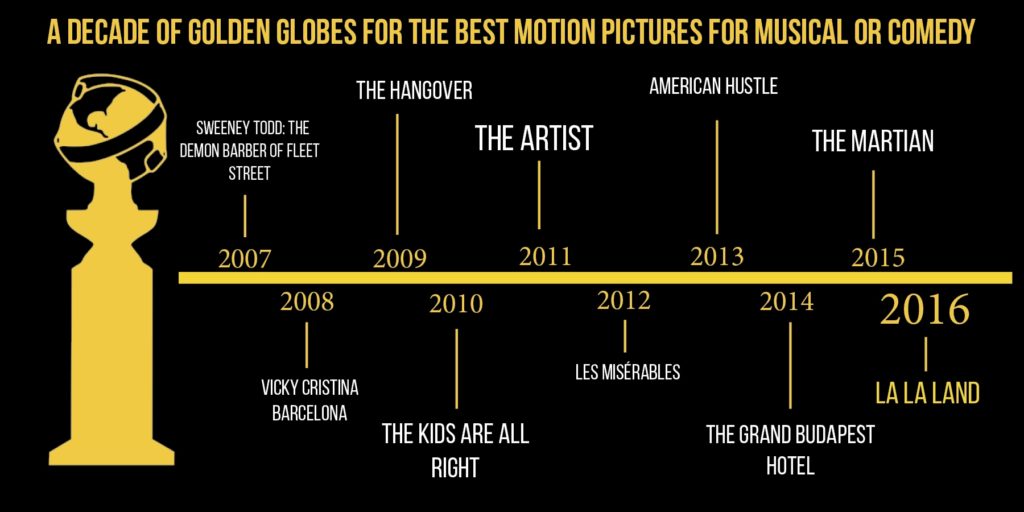