The Daily Nexus
Sports
Gauchos Eyeing First Conference Win of the Season
January 12, 2017 at 5:00 am by Jorge Mercado

Desperate to turn around what has been a lackluster season thus far, the UCSB men’s basketball team will have a great opportunity tonight as it faces off against UC Irvine at the Thunderdome.

Santa Barbara hosts the visiting Irvine team with an overall record of 2-11 so far and a 0-1 start to Big West play after a blowout loss of 73-47 at UC Davis last Wednesday. The Gauchos are currently in the midst of a two-game losing streak and have lost six of their last seven ball games. 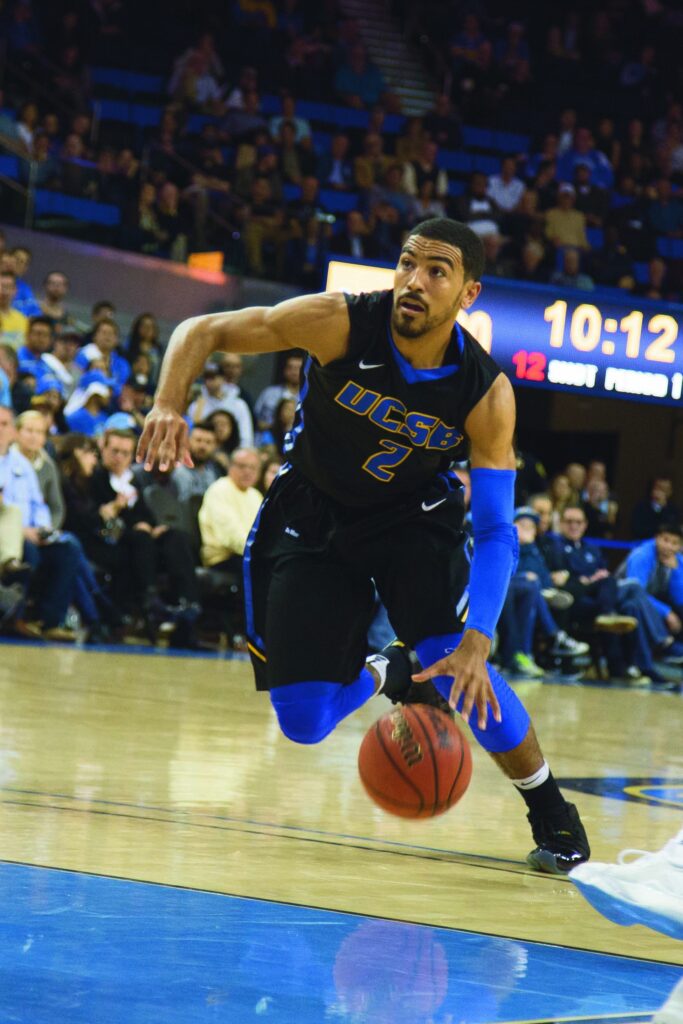 Gabe Vincent slips through a hole in the defense. Dustin Harris / Daily Nexus

UC Irvine comes to town boasting a 9-9 overall record and is tied for first in the Big West standing after a great first week of play in which it defeated Long Beach State and Hawaii, the teams favored to win the Big West this season.

Last year, the two teams split the season series with the road team being the victors in each outcome. Despite UCSB holding a 51-35 advantage all-time over UCI, the two teams have certainly been evenly matched over the past four years, splitting their last eight match-ups.

The Anteaters are the hotter team coming into this match, as they are winners of their last four ball games in which they averaged 82.2 points per game and outscored their opponents 329-223.

As a team, UC Irvine’s stats rank among some of the best in the Big West in different categories, proving it is a team that can excel in all facets of the game, as it is second in the league in blocks per game (3.8), third in rebounds per game (39.2) and fourth in assists per game (13.2).

Irvine’s scoring leader this season has been senior guard Jaron Martin who scores the sixth-most points per game in the conference, averaging 14 a game. On the rebounding side, sophomore forward Jonathan Galloway who ranks third in the Big West — second if you exclude UCSB’s junior forward Jalen Canty who is out indefinitely due to academic ineligibility — averaging 6.4 boards per game.

One of the two stats that which the Gauchos rank near the top in is rebounds per game. They are currently second in the Big West in that category averaging 39.4 boards as a team, but with the losses of their two best big man down low, Canty, and sophomore forward Ami Lakoju, to academic ineligibility, one could only surmise that they will not fare well much longer.

If UCSB has any hope tonight, then it will need a big game from junior guard Gabe Vincent. The former Big West Freshman of the Year is the team’s leading scorer and the Big West’s second-best scorer averaging 15.8 points per game. In five home games this season, Vincent has done significantly better from three-point range, shooting 36 percent from the field as opposed to 27.7 away from the Thunderdome.

Guard Max Heidegger would also be a welcomed addition. The true freshman has been a bit inconsistent this season but has certainly shown flashes of greatness, scoring 21 points in an overtime home victory against Cal State Bakersfield.

With a lackluster start comes huge scrutiny, and no one is facing more of Head Coach Bob Williams. Many fans have taken to social media to show their distaste for Williams after such a bad start to the season.

However, winning changes all fortunes and a huge victory against UC Irvine tonight would be a huge step in the right direction for everyone involved with this program.

UCSB faces off against UC Irvine at 7 p.m. on Thursday, Jan. 12 at the Thunderdome.