With the 2016 season concluded, the UCSB women’s volleyball team is reminiscing on a season filled with highs and lows. Finishing with a 17-12 overall record, the Gauchos split their 16 Big West matches 8-8. 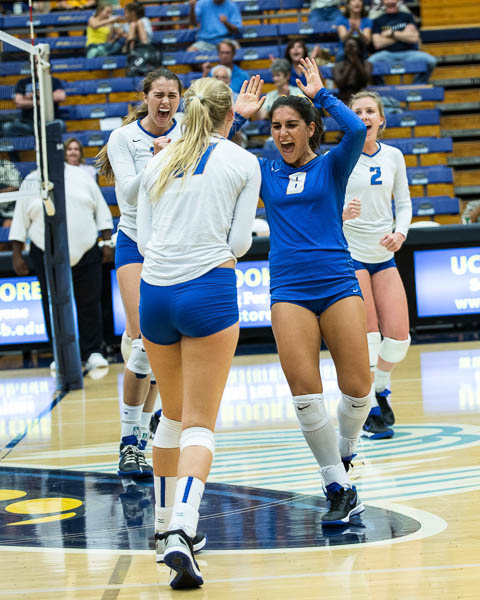 Emilia Petrachi celebrates with Devin Joos after a series of scrappy plays led to a solid kill. Eric Swenson/Daily Nexus

The team finished the early season non-conference schedule with a 9-4 record, poised to carry their impressive start into the conference schedule. The nine wins were enough to surpass the Gauchos’ entire win total from 2015, as the team was poised to make their presence felt in the Big West.

Early on in the conference schedule, the Gauchos hovered around the .500 mark, never being able to assemble consecutive wins.

After an upset loss to UC Riverside on Oct. 14, however, a fire was ignited in this group. They began a stretch of six wins in seven nights, their only loss at the hands of Long Beach State in a grueling five sets.

The exciting run gave the Gauchos a legitimate shot at the postseason, though it was squandered when a second matchup with UC Riverside ended exactly like the first, in a mystifying loss for UCSB. Riverside finished second to last in the conference with a 3-13 record, making the season crushing loss even more confusing for the Gauchos.

With the wind taken out of their sails, the Gauchos were still presented with an opportunity to reclaim a spot in the NCAA postseason. A win against the nationally ranked Hawaii Rainbow Wahine would have given UCSB an inside track to the playoffs, but the Gauchos weren’t able to overcome the Big West Champions, dashing their postseason hopes once and for all.

UCSB concluded its season against UC Irvine, but the group appeared depleted from the two previous devastating losses, never showing much fight and getting swept by the Anteaters.

Though the Gauchos will fall short of their preseason playoff goals, the plethora of young talent on this UCSB team is unmistakable.

“We have a big group of returners which is certainly exciting for this group,” Coach Nicole Lantagne Welch, noted. “We have a group of young women that have high goals and aspirations for where they want to take this program.”

First among those young women is redshirt first-year outside hitter Lindsey Ruddins, who after putting up season averages of 4.09 kills per set, a .246 hitting percentage, 2.08 digs per set and 0.31 service aces per set, was named Big West Freshman of the Year. Ruddins also earned a spot on the All Big West First Team.

She will play a pivotal role on the team moving forward, and the Gauchos will need Ruddins to build off her fantastic first year and continue developing into possibly the Big West’s most potent outside hitter.

“Lindsey was a big time point scorer for us this year,” Coach Lantagne Welch, said. “I can only see that [improving from here].”

Lantagne Welch continued, “[Lindsey] had one of her best matches at Hawaii against some of the top competition in the country. I know she can grow in certain areas, [such as] being really effective on back to back nights.”

Ruddins success is exciting for the Gauchos’ future, as Coach Lantagne Welch explained how much room the redshirt first-year has to grow. “[Lindsey] has so much room to improve still. She started taking on a bigger roll passing towards the end of the year, and that’s something she’ll want to grow with and get better at, along with her defense.”

Alongside Ruddins on the Big West All-Freshman team was fellow Gaucho freshman middle blocker/right side hitter Rowan Ennis, who started all nine conference matches and finished the Big West schedule with 2.29 kills per set on a .253 hitting percentage. She, too, will play a vital role in the Gauchos’ offense moving forward after showing that she was more than prepared for the collegiate stage.

Despite another season ending injury, junior outside hitter Chanel Hoffman still received an Honorable Mention for the All-Conference team, and for now, she’ll enter next season as the only senior on the team.

Senior Elizabeth Sheffield also received an Honorable Mention for the All-Conference team, a heart-warming development for the middle blocker who spent her first two collegiate seasons with the UCSB club program before joining the team last year.

The Gauchos have many other cornerstones to build upon for 2017. Sophomore Emilia Petrachi was the most productive libero in the conference, and redshirt freshamn Hannah Juley proved herself as a permanent option at the setter position for UCSB for the next three years.

“I know our culture and team chemistry is excellent,” Lantagne Welch concluded. “We made a lot of strides in the right direction this year, and we gained a lot of experience. Now it’s just going to be using that experience to get better and grow as players.”

The end of the season begins the process for next year, as the Gauchos will look to build off their improvements this year to become one of the premier teams in the Big West in 2017.