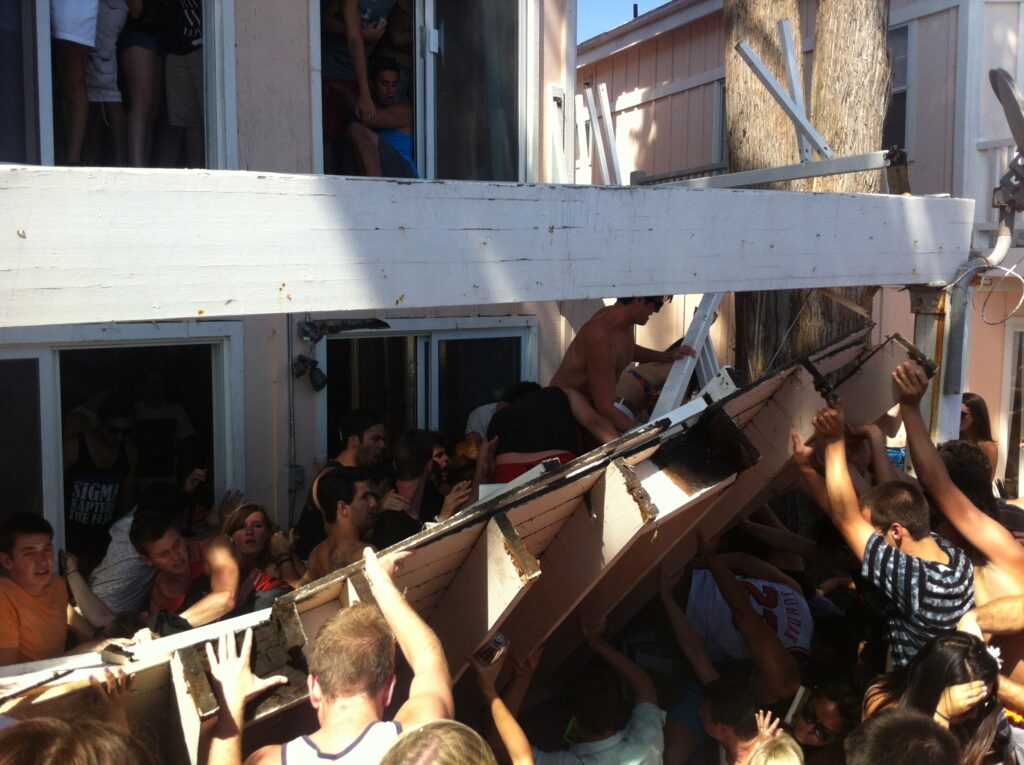 Approximately 10-25 people were attending a party at 6643 Del Playa during Deltopia 2013 when the balcony unexpectedly fell and injured several partygoers. Courtesy Robert Clayton

The incident occurred three years ago during Deltopia festival weekend on April 3, 2013. Approximately 20 partygoers were clustered on the balcony of 6643 Del Playa, then the senior house of the now-defunct Beta Theta Pi fraternity.

The 100-square-foot balcony suddenly collapsed midway through the day, and five people went to the hospital for medical attention. Four immediately sought legal counsel from attorney Robert Clayton, and another came forward shortly after.

Stephanie Grace filed the lawsuit against Ronald Wolfe & Associates, Inc. and the Elliott Family Trust on April 24, 2013, and the settlement was officially decided on Sept. 21, 2016.

Lucas Fitch, who incurred the largest medical expenses, paid $80,000 for nerve damage in his knee, a fractured foot and fractured leg. 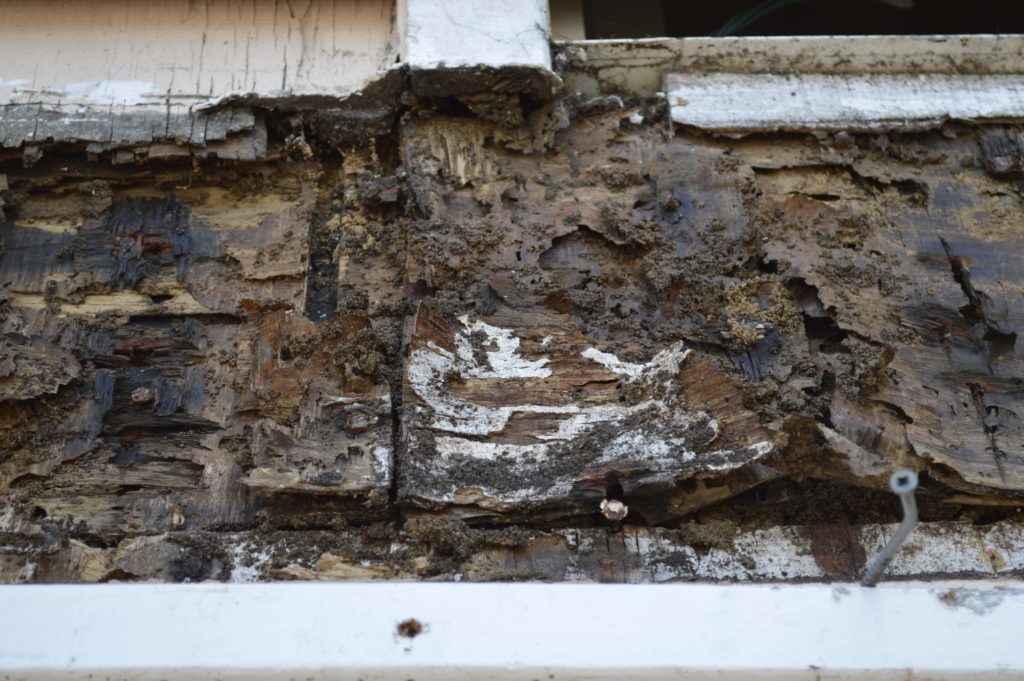 The settlement will be divided between the five victims based on the range of their expenses, but “each one of them has activities of daily living that they could do before where they are now limited,” Clayton said.

Beta Theta Pi was not in contact with Clayton or defense attorney Robert Freedman following the incident, and Clayton said the fraternity “immediately went into radio silence” to distance themselves from the accident.

“The evidence is pretty clear that it wasn’t their fault,” Clayton said.

Two of three engineers hired by the defense, however, believed the accident was a combination of how the balcony was constructed and the amount of people occupying the space. 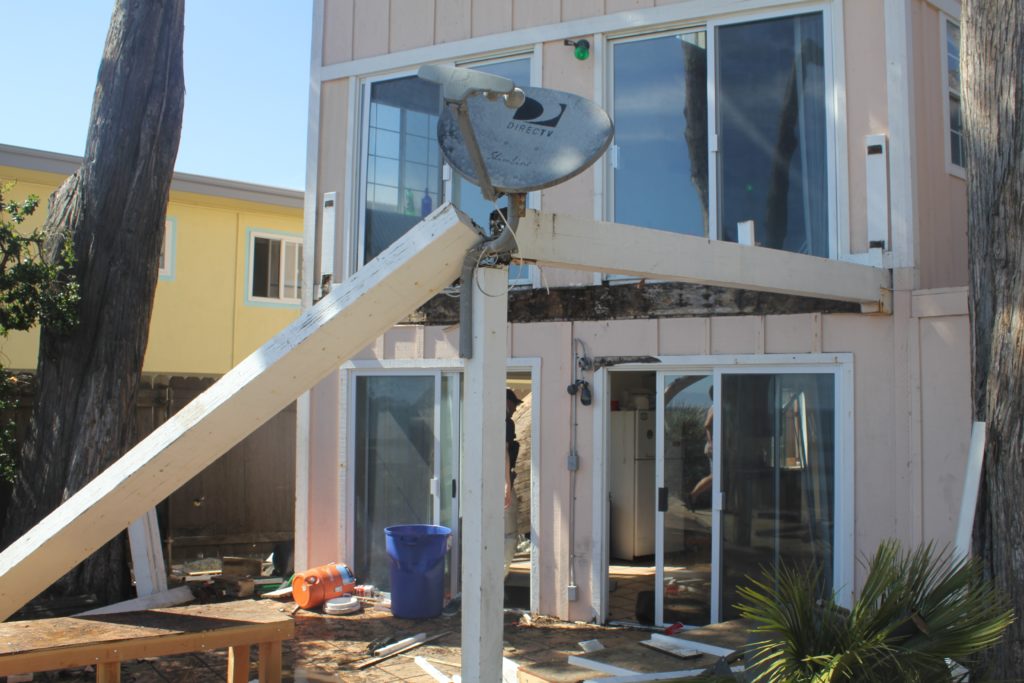 “I think the fraternity was concerned and wanted to keep their heads low and stay out of it as best as they could,” Freedman said.

Varying reports described 10-25 people on the deck at the time of the collapse. Although partygoers were consistently gathered on the small balcony, Clayton said it was not “packed,” and there was room to move freely.

The cause of the deck failure was disputed, and plaintiffs believed Wolfe & Associates neglected wood rot and serious termite infestations in the 25-year-old building, ultimately causing the balcony to fall.

“Every case is different,” Clayton said. “As the case went on, they knew they had problems.”

“Thankfully, nobody died in the collapse; that easily could have happened.”

A pest report from Western Exterminator Company on February 13, 2012, noted six areas affected by drywood termites throughout the deck, ceiling and balcony area and two instances of dry rot and fungus.

The report recommended that Wolfe & Associates fumigate the building and remodel the affected areas, but according to Clayton, the management company did not address the report or communicate the problems to its tenants.

Clayton said a neighbor had also advised Wolfe & Associates three to four years prior to the incident, telling the company to remodel after he went next door and “put a finger right through the wood.”

“There were a lot of reports regarding termites. Some were remediated, some were reviewed,” said Freedman, who believed termites were not the singular cause for the balcony collapse.

“At trial, we were prepared to present what we believed was the cause, which was the activity of the kids partying on the deck,” he said. “There were also prospective connections with the deck, where it was connected to the wall.”

The deck, boarded up after the incident, has since been replaced with a sturdier deck space. 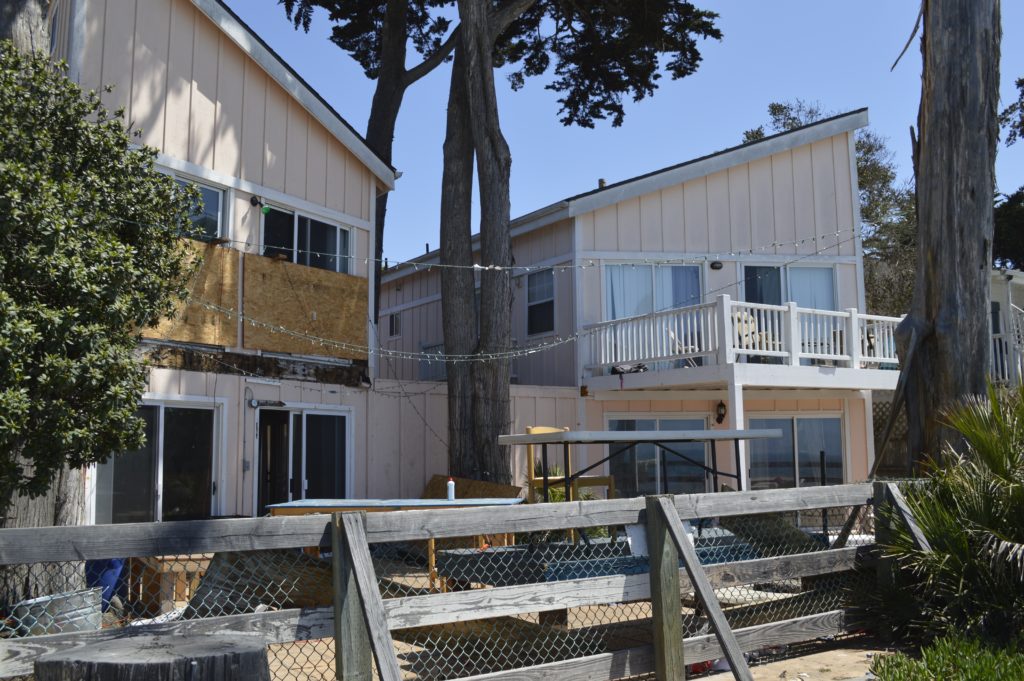 The balcony was boarded up and later replaced with a sturdier deck space. Courtesy Robert Clayton

Clayton said two other victims settled their cases separately through Wolfe & Associates’ insurance company. He did not know the extent of their injuries, but said the settlement likely amounted to less than $50,000. Wolfe and Associates paid $1.6 million of the settlement and a cross defendant in the case paid the remaining $50,000.

“For those type of injuries, this was a good settlement,” Clayton said. “Thankfully, nobody died in the collapse; that easily could have happened.”

Five students at UC Berkeley died after a balcony collapse in Berkeley, Calif. on June 26, 2015, and seven more were injured.  In response, Gov. Jerry Brown passed a bill in September that will require contractors to report past felonies and crimes involving construction defects to the Contractors State License Board, according to the Daily Californian.

Clayton added that “several others” who were injured in the Deltopia incident may not have made claims, but most victims suffered only from non-critical, orthopedic injuries.

“The judge was very fair,” Freedman said. “When you take into account their physical damage … and their medical bills, the settlement was reasonable.”

This was truly an unfortunate accident, and the victims deserve to be compensated for their injuries and suffering. However, the headline and story is mis-leading. This is poorly written and not fact checked… According to Noozhawk, “The Elliot Family Trust’s (the owners of the property) insurance company paid $1.5 million of the settlement, and Wolfe & Associates’ insurance company paid the other $100,000.” so to lead with ” Wolfe & Associates” in the headline and say “will receive $1.6 million from Wolfe & Associates” in the article is false and possibly defamatory. Sure, I get it, I.V. loves to hate… Read more »

Good post – you beat me to the punch. I was going to say the same thing- that an insurance company likely beared the brunt of the settlement, and given the generosity of California courts and juries, they would be crazy not to settle. We can take comfort in the fact that they will most definitely raise the premiums on the Elliot family trust. I took the same view in my day that companies like Ron Wolfe and Bartlien were basically evil, but I was a young naive student and didn’t realize how the world worked.

Wolfe and Bartlein are both scum.
Wolfe really should have been forced to pay more given their negligence. Business as usual…