The Daily Nexus
Sports
Gauchos In Search of First Win Against SMU
November 22, 2016 at 5:57 pm by Jorge Mercado

It’s been a tough start to the season for the UCSB men’s basketball team through the last three games this season, but the turnaround to try to make it successful could begin tonight as it faces off against Southern Methodist University in the second of its three-game road trip. 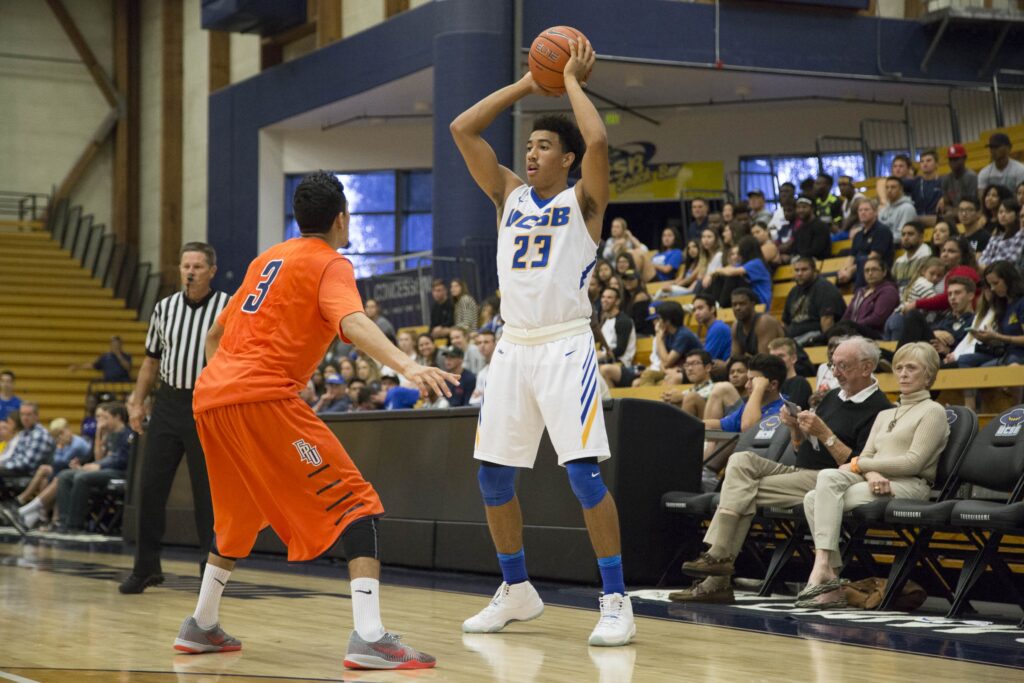 Looking for someone to pass to, Christian Terrell keeps the ball from the defense. Dustin Harris / Daily Nexus

Santa Barbara’s rough start is indicative through its 0-3 overall record this season, with losses against Nebraska-Omaha, University of San Francisco and, most recently, CSU Bakersfield. UCSB’s 0-3 record to begin the year is its worst start since the 2000-01 campaign when they started 0-4.

The Mustangs host the Gauchos boasting a 3-1 record including a 2-0 start at home with impressive wins over Gardner-Webb and Eastern Michigan. In both matches, SMU was playing in front of a sellout crowd over at Moody Coliseum.

Both teams have met only three times in each program’s respective history with each notching one victory over the other. SMU’s win was the most recent as it beat UCSB 80-73 in an overtime match on Dec. 8, 2014. With only 10 seconds left in that game, guard Gabe Vincent nailed a game-tying three to send the game into an extra period.

Vincent has played a big role in the Gauchos offense since his arrival in 2014. The former Big West Freshman of the Year has averaged a team-high of 16 points per game to start the season including a 23-point effort in a loss to USF.

Senior point guard Eric Childress will also need to be a key factor if the Gauchos hope to notch the first win of the season against a very tough opponent. Childress is coming off a career-high 14-point outing against CSU Bakersfield and leads the team in assists with four per game.

Ultimately, the biggest key for Santa Barbara will be taking care of the ball. Against the Roadrunners, the Gauchos turned the ball over a season-high 21 times, negating the fact that they outshot their opponents and outrebounded them.

Another key will be to keep the energy high through both halves of the match. This year, Santa Barbara has been outscored 102-100 in the first half but 124-93 in the final half of games.

Knowing this, SMU will surely try to take advantage with their high-octane offense. In the second half of games this season, Southern Methodist has outscored its opponents 164-114, meaning the Gauchos will definitely need to be on high alert or the game could turn into a blowout.

As a team, the Mustangs average 73.2 points per game and are shooting an impressive 45 percent from the field and 36 percent from beyond the arc.

Sophomore Guard Shake Milton has played a big role in the SMU offense averaging 12 points per game and shooting a solid 43 percent from the field. The Oklahoma native was one of 20 candidates named to the 2017 Jerry West Shooting Guard of the Year Award watch list.

Junior forward Semi Ojeleye will also be another player the Gauchos must be weary of. The forward was named American Athletic Conference Player of the Week for Nov. 14 after averaging 22 points and 11 rebounds in both games that week. Ojeleye leads the team in points per game with 20.3 and shoots a team-high 48 percent from the field.

Defeating SMU will not be an easy task but a necessary one if Santa Barbara wants to get its season on track. A big road victory would be something that could definitely boost the confidence of all the Gauchos, especially the young ones who are dealing with this type of adversity for the first times in their careers.