UCSB professors, advisors and faculty held a discussion Wednesday in response to the A.S Senate’s approval of $5,000 in funding for College Republicans’ event 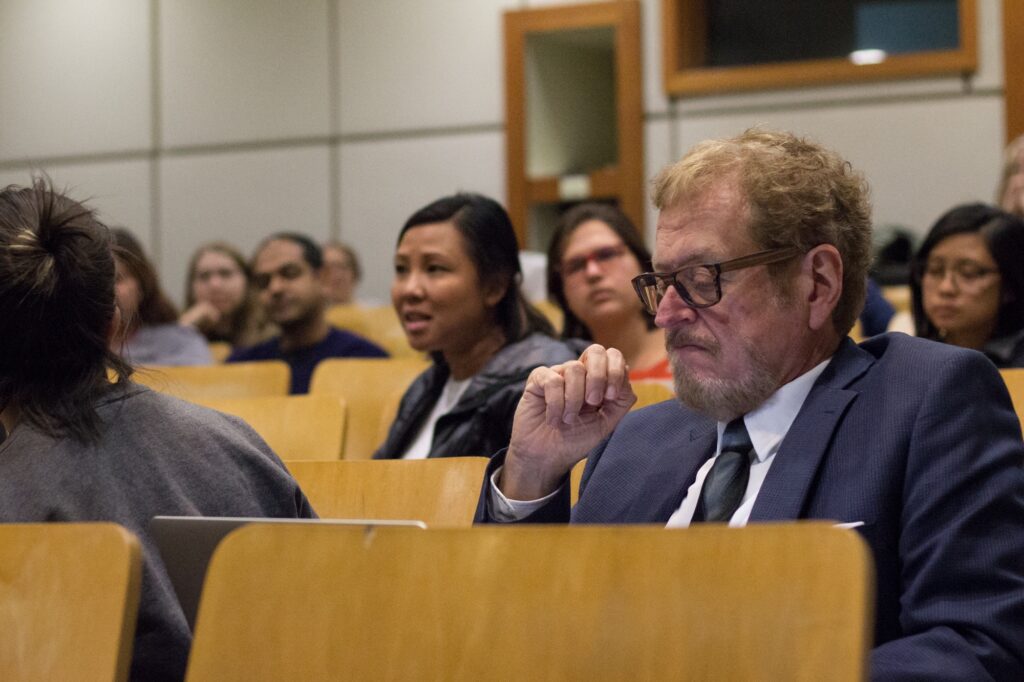 After the Associated Students granted $5,000 to the College Republicans in early November to host Ben Shapiro, hundreds of students mobilized against the controversial event.

Faculty have begun contributing their efforts in the past week, adding often unheard opinions to a conversation about free speech, safety and whether Shapiro’s event will promote hateful rhetoric and violence.

“Sometimes, we’re making sure we’re not giving up a right that we’re gonna want back later,” Klawunn said, discussing the consequences of stifling speech if the administration were to prevent Ben Shapiro from speaking at UCSB.

The conversation was heavily in favor of the minority students and allies who gathered at an A.S. Senate meeting two weeks ago to oppose the College Republicans event.

Professors suggested creating a list of “sanctuary” faculty members who are available to support students who are distressed. The idea is modeled after the “sanctuary campus,” a symbolic designation with special powers.

Sanctuary campuses can protect students from deportation, certain federal immigration laws and other threats, similar to sanctuary cities. The movement has emerged at Tufts, Rutgers, Yale, Stanford and several other universities after Donald Trump was elected U.S. president, followed by multiple protests throughout the country.

At an A.S. Senate meeting Tuesday, A.S. Executive Director Marisela Marquez presented an alternative for students who didn’t wish to contribute to the College Republicans event.

The Compulsory Fee Refund Application allows students to withdraw their portion of student funding from specific programs and is a product of a 1993 California Supreme Court Decision: Smith v. Regents.

The court ruled in 1993 that the UC cannot force students to pay for events that pursue political or ideological goals through “compulsion and coercion.”

“This specific ruling was obviously brought up at this specific meeting because one of the administrators who has a lot of ties with a lot of these left-leaning organizations,” Andrew Gates, College Republicans president, told the Nexus during the Senate meeting Wednesday, adding that the ruling could work against “left-leaning” events.

“We have, what, one event per quarter? But if you divide 5,000 by 23,000 students … compare that with the countless left-leaning events that you know all the conservative students could, like, get a refund for,” he said.

At the faculty meeting one hour prior, Sanchez quoted comments from the College Republican’s YouTube video of the Nov. 3 Senate meeting. The comments can only be removed by the owner of the account, or YouTube if the comments are reported.

“Dis what fatherless iq 85 african americans been taught by iq 130 jews who think whites nazist. ethnic weapons,” read another comment on a repost of the video, which College Republicans cannot regulate. Ladijah Corder, co-chair of UCSB Black Student Union, later recited the same comment to the Senate during public forum.

Tamara Afifi, professor of communication, said while advocacy may interrupt scholarly work, it is the responsibility of non-minorities to support activists. “It’s up to us,” she said.

“I think a lot of white people are scared to say something stupid; they’re scared to be vulnerable,” she said. “It’s not up to people of color to educate them, they have enough placed on them.”

Armistead, who has been a vocal advocate of students who are against the College Republicans program, said “We need to take our campus back.”

“I’m upset, too,” Armistead said. “It kills me because I’m the one who ultimately has to make this event successful.”

Other faculty members built a suggestion list, including attending the event en masse to occupy seats and arguing with Ben Shapiro point by point during his lecture.

“The point of these events is expressing joy and love for one another,” he said. “If you see hatred, you should show it a smile because hatred is going on.”

The conversation culminated with an initial push to create buttons for faculty to wear during the event. The buttons would be emblems of inclusivity, saying “UCSB Against Hate.”

A version of this story appeared on p.1 of the Thursday, Nov. 17, 2016 print edition of the Daily Nexus.

Why is the Daily Nexus spreading lies? These comments are inaccurate. Piss poor “journalism”

Care to explain how the content of this article expresses lies? Or perhaps you’d like to join the Nexus yourself, if you think you can do better.

I haven’t been able to find any of these comments on the video?????

They had to shut down comments on the video. Shows they know they F’d up.

What’s funny is this article ignoring the overwhelming number of comments simply calling them fascists and poking fun at their ridiculous arguments. Instead, they pick out one of 70+ comments that are suggestive of trolling, and make up another one entirely. It’s more beneficial if they make the campus conservatives look bad, because that’s the campus minority, ideologically. Also, the pretenses that college Republicans has some sort of responsibility to shut down and block comments as they come in is preposterous. The internet public forum is in no way indicative of actual public discourse, as anonymity allows for rapid spread… Read more »

The selective tailoring of the truth to buttress a particular worldview is anti-reality. The Daily Nexus needs to hold itself to a higher standard.

When young people ask questions and challenge social norms, they should be cherished and encouraged by those in authority. They do not deserve to be demonized by the highest levels of UCSB school administration. How are students at UCSB supposed to learn to be critical thinkers, when the Vice Chancellor of Student Affairs and Dean of Student Life organize forty of their colleagues to come together and badmouth a pesky student group? How is this supposed to create a positive environment for free thought and free dialogue? How is this supposed to make students with unpopular opinions feel more self-assured… Read more »

What are the details of the assault against you, that you refer to?

At the AS Senate meeting two weeks ago, Katya Armistead grabbed my phone to attempt to stop me from filming the pubic meeting. She stopped when someone else turned their camera around and began to videotape her from another angle.

Grabbing your phone is assault? LOL

Why are you still on campus?

I’m not. I came back to visit my friends for a few days and when this issue came up I decided to stay an extra day and go support them at the meeting. And maybe you should be asking that to Jonathan Abboud! I’ve been meddling in campus politics for a few months after graduation. He’s been here for two and a half years with no endpoint in sight.

It was eerily similar to what Melissa Click did at Mizzou to a student reporter filming the Concerned Student 1950 protests a year ago.

I also didn’t care for Katya’s comment about “taking our campus back.” The campus belongs to everyone and the wonderful thing about universities is the diversity of opinion. We don’t want to be “safe” from that. I also, though, wish we were not at a time where the alt right politically incorrect language has become cool. Ben Shapiro coming to campus though actually sounds incredibly intellectually stimulating given what has happened with our presidential election. I advise the people who oppose him to stay calm and listen, not let themselves get triggered. He might have some good things to say… Read more »

Katya’s comment about “taking our campus back” was in reference to the provocation Black students and students of color have felt with the threat of this event happening looming over their heads for the last month. She stated that we need to “take our campus back” from those who are intentionally trying to scare us and provoke us into feeling angry and insignificant by holding this event, not to take our campus back from having a diversity of opinion.

I was at this meeting where she made this comment.

“Professors suggested creating a list of “sanctuary” faculty members who are available to support students who are distressed.” Good grief! If this is considered necessary, then the folk in need are not ready for the “privilege” of free speech. And the idea that faculty and students should occupy the seats near the speaker and “argue him down” so he cannot make his points is sadly reminiscent of how Yale (circa 1971) treated Alex Shockley (sp?), a Nobel prize winning scientist who wanted to discuss the “merits” of voluntary sterilization (accompanied by financial incentives) for folk scoring below a certain level… Read more »

This is really surprising to see academics struggling over someone who holds a different political viewpoint. Ben Shapiro will probably be an especially interesting speaker because he used to work for Breitbart News, knows and doesn’t like Bannon who was appointed to be Trump’s adviser. I have heard Shapiro doesn’t like the Black Lives Matter cause. So what? It’s a great cause anyway, speaking up against police shootings.

The UCSB faculty are worse than the students. No way would I send my kids to this Orwellian anthill of enforced group-think.

Brilliant job of inferential over-reach. For less educated folk (like Jazz) — i.e., generalizing the whole based on a small sample thereof.

If your kids are anything like you in the “smarts” department you need not worry, –they won’t gain entry to a UC anyway.

UCSB put a bigoted totalitarian like Katya Armistead in charge of student affairs. That is something only an uber-smart person like yourself would do, no-name person.

What the F*k are you blathering on about? I don’t know Armistead and have no idea who put her in charge of what.

You did get one thing correct, however — I am indeed “uber-smart”. Coming from you I suppose we should attribute your on-point attribution to chance.

BTW: thanks for the response. It is semi-amusing to see non sequitur thought up close.

Bottom line: If you want to be an idiot, be my guest. But, one free piece of advice — keep clear of your keyboard.

Wow. You could watch the video of her grabbing Jason Garshfield’s camera, or you could read the article. How embarrassing your lack of intelligence must be for you. I don’t blame you for staying anonymous.

I said I don’t know her (note to twit — note knowing personally is not equivalent to not knowing impersonally), not that I did not know who the name referred to. You are a real work (of major idiocy).

As for anonymity. Am I to take it that Jazz King is your actual name! Sorry for your unwarranted treatment at the hands of malignant parents.

Is thinking your second language? If so, perhaps that helps explain your public display of stupidity. Really, the Nexus needs a moron filter.

Keep your little bundle of sh*t at home then, your loss.

Can’t wait to see Ben Shapiro! I may not agree with all of his views, but we need to be able to hear them, engage with them, and decide for ourselves.

…Protect the precious snowflakes from words… at all costs…

While I agree with your general sentiment, try to act your age and not your IQ.

Hopefully all the brave, intelekshual, overpaid UCSB faculty will wear their little badges, sit on the front row and dazzle us with their intellect by challenging the Great Ben Shapiro to a battle of wits. I will run the popcorn concession.

Why is the UCSB staff comprised of anti-semitic fascists?