The Daily Nexus
Water Polo
A Refreshing Change of Scenery: UCSB’s Conference Turnaround
November 17, 2016 at 5:10 am by Jorge Mercado 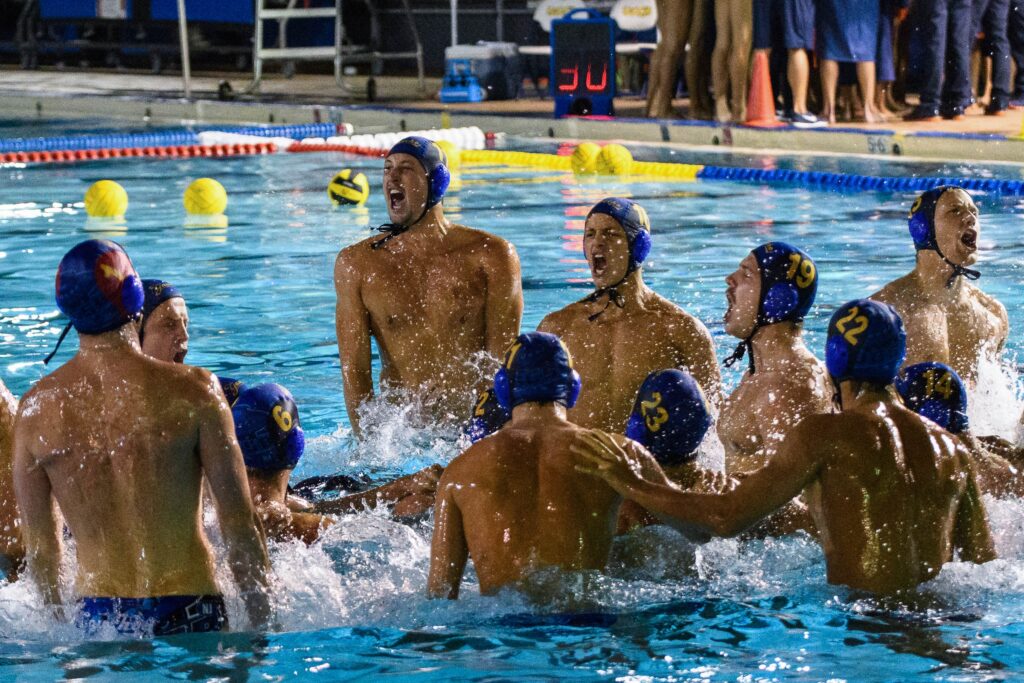 The Gauchos get pumped for the game. Eric Swenson / Daily Nexus

Sometimes in life, it is okay to pivot from the status quo. It is okay to move on to something you think will improve your life because, at the end of the day, all anyone really wants is to be happy.

This does not only apply to singular people but also to cities, families and even sports teams. Such is the case for the UC Santa Barbara men’s water polo program who, after 24 years in the Mountain Pacific Sports Federation (MPSF), made the decision to transition over to a new conference: the Golden Coast Conference (GCC).

UCSB’s decision to move was influenced by many different factors, but one of the biggest was the lack of winning in the conference that was made up of the four perennial powerhouses of NCAA water polo: UCLA, USC, Cal and Stanford.

Throughout that same time span, the four big teams won every single conference tournament, with USC winning the most at nine MPSF titles and UCLA, Cal and Stanford each winning five apiece.

Most notably, an MPSF water polo team has won the national title since the inception of the conference in 1992.

In the 24 years the Gauchos spent in the MPSF, they never once enjoyed the luxury of taking home a conference tournament or an NCAA title.

Only one team was not a part of the big four, as Pepperdine won the NCAA championship back during the 1997-98 campaign. In the other 23 years, USC again has had the most titles with nine after winning six straight titles from 2008-2013. UCLA has the second most with seven, Stanford has five and Cal wraps it up with three.

With those four squads constantly dominating a water polo conference that held as many as 10 teams a year, it was hard for the Gauchos to embrace being in the middle of the pack time and time again.

“We always try hard no matter what league we were in,” junior attacker Shane Hauschild said. “But it was a bit deflating not being able to go to the NCAAs just because you couldn’t beat the top two teams [in the country].”

The frequent finish in the middle of the conference undoubtedly had a discouraging effect after gradually achieving upsets over some of the nation’s top teams each season. To feel like the peak of the season could be to earn a No. 4 seed in the conference tournament, then losing to the No. 1 ranked team in the country after just upsetting the No. 2 seed was demoralizing.

During many years in the MPSF, teams like Santa Barbara had great seasons that ended all too soon because of one loss. UCSB has had the talent in years to defeat teams like UCLA, which it did back in 2012 during the Southern California Tournament. Before winning against the Bruins, the Gauchos also defeated the Cardinal before ultimately falling to USC in the championship.

Nonetheless, that result alone highlights the issue at hand. At that time, UCSB was ranked No. 6 and defeated No. 3 Stanford, then No. 2 UCLA and was expected to beat No. 1 USC all within 24 hours.

The reality of the matchups were nearly implausible considering that those three aforementioned teams garnered players from other countries that already had Olympic experience on their rosters.

In comparison to other sports, specifically the current college football season, No. 1 Alabama opened the season against No. 20 USC, which it routed. But the week after they weren’t expected to compete against another top-20 team, let alone a top-five opponent.

It is deflating to think that the only way UCSB and other schools like Pacific, LBSU, UCI and other middle-of-the-pack teams of the MPSF could make the NCAA tournament is by having to knock off the top three teams in the country first. This is something that isn’t expected in most other collegiate sports, unless it’s in the actual NCAA Tournament, and even then it’s not always the case. 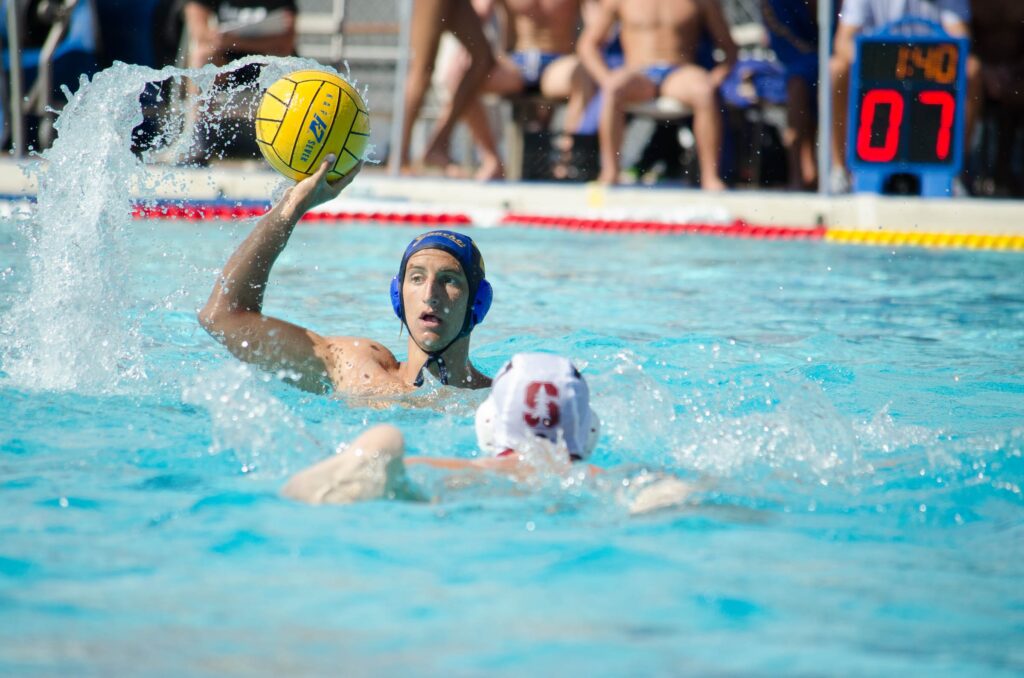 That is why, after 24 years, Santa Barbara men’s water polo and Head Coach Wolf Wigo decided to make the jump and move on to a new conference, one more suitable and one that could give teams such as itself what they desired: a chance to make a run at the NCAA championship.

The GCC had already established women’s water polo, which UCSB also is a member of dating back to 2013. When the circumstance emerged that many teams were looking for a new home for men’s water polo, the GCC jumped in.

Moving on, just like UCSB, are Pacific, Long Beach State, UC Irvine, Pepperdine and San Jose State. Each program’s departure left only the big four schools in the MPSF, leading to the conference being in a temporarily troubled state.

“We lost six of our 10 teams after they were forming a new league in an effort to find an easier path to the NCAA Tournament,” MPSF Commissioner Al Beaird said. “That did put us in a difficult bind since the NCAA requires six teams to have an automatic bid into the championship.”

In order to help soften the blow, the MPSF announced on June 30 that it was able to find one more team to join the elite four and granted membership to Penn State University Behrend. Getting the fifth team, the MPSF was granted a grace period to retain an automatic qualifier for this year; however, they still will most likely lose that bid come next season.

“Even if we can get six teams next year, we probably will not be able to qualify for an automatic [bid] because those six teams have to play together for a total of two years,” Beaird said. “We will have to earn our way into the tournament with at-large berths which isn’t the ideal situation, but the quality of the MPSF teams is still strong.”

On the other side, despite not being able to get an automatic qualifier for the first year, UCSB was happy to be in a conference that feels more evenly matched than stacked against them.

Earning immediate results, UCSB went out and proved itself in its first year.

In the inaugural GCC season, the Gauchos ran away with the regular season conference title going a perfect 5-0 after defeating Pacific, LBSU, UCI, Pepperdine and San Jose State.

The perfect GCC finish was UCSB’s first undefeated conference season since 1979, which coincidentally was the last time Santa Barbara won their first and only Division I NCAA title. Now, the Gauchos hold the No. 1 seed heading into the conference tournament, something they never experienced when they were in the MPSF.

The newfound confidence in this Gaucho team is evident. They closed out the season winning their final seven games and 10 of the last 11. Influencing the successful finish was not having to face the challenge of playing the top-four nationally ranked talent every single game.

“Having a legitimate shot of winning the conference, even if you’re a low seed, and getting a shot at the NCAA is huge,” Wigo said. “Any team in the GCC can beat a Pac-12 team, but they can’t typically win three games in a row against them, and starting next year, you win one game and suddenly you’re in the National Championship where anything can happen.”

And even when they did face top talent this season, UCSB did well. Despite not beating UCLA or Cal, the Gauchos played each game pretty close. Not only that, it did knock off Stanford earlier this year to reach the No. 4 spot in the national rankings, its highest spot since 1990.

Even though it’s still early and hasn’t been a full calendar year yet, it’s pretty safe to say that the Gauchos made the right decision in making the move out of the MPSF. It was not done out of spite or hate but instead out of what was truly better for UCSB’s program going forward.

“It wasn’t in their best interest for us to leave, but it was in all our best interests, and I think it’s in the best interest of the sport,” Wigo said. “They were a little upset at first, but anyone not in the MPSF would recognize it was a good move.”

Even though most coaches declined to be interviewed for this piece — most of them due to the fact they were getting ready for the MPSF Tournament this week — it is clear there is still a respect among all the coaches, especially due to the fact they still all scheduled to play each other.

“We do some joint scheduling and ensured that coaches from both conferences and commissioners like myself maintain those relationships, because having that competition is important to both conferences.” Beaird said.

Overall, although the move did hurt the MPSF a bit, it is clear that this was the right thing for the Gauchos to do. The confidence that has peaked in this team — as it knows that it can win its conference year in and year out — is apparent especially in seniors who have experienced UCSB’s past before its present state.

“It’s great that we now have that confidence of going undefeated during season,” senior attacker Mitchell Hamilton said. “And it really helps drive us to win those last two games [conference tournament] and win our division.”

It is underwhelming to stay in the same middle of the pack each year, never feeling like you are living up to the true potential that lives inside you as it does in every person, every family and every team.

Like UCSB proved, moving forward and pivoting from that same old structure could make the difference by you not only living up to your potential, but also finding that confidence to be as happy as you can.