The Daily Nexus
News
A Peek Through Professors’ Office Doors
November 17, 2016 at 5:00 am by Rebekah Akiyoshi

Five UCSB professors discuss their work spaces and the meanings behind the items inside; from Darth Vader to a red, wooden phallus, the eclectic stylings reflect the unique professors that display them 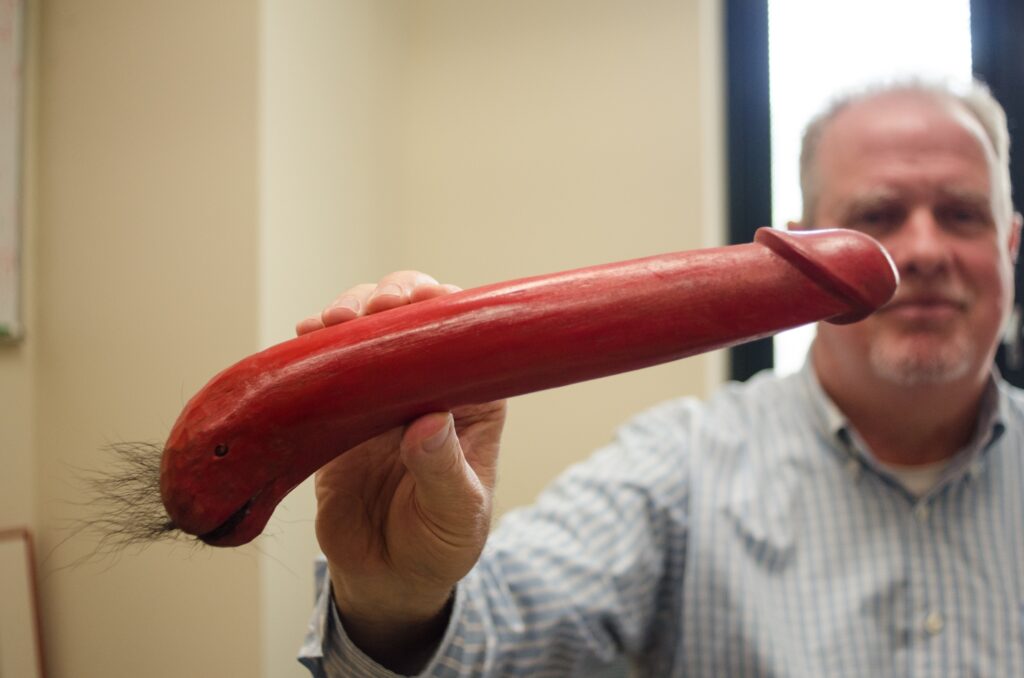 The story behind the phallus begins in Bhutan, a small country located between India and China, which was greatly influenced by Tibetan Buddhism. Early in Bhutan’s history, it was believed a mad yogi named Drukpa Kunley traveled from Tibet and drew crowds with his crazy antics.

His greatest skill was seducing female demons with his charisma and “defeating” them with his phallus.

To this day, the people of Bhutan still celebrate Drukpa’s genitals. Hillis has taken several trips to Bhutan.

“There are pictures of his penis everywhere,” he said. “Then you will see [phalluses] just hanging in people’s homes and temples to ward off demons.”

He bought his phallus from a local shop in Bhutan. Hillis has used it as a prop in his Tibetan religion and intro to religion classes. 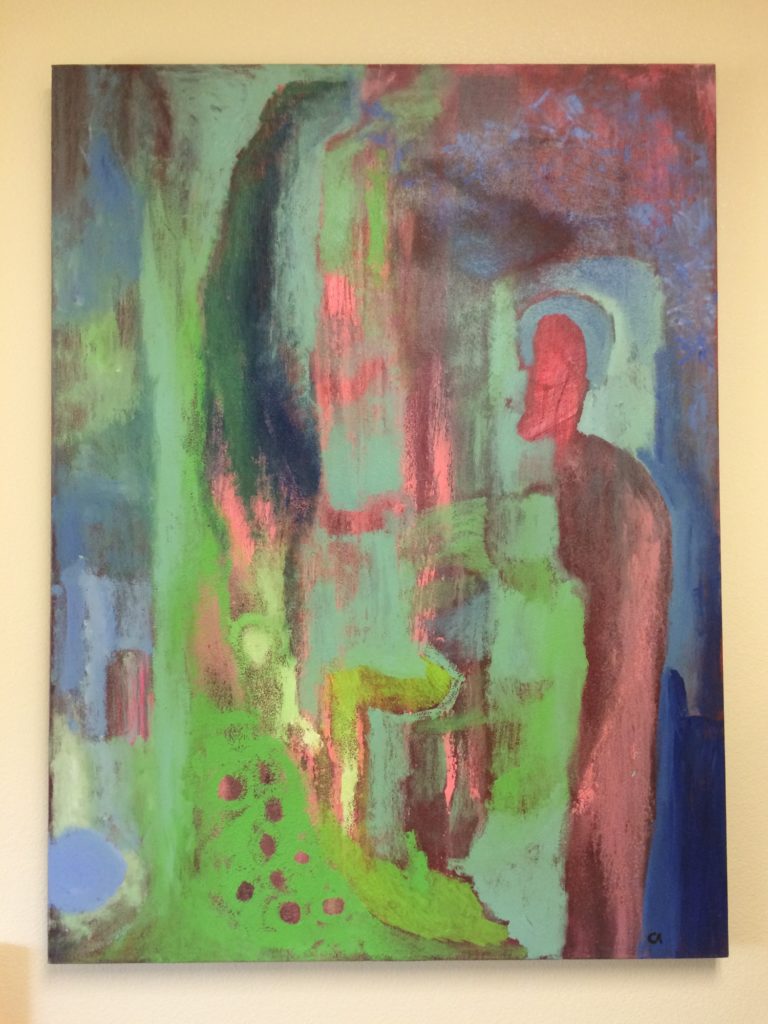 Waid is a professor of the English and comparative literature department with 18 years of teaching at UCSB on her resume. Also notable, she is the author of The Signifying Eye: Seeing Faulkner’s Art, an in-depth study of William Faulkner’s abstract art.

These paintings and drawings were all given to her as gifts from former students, some who went on to become painters. Asked why students give her art, she said, “they know I care about color, and I’m all about paintings.” Some of the titles of the paintings in her office include “Alien Corn,” “Oklahoma Alabama” and “Guadalupe.”

A still-life above Waid’s computer is credited as the work of a past first-year student, Natalie O’Brien. She credits O’Brien for founding The Catalyst, a magazine of poems, stories and art submitted by UCSB students.

Together, they worked on the “digital fires of the Internet” to study ekphrasis, art expressing another form of art, like a poem talking about a painting.

“These paintings bring joy to me. Just to see the sunlight coming in and reflecting off the Pacific onto the paintings makes me happy to work and be with people,” Waid said. 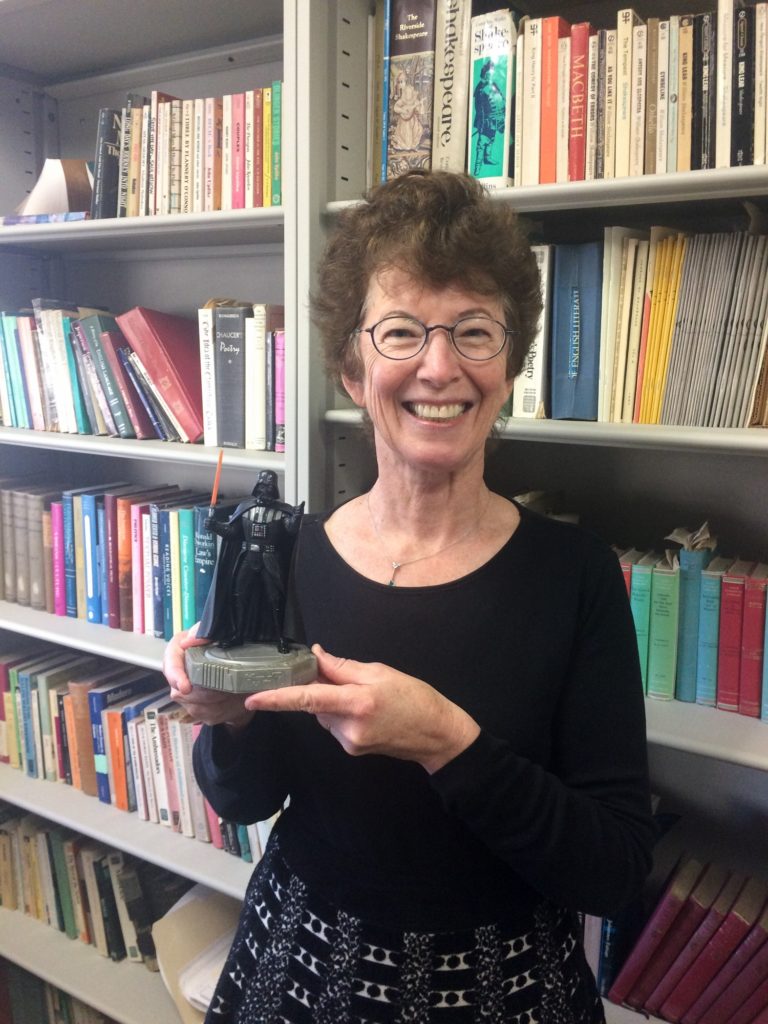 Fumerton’s Special Force
As a professor of English at UCSB for over 30 years, Patricia Fumerton understands how to connect with students in a very personal way. At the end of her classes, she receives many little gifts from students who appreciate her teachings.

One of her prized possessions stands on her windowsill, serving as a constant reminder of her favorite reason for teaching. Given to her by a former student back in 1990, a Darth Vader action figure with a swivel base and standing at eight inches tall strikes fear in all who enter her office.

The movie series “Star Wars” serves as her teaching metaphor to the classic epic story, Beowulf. The hero of the story, Beowulf, takes on the dark monster, Grendel.

“Beowulf is taking on the dark side … you have to take on the opposing forces of evil … often take the form of a relative,” she said.

Fumerton uses this comparison in her classes because “as students hear it, they connect very quickly.” She loves to connect bigger concepts like good versus evil back to students’ lives.

“I treasure these plastic gifts, because they mean the student gets it, and it means enough to them that they want to give me a memento … it’s my connection to the students,” Fumerton said. “Whenever I look at him, I remember how fun it was teaching Beowulf.” 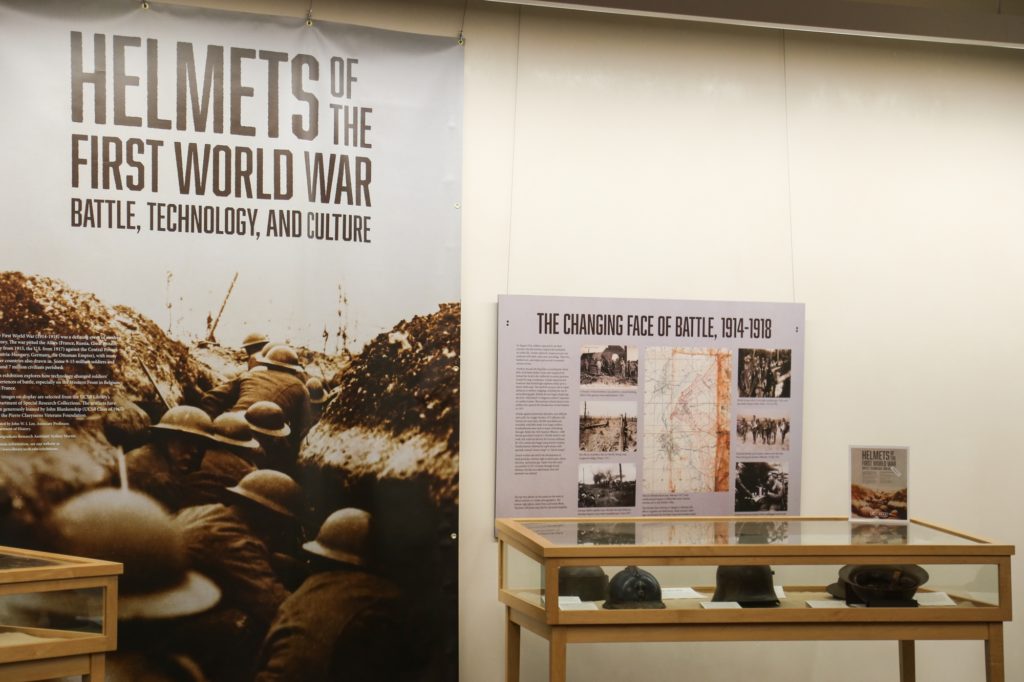 Remembering WWI with John W.I. Lee
John W.I. Lee is an associate professor at UCSB and has worked here for the past 16 years. He is currently on leave writing his book and taking care of his new baby, born this past summer. In his office, Lee displays an array of 10 helmets from World War I.

These helmets are a timeline of steel integration. Before the war, people had romantic ideas of war and wore decorative caps that did not protect their heads. As trench warfare increased, so did reported head injuries.

Lee highlights a specific helmet called the French Adrian, which was the first mass-produced steel helmet in Europe.

“We are living in a world shaped by the outcome of WWI,” said Lee, who studies changing warfare throughout history.

For the past year, Lee has been working on a project to commemorate the 100th anniversary of WWI. He invited first-year student Sydney Martin to help with extensive research and report write-ups. The project will be an exhibition to display the helmets for UCSB students to view firsthand.

“There is nothing better to educate others than having them see it up front and personal,” Lee said.

Lee is borrowing these helmets from a local collector in Santa Barbara, who is interested in history and student learning. For those interested in learning more about WWI, this exhibition will be on display on the first floor of the UCSB library in November. 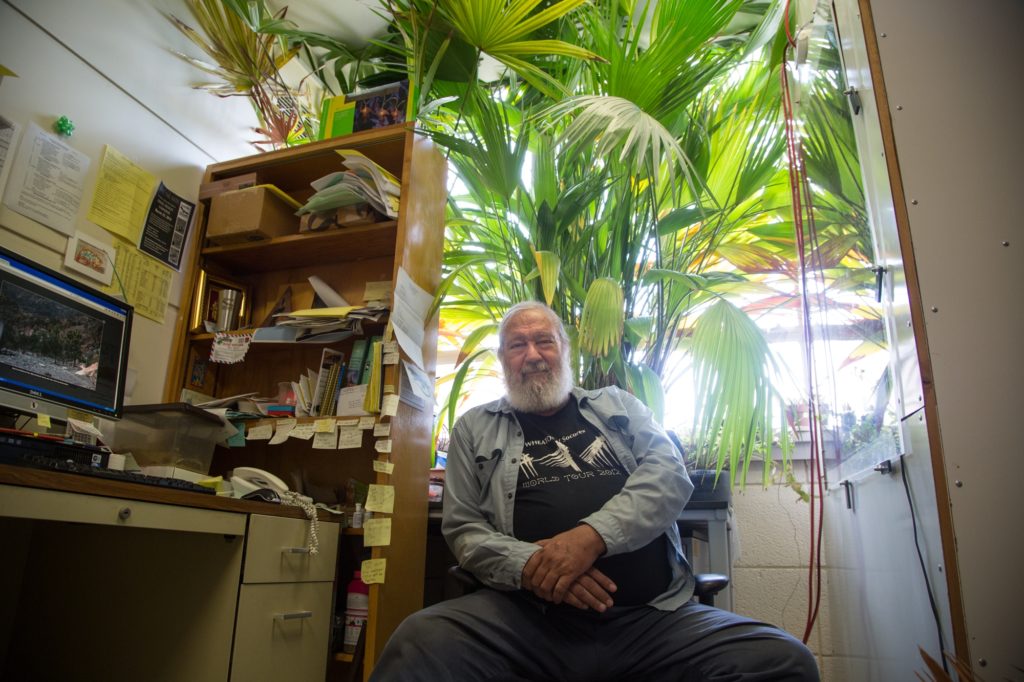 Samuel Sweet’s Botanical Indoor Garden
Samuel Sweet is a professor of ecology and evolution who knows a few things about keeping plants alive. On the far side of his office sit two pots of around 20 fan palms, all standing over six feet tall. The backstory for these palms’ installment begins on a somber note.

About a year and a half ago, a row of eucalyptus trees stood outside of Sweet’s office. These trees were about 150 years old and over 150 feet tall.

“Idiots cut [the row] down so they could park a few construction trucks while building the new bioengineering building,” Sweet said.

Without the trees, sunlight caused hot temperatures in his office during the afternoon. The construction company offered to paint over the office’s windows, but Sweet olitely declined the offer. Now, the palms serve an important purpose for the office of this professor: to keep the sun out.

A version of this story appeared on p.4 of the Thursday, Nov. 17, 2016 print edition of the Daily Nexus.