The Daily Nexus
Sports
UCSB Aims to Capture First Win of the Season
November 16, 2016 at 11:08 am by Quinn Moslander 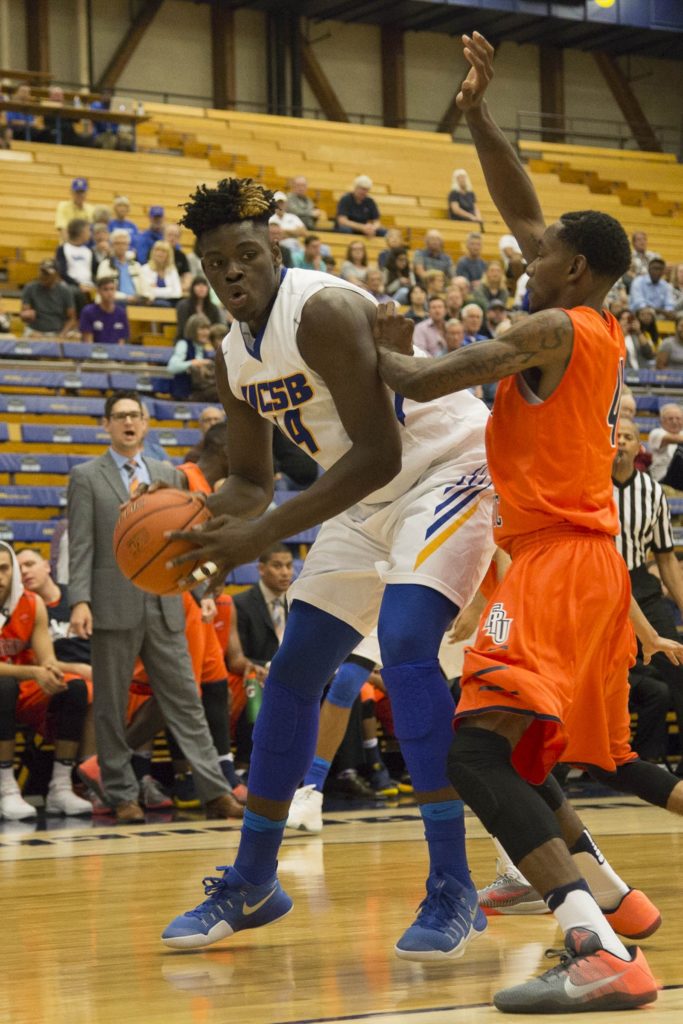 Following a tough loss on Saturday, the UCSB men’s basketball team heads back to the court Wednesday night for their second home game against the University of San Francisco.

With an official record of 0-1, the Gauchos have had the first part of the week to regroup, look at what can be improved and get ready for the next game.

Last season, the Gauchos faced the Dons in San Francisco, coming out on top with a 68-61 win. Junior guard Gabe Vincent led in UCSB points that game, scoring 18 in his 37 minutes of play.

Vincent has been a constant source of leadership for the Gaucho team along with senior Eric Childress, each scoring 12 and 10 points, respectively, in the Omaha-Nebraska game. These two guards make plays and take shots, pushing along the speed of play.

Childress played hard all 34 minutes that he was on the court, coming away with four defensive rebounds as well as four assists. Despite Santa Barbara accounting for 18 total turnovers in their opener, Childress was a bright spot only turning the ball over twice.

An up-and-coming power player for the Gauchos is redshirt sophomore forward Ami Lakoju. Having only made it into 15 games last season, he scored 12 points in his 16 minutes of playing time on Saturday. In addition to an offensive rebound, he managed to grab five defensive boards as well.

Lakoju first gave the UCSB fans a glimpse of his abilities in an exhibition game against Fresno Pacific where he made three baskets in under one minute. His speed and power this year has been balanced nicely by counterpart junior transfer forward Jalen Canty, who shot 2-4 with five points against the Mavericks.

His speed and power this year has been balanced nicely by counterpart junior transfer forward Jalen Canty, who shot 2-4 with five points against the Mavericks. In their exhibiton, Canty went off for 17 points, a performance the Gauchos hope they can get in this match-up.

Canty, a distinguished player from the City College of San Francisco, has maintained his position as a starter and managed to rebound four balls, block two and grab five points in his 22 minutes against the Mavs. His size and energy on the court have already made a difference for the Gauchos.

Despite losing key players Devin Watson and Tim Derksen — two Dons that played really well against UCSB — USF is coming in hot after having closely won their first game against Illinois-Chicago 82-80.

One returning player, sophomore guard Mladen Djordjevic, scored eight against the Gauchos last year. Having worked his way to a starting position this season, the former Serbian U-20 Men’s National Team player scored nine against the Flames along with four assists and four steals.

Two returning starters, forwards Nate Renfro and Chase Foster, stand to step up into bigger leadership roles this year. Last season they only scored a combined three points against the Gauchos. Now that their top dogs are gone, it is their chance to show the team just what kind of players they are.

As a freshman last year, Renfro shot 51.2 percent and had 19 blocks on the year, proving his capability as a starter. Against Illinois-Chicago, he scored 12 points over 27 minutes along with three assists.

Foster came away with eight points, shooting 4-9 against the Flames. During the 2015-16 season, the Colorado native made 27 three-pointers and played in all 30 games.

Senior Ronnie Boyce shone brightly as a leader against the Illinois-Chicago, scoring 28 points in 26 minutes of playing time, 13 points more than any other player on the court. Boyce, a guard originally from Oklahoma, will definitely be a player to watch.

Transferring to USF as a junior in 2015, he earned his position as third-leading scorer on the team, including a career-high 25 point performance away with a career high of 25 points, a personal record he has already beat in just the first game of the 2016-17 season.

In last year’s UCSB-USF game, Boyce played only two minutes. Judging by his performance last week, the Gauchos will most likely be seeing plenty of him.

The last time these two teams faced-off, UCSB may have won, but the Dons fought it to the end, scoring six points in the last minute of the game.

Having just lost at home, the Gauchos will be looking to turn around that 0-1 record at the Thunderdome on Wednesday, Nov. 16 at 7 p.m.