In 1979, the UCSB men’s water polo team enjoyed the success of a perfect conference record. Now, 37 years later, the No. 4 Gauchos can relish the same accomplishment after defeating Pepperdine at home 10-8 to finish unbeaten in its first season in the Golden Coast Conference.

“It’s great, hard-fought and a lot of tension,” said Head Coach Wolf Wigo. “Thought we were going to pull away a couple times, but they kept fighting back. No. 9 [Marko Asic] was great.”

With the victory on senior night, Santa Barbara finishes the regular season with an 18-6 overall record and a perfect 5-0 conference record, winning its final seven games and securing its No. 1 seed for the inaugural GCC tournament set to begin this Friday. 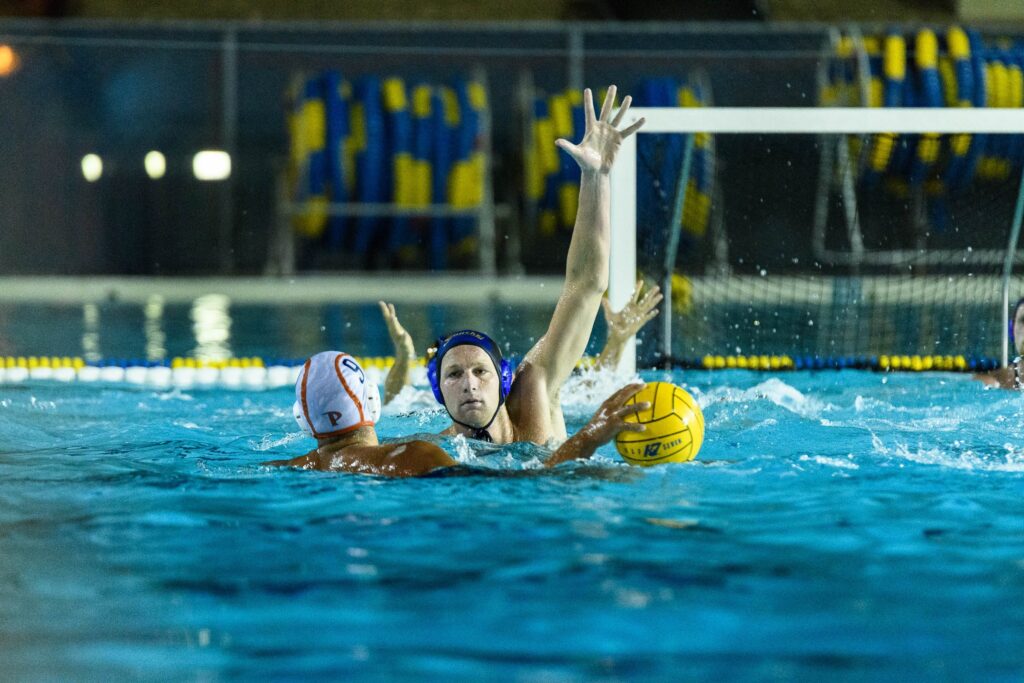 Pepperdine finishes out the year with an even 12-12 record, 2-3 record in conference play — setting them up to be the No. 4 seed in the tournament — and will face off against No. 5 Irvine for a chance to continue moving on in the tournament.

Early on, the match seemed to be going as expected on paper: Santa Barbara was running away with it. However, thanks to a hearty performance from sophomore Marko Asic, who scored five goals, Pepperdine fought its way back before eventually running out of energy — and time — once the fourth quarter came around.

In the first half of the match, everything seemed to be going the Gauchos’ way. Senior attacker Mitchell Hamilton and sophomore driver Boris Jovanovic scored two goals apiece before the break, leading to the home team taking a 4-2 lead after two-quarters.

After an early opening third-quarter goal for UCSB, courtesy of senior attacker Thomas Martinho, fans were frantically cheering on the home team as though the game were over. Even with that, Asic rallied his team back, scoring a goal and then assisting on the next to cut the lead to 5-4 with just over three minutes left in the third.

As the frame continued, UCSB got a score back to re-take a two-goal lead, but senior attacker Christian Bradley countered, which led to Asic’s third goal of the game, tying the score at six. Both teams traded one more goal — with Asic’s coming as the clock expired with no time left — before the quarter’s end to go into the final frame tied.

Fans and even the Gauchos looked stunned by the five-goal rally Pepperdine put in the third to get back into the game. However, this night belonged to Santa Barbara, who looked spectacular in the fourth.

After trading goals, senior utility Reed Cotterill continued to come in clutch for UCSB and put his team ahead 9-8 with only 2:54 left on the clock. About a minute later, junior attacker Shane Hauschild put the nail in the coffin for Pepperdine with his second goal of the quarter with less than a minute left to make the score 10-8.

“It felt really good. It was great to get that fourth rank last week, and now finishing the regular season perfect in conference is a huge accomplishment,” Hauschild said.

Despite it being much more difficult than expected, the Gauchos continued to show the resiliency that allowed this team to put up a perfect 5-0 record and jump up to No. 4 in the country, their highest ranking since 1990.

It was also a big plus that seniors Hamilton, Martinho, Cotterill, Liam Lenihan, Cameron Yates, Samer Alkateb and Tor Jensen all got to enjoy the beauty of one more win at Campus Pool. With that being said, playoffs are here and the Gauchos are certainly the favorite to win the inaugural GCC tournament. Let’s see if they do.

“A lot of our big players stepped up,” Wigo said. “It was really good to see a lot of the guys on senior night step up, especially Mitch, [to] get some good goals.”

UCSB’s next match is yet to be determined, but it will be at Pacific for the Golden Coast Conference Tournament.