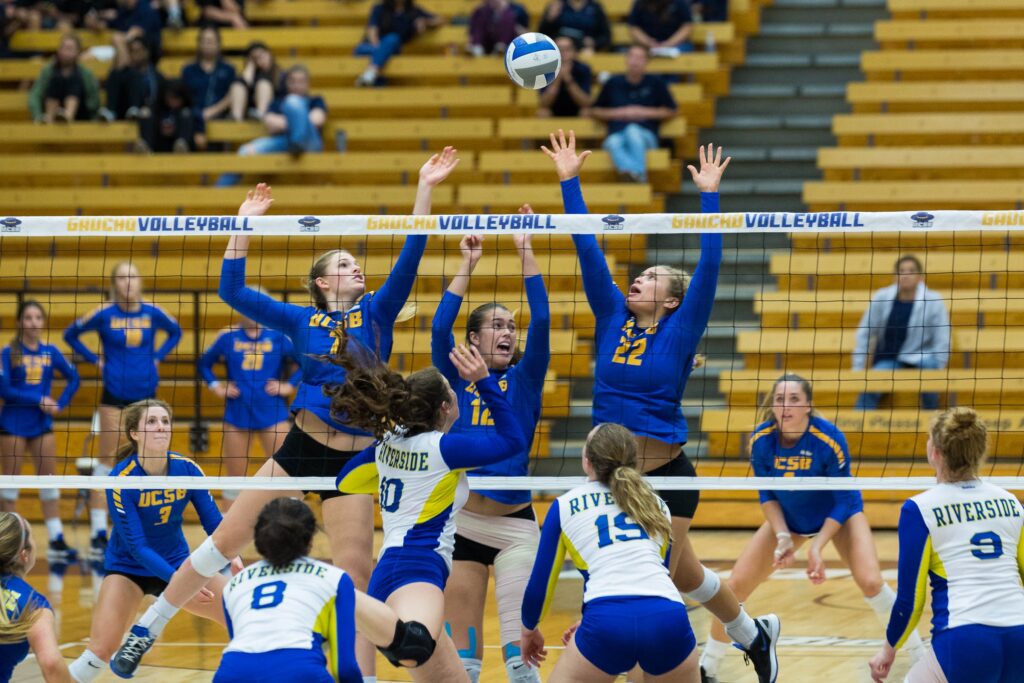 After missing a block in the middle, Megan Rice, Phoebe Grunt and Chloe Allen struggle for the ball. Dustin Harris / Daily Nexus

The UCSB women’s volleyball team had a wrench thrown into their postseason plans this weekend as UC Riverside managed to spoil the Gauchos’ latest streak. The 3-2 victory earned the Highlanders the season sweep over UCSB after the Gauchos’ 3-1 win over Cal State Fullerton Friday night.

Santa Barbara concluded the weekend 17-10 overall and is now 8-6 in Big West play. The losing woes continued for the Titans, who are now 6-22, 1-13 after losses to UCSB and Cal Poly extended their losing streak to 13 matches. UCR ended its two-game skid with the victory over UCSB and currently sits at 8-18 and 3-11 in the conference.

The disappointing outcome came on the heels of a fifth-straight victory for UCSB after defeating Cal State Fullerton. Cal State Fullerton proved to be a worthy opponent despite their 1-11 Big West record (6-20 overall) entering the match, outlasting the Gauchos 27-25 in the first set.

UCSB was taking no part in a close contest for the rest of the match, however, as a 10-point run to start the second set led to the Gauchos holding the Titans under 18 in each of the final three games.

The Gaucho defense was immaculate in those three sets, as Cal State Fullerton wasn’t able to hit above .185, plummeting in the third set with a -.077 kill percentage and seven errors. UCSB’s offense also steadily improved throughout the match, peaking in the final set when it hit .387 with only two errors.

Redshirt freshman Lindsey Ruddins was in spectacular form throughout the evening, compiling 27 kills with only four errors, a .411 kill percentage and 15 digs, completing yet another double-double. A career-high in kills for the outside hitter, Ruddins also provided five service aces and was by far the most dominant player on the court.

She was aided heavily by fellow redshirt freshman setter Hannah Juley, who also contributed a double-double with 14 digs and a match-high 47 assists. Juley was also feeling it from the service line, joining Ruddins and redshirt sophomore Sydney Bast as the three Gaucho players with at least three aces.

Sophomore libero Emilia Petrachi topped 20 digs for the second-straight match, finishing with 21 on the evening and providing the defensive spark that allowed the Gauchos to dominate after a shaky first set.

Sophomores outside hitter Madeline Schneider, middle blocker Summer Kerins and outside hitter Shimen Fayad each had at least eight kills for the Titans, though Fayad was the only player to breach double-digits with 13.

Fayad was able to notch a double-double as well with 11 digs, second most on the team to first-year defensive specialist Madisen Babich’s 16. Freshman setter Rachel Hall was also impressive throughout, her 37 assists good for just under 10 per set.

With the Gauchos riding a tremendous hot streak, heading into their match versus UC Riverside appeared an easy task for the ascending Gauchos as UCR is second to last in the conference standings.

UCSB would take a close opening set 25-23, a late Riverside run giving the Gauchos their first scare of the night, as they had held the fellow UC at a comfortable distance for most of the game. The Highlanders controlled the second, though a late 7-2 run from the Gauchos, including two of first-year outside hitter Megan Rice’s eight kills, brought UCSB within two.

The Gauchos seemed to turn the corner in the third, playing one of their best sets of the season on the way to a 25-9 win. UCSB hit .400 in the game, compared to a -.172 for the Highlanders, and forced 10 turnovers while limiting itself to only one.

After gaining a 15-11 advantage in the fourth, a six-point Riverside run proved sufficient to force a fifth set. They carried their momentum into the tie-breaker, grabbing an early 9-5 lead before a quick four-point retort from the Gauchos locked the teams in yet another draw.

A 6-2 run by the Highlanders clinched the match as the Gauchos fell just short and dropped to two games behind Cal Poly for third place in the conference.

Emilia Petrachi again paced the Gauchos with 21 digs, her third-straight match with 20-plus. Lindsey Ruddins, Megan Rice, senior middle blocker Phoebe Grunt, senior middle blocker Elizabeth Sheffield and first-year outside hitter Chloe Allen all had at least eight kills, though Allen’s hitting percentage of .242 was the highest of the bunch, as errors were a steady issue for the Gauchos.

Hannah Juley had 47 digs for the second-straight match, eight more than UC Riverside’s sophomore setter Chelsea Doyle. Doyle completed a double-double with 14 digs, and was one of four Highlanders with at least 13.

One of those four was senior outside hitter Cristina Maietta, whose 14 digs, 17 kills and two aces accounted for a large portion of her team’s production. Four UCR players also had at least 10 kills, including middle blockers Meg Graham and junior Brooke Callahan, as well as first-year outside hitter Mickayla Sherman.

The Gauchos’ postseason hopes took a major hit this weekend, but the team will still try to finish the season on a positive note with its final two matches next week.

UCSB will travel to Hawaii Saturday, Nov.13 for its second match against the Rainbow Wahine before hosting UC Irvine Wednesday, Nov. 23 for the final match of the 2016 season.