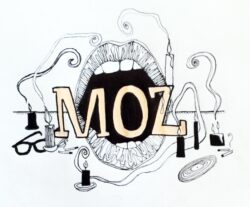 November’s annual Dia de los Muertos celebration is, in my opinion, the time we get to see Santa Barbara at its finest. On Saturday, the plainly commercial space of the Santa Barbara Bowl was awash in a tide of local culture, and the walkway up from the front gate to the concert stage was transformed into a vertical street festival. Altars dedicated to lost loved ones flickered under the candlelight, and stray flower petals seemed to dance aloft on the voices and hands of missing friends. Tributes to fallen idols were in abundance; I teared up a little as I passed two candy skulls painted in the likenesses of David Bowie and Prince. Our own KCSB even had a small shrine dedicated to the programmers that have passed on over the years. In a patio area halfway up the slope, as I passed a group of sequin-clad skeletons savaging a Donald Trump piñata, something occurred to me: Morrissey couldn’t have picked a better event to play.
As I stood in the pit waiting for Moz, music videos and movie clips lit up a gigantic projector screen behind the stage. The mixture of Sex Pistols, New York Dolls, James Dean and Cher made it immediately clear that these had been selected by the man himself. When he finally did take the stage along with a band of dashing young skeleton men in shirtless tuxedos, the crowd responded like drought victims in a rainstorm. He immediately dove into “How Soon Is Now?” and the tremolo set us all rippling. It was a smart call for the opening song, as the dominant sentiment in the audience was something along the lines of, “I’d throw myself in front of a bus for Steven Patrick Morrissey, but he had better play some goddamn Smiths tunes.” Alyssa, a senior at Cal Poly, echoed these sentiments after the show saying she was, “very stoked on him, but he was a bit of a tease. I [wanted] more Smiths.”
After the cheering died down, he quipped, “I sure hope you all enjoy yourselves, because you’re all royally screwed come Tuesday.”  A Cheshire grin flashed across his face as the crowd erupted once more. Mozmania had officially set in, and he could now say essentially anything he wished.  Luckily he (usually) uses this power for good, and after a couple of songs the charming man paused, and the screen behind him lit up once more.  As he sung the opening lines of “Ganglord,” harrowing scenes of police brutality played out behind him. Men in riot gear dashed people’s heads against walls and shot dogs in the street, and the number of fists raised around me made it clear these scenes were all too familiar to the crowd. A round of sober applause sounded out as the last image of an officer smiling behind a riot mask faded to black.
Morrissey was quick to liven up the audience again, starting up with a cover of the Ramones’ “Judy Is a Punk” leading into “You’re the One For Me, Fatty” and “Ouija Board,” two of his solo classics.  Afterward, he performed several of his newer songs, and I admit the show might’ve lagged (musically) at this point. However, Mozzer’s signature brand of animal magnetism seemed to carry us all through the middle. The entire time, eager fans attempted to catapult themselves onstage only to be intercepted mid-flight by a group of expert bouncers. One man in a full skeleton costume was able to make it all the way and gave Morrissey a tender bear hug before a baldheaded man in a polo shirt sprang like a puma from stage right and whisked him away.
Before the set’s finale, the Irish crooner took the time to thank his band, whom he described as “the best platoon from here to the moon.” They all bowed reverently and then polished off the crowd with “Everyday Is Like Sunday” and “First of the Gang to Die.” Morrissey’s dulcet tones were drowned out by a chorus of tearful voices, but not a soul complained. He gave the crowd a coy wave as he and the band left the stage, everyone in attendance knowing full well that the pause before the encore was mere formality. In another calculated move, Moz finished with the raucous Smiths tune “What She Said,” making a heady and frenzied end to the performance. As I walked back down past all of the altars, candles now blown out, I knew that Morrissey had done right by the spirit of the Day of the Dead. He’d awoken a light in all those watching that would never go out.