As of early Wednesday morning, voter turnout was recorded by the Santa Barbara County Elections Office at 55.12 percent. 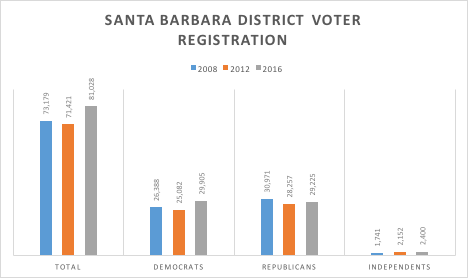 Registering over 13,000 voters for the November election — an increase of 2,000 compared to 2012 — local registration drives catapulted UCSB ahead of other universities such as UCLA, USC and UCSD. Allison Garfield / Daily Nexus

With a total of 222,983 registered voters in the district, approximately 122,899 voting cards were cast in this year’s General Election. The district as a whole registered around 9,600 more people this year than in the 2012 election.

“They have done a better job of turnout in Isla Vista than I have ever seen, over 13,000 voters voted in Isla Vista today, and it’s because of the very, very hard work of these democrat activists,” Das Williams, supervisor elect, said.

In Santa Barbara County, 60 percent of the presidential votes went to Secretary Clinton, 32 percent to Trump, 3.5 percent to Gary Johnson and 2 percent were write-ins. California is undeniably a liberal state, so higher voter turnout likely wouldn’t have changed any results here, but in other states voter turnout could have made all the difference in this pinnacle election.

Millennials proved to be a major force in this year’s election. A photo from SurveyMonkey showing the country’s Electoral College votes if only millennials had voted went viral on Tuesday, with the large majority of them, 473 to be exact, going to Secretary Clinton.

Millennials supported Clinton with 54 percent of the youth vote, but many millennials are angry with rumors of thousands of young people writing in “Harambe” on their ballots or even for voting for third-party candidates. On Tuesday, The New York Times reported, “For the Democratic Party to move forward and win, young people — some of the party’s most vocal critics — cannot be shut out of what will be a rebuilding process.”

The 3rd District County Board of Supervisors had a large turnout of 25,136 votes with Joan Hartmann leading Bruce Porter by 8 percent. The Isla Vista Recreation & Park District had a total of 7,317 votes to reelect Pegeen Soutar as director of the District.

Measures E and F had an underwhelming amount of voter turnout with approximately 4,150 votes on each measure. Measure E passed with a significant majority of 88 percent, but Measure F, which only 62 percent of people voted yes on, did not pass. If voter turnout had been even higher, perhaps Measure F would have gone through or results for various different offices could have been different.

Though turnout was strong, an anonymous Campus Democrats volunteer said that word of mouth was that at 6 p.m. on Tuesday only half of registered voters in I.V. had actually voted.

In 2008, national voter turnout was relatively high at 62.3 percent but dropped in 2012 to an estimated 57.5 percent. This year’s turnout, expected to level around 55.6 percent according to the U.S. Elections Project, shows a trend toward Americans across the country not casting their vote. Reasons for not voting range from being blocked or restricted, being too busy with work and/or childcare, to simply deciding not to vote on principle, according to The New York Times.

A version of this story appeared on p. 5 of the Thursday, Nov. 10, edition of the Daily Nexus.