The Daily Nexus
Volleyball
Gauchos Peaking Towards Season’s Ending, at Home for Weekend
November 10, 2016 at 5:02 am by Liam Bailey

Winners of four straight and five of its last six matches, the UCSB women’s volleyball team will begin its weekend slate of games Friday evening in the Thunderdome against Cal State Fullerton before hosting UC Riverside Saturday night. 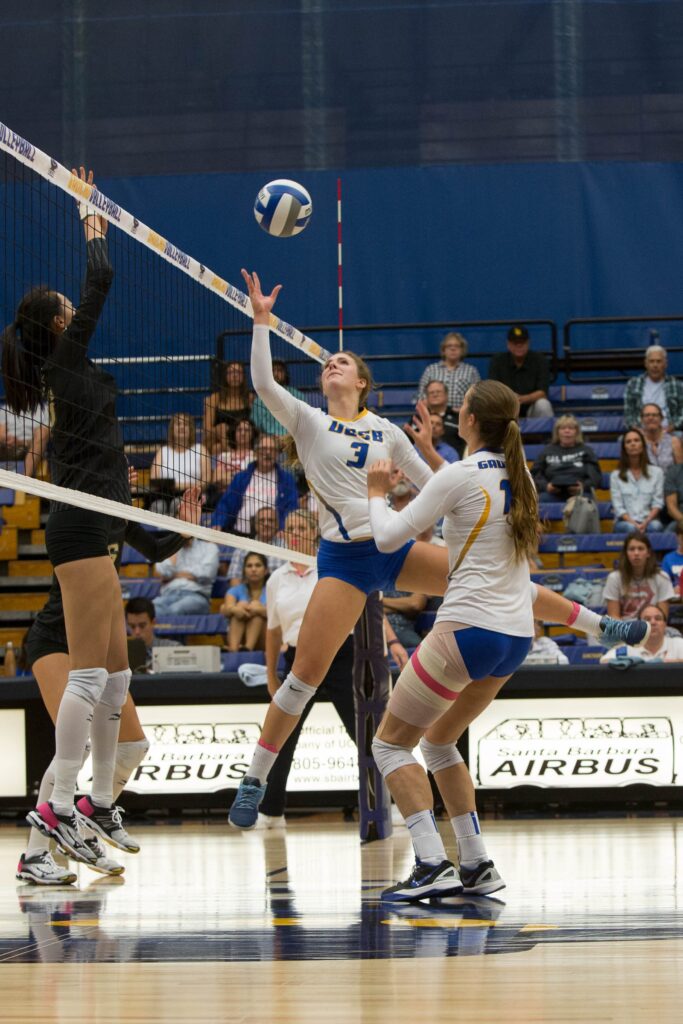 With four matches remaining on the season, UCSB has a chance to reach the 20-win mark for the first time since 2009, a year in which the Gauchos finished 22-8. Currently sitting at 16-9 and 7-5 in the Big West, Santa Barbara must win out the closing matches to achieve the feat.

Cal State Fullerton ranks last in the Big West standings with a 6-20 overall, 1-11 conference record and has lost 10 straight games after opening up the conference schedule with a win against UC Riverside.

Set to enter the Thunderdome with a 7-16 overall, 2-9 in conference record, UCR is coming off a win over Fullerton, snapping a five match losing streak. The Highlanders were able to hand UCSB an upset loss in their previous matchup this season, just under a month ago on Oct. 14.

Both of UCSB’s opponents will have Tuesday evening matches before their weekend tilts, allowing the Gauchos a slight advantage in preparation.

The Titans offensive attack is led by sophomore outside hitters Shimen Fayad and Madeline Schneider who average 3.53 and 3.06 kills per set in Big West play, respectively. Both rank within the top 15 in the conference for the statistic, although both hold hitting percentages below .180, hindering the team’s offensive efficiency.

Freshman setter Rachel Hall is responsible for getting Fayad and Schneider the looks they need, and she leads her team in conference play with 8.0 assists per set.

Defensively, the Titans have received consistent input from their liberos — freshman Madisen Babich and sophomore Torrey Tinney — both of whom join Fayad in the top 16 for digs among Big West competition, and average at least 2.60 per set.

UC Riverside is led by freshman outside hitter Mickayla Sherman, who blew up against the Gauchos in their last match, leading the Highlanders with 26 kills (.400 kill percentage), 11 digs and three block assists. She’s been the Big West’s sixth- most prolific scorer through the conference schedule so far this season and will be the main advisory for the Gauchos on Saturday.

Sophomore setter Chelsea Doyle paces her team with 9.30 assists per set, good for seventh in the conference against Big West competition. The Gauchos will have to look out for her on the serve, too, as her 0.36 service aces per set are good for fourth in conference play.

Senior libero Maddie Hubbell leads her team on the defensive end of the court, ranking sixth in Big West play in digs with 4.11 per set.

The Gauchos continue to rely heavily on the offensive prowess of redshirt freshman outside hitter Lindsey Ruddins who holds sixth place in the conference in kills per set against conference opponents with 3.54. She’s coming off 31 kills in last weekend’s matches, and the Gauchos will need a similar effort from Ruddins to keep their winning streak alive.

Ruddins’s stellar weekend performance resulted in her earning her fifth Big West Freshman of the Week honor on Monday. Along with redshirt freshman setter Hannah Juley receiving the accolade last week, it is now three consecutive weeks in which a Gaucho has been selected for the weekly conference award.

Sophomore libero Emilia Petrachi has upheld the core of the UCSB defense, contributing 4.53 digs per set and leading the team to three game sweeps in two of its last three matches.

Producing at the net has been senior middle blocker Elizabeth Sheffield, who has recently emerged for the Gauchos, registering 23 kills and seven blocks on the weekend.

The setter position was an inconsistent area for the Gauchos last season, but this year Juley has taken hold of the spot and remains helpful throughout the team’s rotations. She’s averaged 10.33 assists per set against conference play and piled up 77 assists over last weekend’s matches.

If UCSB can win these next two matches, that will be six straight for the Gauchos, and they may well take third place in the Big West from Cal Poly.

UCSB will host Cal State Fullerton on Friday, Nov. 11, while UC Riverside will make the trip to the Central Coast to face the Gauchos on Saturday, Nov. 12. Both matches are scheduled to begin at 7 p.m. at the Thunderdome.