The Daily Nexus
Sports
Gauchos Open Season on the Road, Face Iowa St. Cyclones
November 10, 2016 at 5:06 am by Spencer Ault

College basketball will officially make its return this week as men’s and women’s programs across the nation begin their seasons.

As for the UCSB women’s basketball team, it will play its season opener on the road at Iowa State this Friday. It is the first game of the 2016-17 season for both programs.

With the Gauchos preparing to enter the hostile environment of Hilton Coliseum, they will attempt to contain the Iowa State offense, which is predicated on the success of its three-point shooting.

The Cyclones shoot a multitude of threes, something they put on display in their exhibition game against Briar Cliff on Sunday when they concluded the game with 30 long distance attempts. 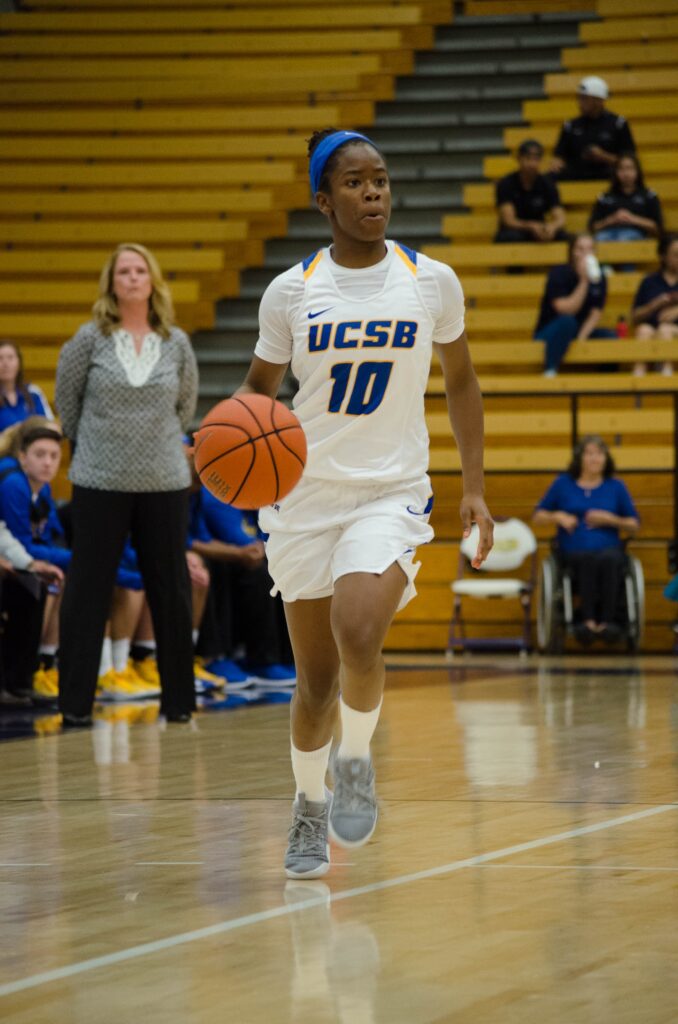 Onome Jemerigbe dribbles the ball down the court while Coach Bonnie Henrickson watches from the sideline. Christina DeMarzo / Daily Nexus

In 2015-16, Iowa St. ranked second in the Big 12 in total three-point field goals made, knocking down 208 to go along with its average of 6.93 three-point makes per game. Nothing restricted the program’s willingness to shoot the deep ball throughout the season as they ended with a total of 678 three-pointers attempted.

Despite making 208 shots from beyond the arc, the Cyclones three-point percentage remained low at 30.7 percent, ranking ninth in their conference.

Therefore, the key to defeating Iowa State is to disrupt the Cyclones from beyond the arc. Inevitably, that is the goal for the Gauchos, who allowed an opponent three-point percentage of 30.9 last season.

“Iowa State is a program, historically, that shoots a lot of threes,” UCSB Head Coach Bonnie Henrickson said. “The thing is, we’ve got to limit the number of threes they get. We’re not trying to get in a ‘who can make more threes contest,’ because that’s not going to be in our advantage.”

The Gauchos don’t stand much of a chance if they try to outgun the Cyclones, but it’s a very different story if they manage to force Iowa State inside.

Doing so not only evens the playing field between the two sides, but it would also go a long way toward keeping what’s sure to be a massive crowd quiet.

“The best way to keep [the crowd] quiet is to not let [Iowa State] hit a bunch of threes,” Henrickson said.

UCSB’s many perimeter players will be instrumental in carrying out Henrickson’s defensive strategy. In practice, Henrickson placed a heavy emphasis on perimeter rotations, shifting from one player to another in an attempt to deny the Cyclones any open threes.

For what it’s worth, the Gauchos were very successful at keeping Cal State L.A. quiet from three-point range in their exhibition game on Sunday, holding the Golden Eagles to 25 percent from long range on 5-20 three-point shooting.

However, doing the same against a program like Iowa State — projected to finish fourth in the Big 12 — will be a much more challenging task.

While the Cyclones’ first look on offense is to the outside, the Gauchos plan to look inside when they have the ball. The addition of redshirt junior forward Drew Edelman, playing her first year for the Gauchos after transferring from USC, has given UCSB a veritable post presence.

You have to, because if you’re not good right there it’s just too easy to guard everything else.”

Edelman demonstrated the strength of that offensive ideology on Sunday, posting 10 points and 10 rebounds in 20 minutes of play. Standing at 6’4”, the center enjoys her role as the focal point of the offense.

“It definitely feels good [to be the first look],” Edelman said. “I can help get some easy buckets, especially early in the game because they’ll collapse and at that point I can look out to the three.”

Standing out at the three-point line will be an array of solid shooters, a new strength for the Gauchos. Junior guard Makala Roper and sophomore guard Coco Miller played that part admirably last year. Roper led the team with 63 made three-pointers and Miller followed with 53. Ole Miss transfer sophomore guard Sarah Porter is another component within the Gauchos’ array of shooters.

UCSB’s perimeter depth extends to the point guard position as well, where veteran senior point guard Onome Jemerigbe is joined by Drea Toler, a redshirt junior point guard who transferred from the University of Oregon.

On Sunday, both Jemerigbe and Toler displayed an affinity for the drive-and-kick, finishing with six and seven assists, respectively.

Roper, Miller and Porter were the overwhelming beneficiaries of those drives, receiving open looks from beyond the arc.

It’s unlikely that Toler and Jemerigbe will be able to have such success against the Cyclones, but the inside-out game could still pay dividends. Combine that strategy with some success in containing the Cyclones from three-point land, and the Gauchos might just have an upset brewing.

The matchup between UCSB and Iowa St. will tip-off on Friday, Nov. 11 at 10 a.m. PST at Hilton Coliseum.

A version of this article appeared on page 1 and continued on page 7 of October 27, 2016’s print edition of the Daily Nexus.