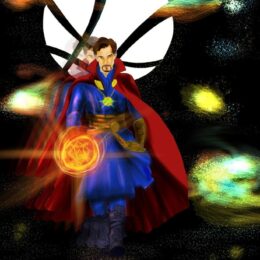 Oftentimes, while watching “Doctor Strange,” it feels like the cinematic equivalent of looking through a kaleidoscope whilst tripping on enough acid to give Eric Clapton pause. In its best moments, the magic-centric movie is a colorful, mind-rending ride through the cracks in time and space, bringing us through a wide palette of dimensions and folding New York City all over itself in moments reminiscent of “Inception,” something which a patron several seats away from me loudly noted to her friend.
“Doctor Strange,” however, is not an avant-garde movie; it is the newest Marvel superhero film (for those of you who live under a rock or think that the movie was directed by Stanley Kubrick). The protagonist is Stephen Strange, a brilliant neurosurgeon not quite brilliant enough to know that looking at your iPad while driving really fast on a bendy road tends to give you a bad case of death. After getting into a car wreck that would kill anyone not played by Benedict Cumberbatch, he embarks on a spiritual journey in the hopes of mending his mangled hands, encountering a host of mystics and magicians, including the redeemed warrior Mordo (Chiwetel Ejiofor) and The Ancient One (Tilda Swinton) who is ancient.
There are a couple things I like about Stephen Strange. Just to get it out of the way, Cumberbatch is, of course, excellent in the role. Also, he looks the part; during the pre-show entertainment, a bit of trivia revealed the character was designed to resemble famous horror actor Vincent Price. Cumberbatch certainly bears quite a resemblance to the late actor, having grown a goatee that ought to be encased in glass. His costume, like that of characters like Iron Man and Ant-Man, is also quite functional in addition to looking absolutely badass. I do not jape when I say that his cape is one of the film’s best characters. One of the best things about the character is that he has a good character arc that you get invested in, although, admittedly, when you get down to it, this arc can be pretty much summed up as him growing out of being a complete dick.
To whom is he a dick? Pretty much everyone initially, including his love interest, Christine, played by Rachel McAdams. She serves as a fun comedic foil to Strange and complements him well enough, but she never quite became an interesting character in her own right. Nor did the villain Kaecilius, whose name I had to go on Wikipedia to type and sounds like some kind of nasty medical condition. Despite his fairly eye-catching power to make swords that look like they’re made out of light, he is the usual dark mirror Marvel baddie, serving as a villainous reflection of Strange. He’s the possibility of what the hero would be if he went down the dark path. Oy vey. Been there, done that. The fact that I was far more invested in Mads Mikkelsen when I saw him in the “Rogue One” trailer that I’d already seen several times before should tell you enough.
The fact of the matter is that “Doctor Strange,” despite its absolutely incredible CGI work, leaves a bit to be desired in the writing department. The secondary characters especially could have used a little more polish, as a lot of them had some pretty vague motivations, and one ended up changing allegiances faster than Anakin Skywalker after killing Mace Windu. But the script is by no means horrible. We still get some damn good one-liners and, while generic, the story never manages to become confusing or dull.
All in all (wow, haven’t used that since elementary school), the film is mostly on par for the course in Marvel’s case. “Doctor Strange,” despite some pretty noticeable flaws, is still a bunch of fun to watch, with the quips we’ve come to expect from Marvel, an awesome titular hero and probably the best creative onscreen visuals the company has put out to date.
Take notes, DC.  If you screw up John Constantine, I will come after you.

This is a really solid review, I saw the movie the Thursday it came out. It was great to see non fans of Marvel coming out and being taken on a fun trip in to the mystic realm of the Marvel CInematic Universe. I’m surprised to see how well these movies still engage the audience.