The Daily Nexus
Fine Arts
Bernhard Showcases Talent and Heart
November 10, 2016 at 5:00 am by Allison Garfield 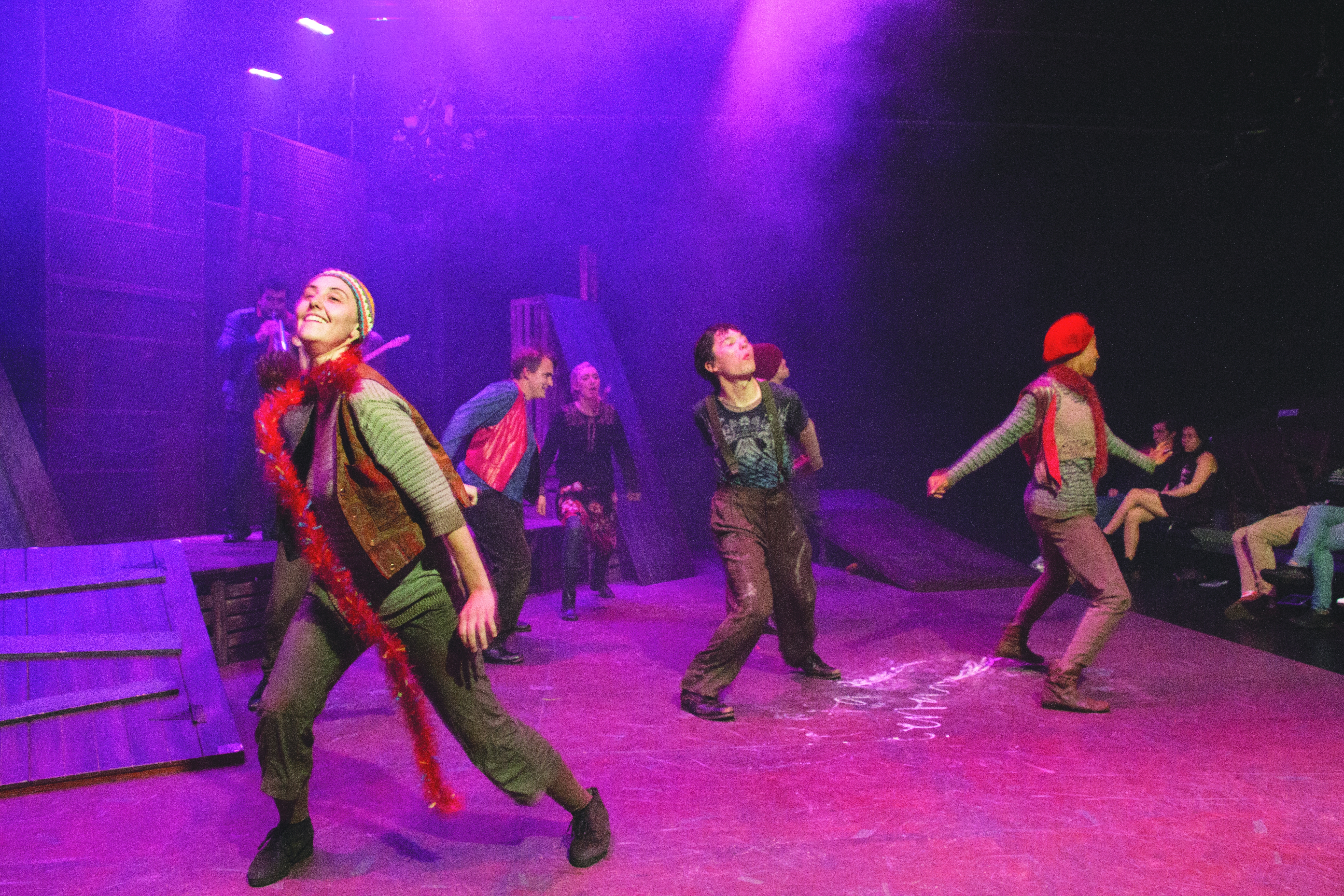 Bernhard” is a darkly comic story set anytime and everywhere. The play is commissioned by LAUNCH PAD, an artist-in-residency theater program that culminates in a full-scale “preview production” as part of the UCSB Theater & Dance departmental season. The play was written by Lynn Rosen, resident playwright at New Dramatists in New York City, and is directed by Princeton and Juilliard alum Annie Torsiglieri. Running from Nov. 4-6 and 8-13, the show is currently in its last week of performances at The Performing Arts Theater.

The twisted comedy follows 17-year-old Bernhard, played by Fletcher Hoffman, as he searches for his estranged mother during war time. He leaves his home and grandmother, convinced that the only way he can survive is to turn into a cockroach and close himself off from the world and people surrounding him. He is faced with struggle after struggle and continually has to isolate himself from the people he meets, including the innocent but fierce Rebecca, portrayed by Truly Polite.

The intimacy of the Theater provides the perfect atmosphere for the production. The set is not elaborate, but it is centered on minimal set pieces built with wood alone. The entire cast was dressed in tattered, dirty rags establishing the dark mood of the show well. One of the most significant parts of the show, however, is the light production. With starry lights draped from the ceiling and a multitude of spotlights and blackouts, the lighting, designed by Vickie Scott and Mitchell Jakuba, is definitely a highlight of the play.

Although the cast is small in size, it makes up for a lack of members with talent. The tiny, yet immensely passionate cast is remarkably in-sync with one another, chiming chorus lines at the exact same time and spitting in to metal cans in unison. Also tasked with establishing the setting, the company not only has to act, but also whistle, sing and play various instruments.

Approximately halfway through the show, the audience finds itself jolted with energy by a sudden, invigorating rock number complemented with trumpet playing, choreography and all. The live music was unexpected and innovative; it proved to be an eerily beautiful addition to the drama, moving it along when it fell into its few lulls.

Though the play is certainly gloomy, the most delightful moments were the comedic ones. Zachary Macias, fourth-year in the BFA Acting Program, portrays the character Kindly Soul, a spin-off of the Witch from Hansel and Gretel. His comedic timing is perfect, making the audience laugh out loud on multiple occasions. Wyatt Colmas, first-year biology major, stated, “The man in the house [Macias] was really funny. He was the needed comedic relief.”

The play runs 90 minutes with no intermission, forcing the audience to experience Bernhard’s entire journey in one sitting. Hoffman, a junior in the BFA program, gives a stunningly haunting performance, making the entire hour and a half feel like one thought in the character’s mind. The audience sympathizes with his character, who continuously meets with his romantic interest, Rebecca, and is then separated from her. The play in its entirety entertains the audience while simultaneously forcing them to empathize with every character and the situations they face.
Colmas stated, “I think [the timing of the play] did add to the thought behind the story, him telling it as a reminiscent type of thing. The straight hour and a half was just very intense. And it essentially being a monologue was a really interesting choice.”

“Bernhard,” at its core, is about survival and the paths we choose to travel in life. Torsiglieri states in the director’s note, “[‘Bernhard’] is the story of the indomitability of the human spirit in the face of crises. It is one man’s quest to hang on to humanity despite the absurdity of life and all it throws his way. It encourages audiences to feel, think empathize and realize that we are all in the same boat, no matter who we are … and that we sink or swim together.”