The Daily Nexus
News
Trump Claims Swing States for an Executive Seat
November 9, 2016 at 1:01 am by Cheryl Sun and Megan Mineiro 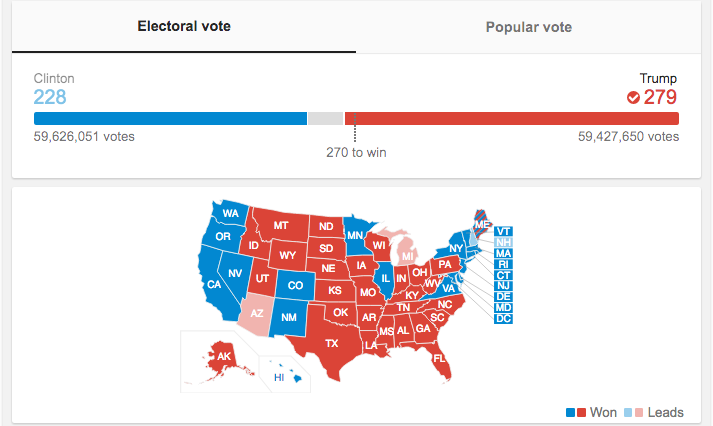 Photo via Google 2016 US election results

A wave of red swept the electoral map Tuesday night as Donald J. Trump won in a stunning upset the 2016 Presidential election with a victory in 30 states.

Trump finished out the night with 279 electoral votes of the 270 required to win, compared to Hillary Clinton’s 218. Though polls initially projected Clinton was in the lead when voting opened Tuesday morning, after a record turnout of millions of early voters, Trump steadily pulled ahead as the night progressed.

After taking control of the swing states of Ohio, North Carolina and Florida, Trump gained the electoral votes of states previously supposed to be safe wins for the Clinton campaign, such as Wisconsin. Trump will be sworn in as the 45th president of the United States on Jan. 20.

The UC Office of the President released a statement Wednesday morning recognizing the “consternation and uncertainty” felt by many members of the university community in light of the election results.

In the statement, UCOP said the UC is a proudly diverse community that welcomes students, faculty and staff of a variety of backgrounds.

“Diversity is central to our mission. We remain absolutely committed to supporting all members of our community and adhering to UC’s Principles Against Intolerance.”

The UC’s Principles Against Intolerance was unanimously approved by the UC Regents in March, including UC Santa Barbara Chancellor Henry T. Yang, and outlines the UC’s definition of discriminatory behavior.

“As the Principles make clear, the University ‘strives to foster an environment in which all are included’ and ‘all are given an equal opportunity to learn and explore.’ The University of California will continue to pursue and protect these principles now and in the future, and urges our students, faculty, staff, and all others associated with the University to do so as well.”

In his victory speech, Trump said Clinton congratulated “us … on our victory,” and urged Democrats, Republicans and Independents across the nation to come together as “one united people.”

“Now it’s time for America to bind the wounds of division; we have to get together,” Trump said. “I pledge to every citizen of our land that I will be president for all Americans, and this is so important to me. For those who have chosen not to support me in the past, of which there are a few people, I’m reaching out to you for your guidance and your help so we can unify our great country.”

John Podesta, chairman of the 2016 Hillary Clinton presidential campaign, announced late Tuesday night that Clinton would not address the country until the final votes were counted. At 11:40 PST, major news outlets reported Clinton had called President Elect Donald Trump to concede the election.

When Clinton spoke to supporters Wednesday morning, she said that while the nation may be more deeply divided than previously believed, Americans must accept the result of the election and allow Trump the chance to lead.

“Our constitutional democracy enshrines the peaceful transfer of power, and we don’t just respect that, we cherish it. It also enshrines other things: the rule of law, the principle that we are all equal in rights and dignity, freedom of worship and expression,” Clinton said.

“The University ‘strives to foster an environment in which all are included’ and ‘all are given an equal opportunity to learn and explore.’”  -UC Office of the President

Tuesday’s election held the promise of a historic turning point in American history with the election of its first woman president. But Clinton encouraged young people to face the pain of the loss with the knowledge that “fighting for what’s right is worth it,” and specifically thanked her young female supporters for their faith in her.

“And to all the women, and especially the young women, who put their faith in this campaign and in me, I want you to know that nothing has made me prouder than to be your champion,” she said. “I know we have still not shattered that highest and hardest glass ceiling, but some day someone will and hopefully sooner than we might think right now.”

Nearing the end of the night, many states were too close to call, with the state of New Hampshire splitting support for the two candidates by a difference of just 18 votes at approximately 9:15 p.m. But as the final ballots were counted, Trump took Pennsylvania and Wisconsin, giving him the final 31 electoral votes needed to reach 270.

Running under the slogan “Make America Great Again,” Trump’s campaign was turbulently characterized by numerous scandals and his shifting stances on topics such as abortion, immigration and NATO. But following his victory Tuesday night, Trump said his term would be marked by efforts to unify and reform the nation.

According to Trump, he hopes to work with other nations “willing to get along with us.”

“We expect to have great relationships,” Trump said in his speech. “We will seek common ground, not hostility; partnership, not conflict.”

Trump said he plans to “begin the urgent task of rebuilding our nation” to strengthen the American economy and will not accept “anything less than the best.”

“We will double our growth and have the strongest economy anywhere in the world,” Trump said. “No dream, no challenge is too great … We must reclaim our country’s destiny.”

“We will seek common ground, not hostility; partnership, not conflict.”    -Donald Trump

At his final rally Monday evening in Pennsylvania, Trump challenged his voters to deliver justice at the ballot box and “clear the swamp” of Washington cronies, including Hillary Clinton. Trump promised to defeat the Islamic State (IS, also known as ISIS or ISIL), build a wall between the United States and Mexico and fully repeal Obamacare. His use of social media to broadcast his unfiltered speech above the scope of journalists demonstrates a possible shift in campaigning strategies.

His victory marks the fall of the “blue wall,” a term used by political experts to describe the Democratic disposition in many states established throughout the past six presidential elections that makes it difficult for the Republican party to gain ground.

“I’d like to thank some of the people who really helped me with what they’re calling tonight a very, very historic election,” Trump said. “I love this country.”