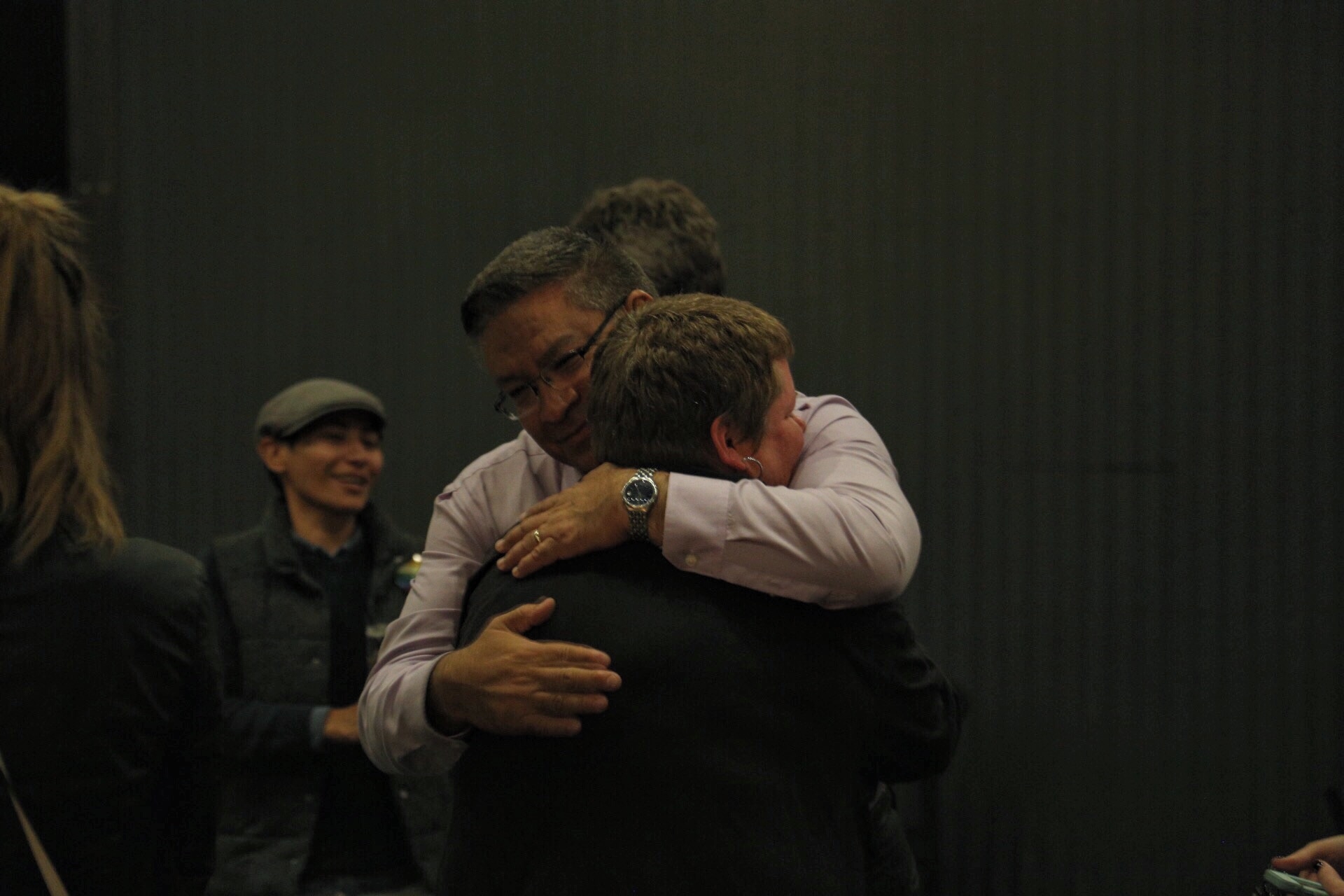 Salud Carbajal joyously embraces a friend and campaign supporter after learning about his victory at the Mill Santa Barbara on election night. Jenny Luo / Daily Nexus

On election night, shortly after hearing results, Carbajal told the Nexus he was grateful to the volunteers and students who supported him throughout election season.

“I am very optimistic and feeling very grateful to all the voters who put all their faith and confidence in me to represent them,” he said.

It was a race to watch, with Carbajal up 52 percent to 47 percent at 10 p.m. Tuesday night while Democrats including Monique Limón, Hannah Beth Jackson and Carbajal gathered at the The Mill. Residents sipped on wine while anxiously watching the TVs for updates on the race. 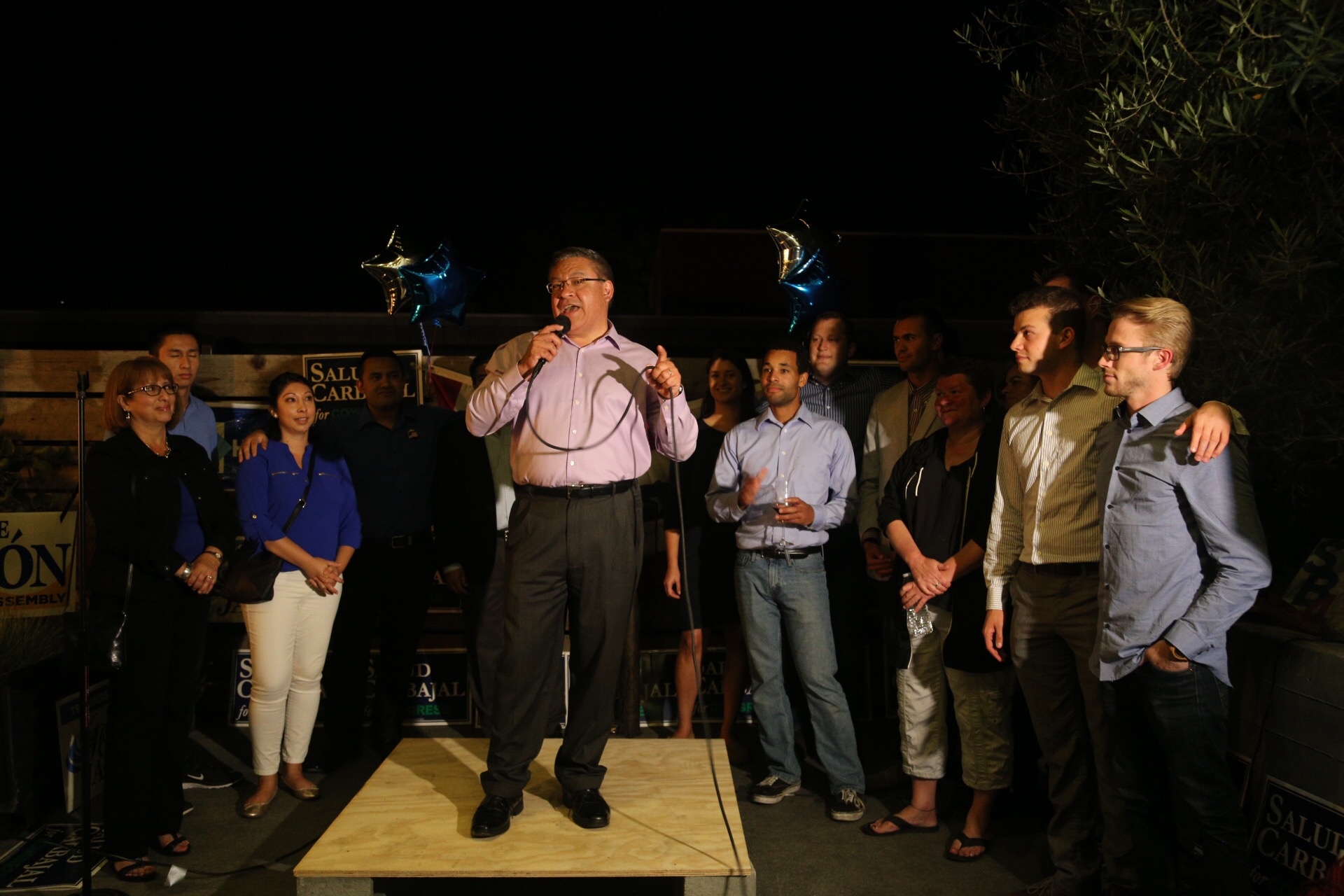 Carbajal speaks to an audience at the Mill Santa Barbara on election night prior to results being announced. Jenny Luo / Daily Nexus

Carbajal received significantly higher campaign contributions than Fareed with a total of $2,873,441 while Fareed received $2,130,889. Fareed spent significantly less than Carbajal with a net operating expenditure of $1,788,887 to Carbajal’s $2,424,323. It was one of the most expensive races in the entire country.

Endorsed by President Barack Obama, Planned Parenthood and Hillary Clinton, Carbajal focused his campaign on the pursuit of equality, championing against LGBT discrimination and the wage gap while promising to fight for the middle class.

In a speech to UCSB students in October during an Associated Students Senate meeting, he discussed making college more affordable by reducing interest rates on student loans.

“To think that I could be an immigrant child, have working-class parents who worked in the fields, and to have the opportunity to run for Congress is just amazing. It reminds me of how great our country is.” — Salud Carbajal

Fareed ran an opposing campaign based on decreasing wasteful government spending to decrease debt, reducing taxes on families and small businesses and the preservation of California’s agriculture industry while protecting the environment.

Fareed also campaigned in 2014, but lost in the primary to Chris Mitchum by 0.5 percent.

Both candidates agreed on the necessity of social security and higher education, though Fareed focused on vocational and technical training while Carbajal aimed to decrease the rising cost of tuition.

Despite these similarities, the campaign has been far from civil, with both candidates attacking each other at debates and with several malicious campaign ads. Carbajal relentlessly criticized Fareed’s early support of Donald Trump with several ads saying Fareed is “just like Trump.” Fareed’s campaign accused Carbajal of approving multiple pay increases for county supervisors, prompting Carbajal to send a “cease and desist” letter in October claiming that the ad was “defamatory.”

During the Democratic watch party at The Mill Tuesday night, Carbajal gave an emotional speech saying, “To think that I could be an immigrant child, have working-class parents who worked in the fields, and to have the opportunity to run for Congress is just amazing. It reminds me of how great our country is.”

After calling up his family and volunteers, he continued. “I want to thank each and every one of you who made my journey possible today … I’m committed to all those issues, and we’re going to do it together … let’s stay positive, we’re gonna get there.”