The Daily Nexus
Sports
Gauchos Dominate Sunbirds 82-62 in Home Exhibition
November 7, 2016 at 6:55 am by Quinn Moslander

The UCSB men’s basketball team came away victorious from 2016-17 season exhibition game against Fresno Pacific University after beating the Sunbirds 82-62, in a game where it held the lead for most of the match.

Despite the victory not counting in the win column for the Gauchos, the win certainly instilled some confidence in the young Santa Barbara team and in junior transfer Jalen Canty in particular. 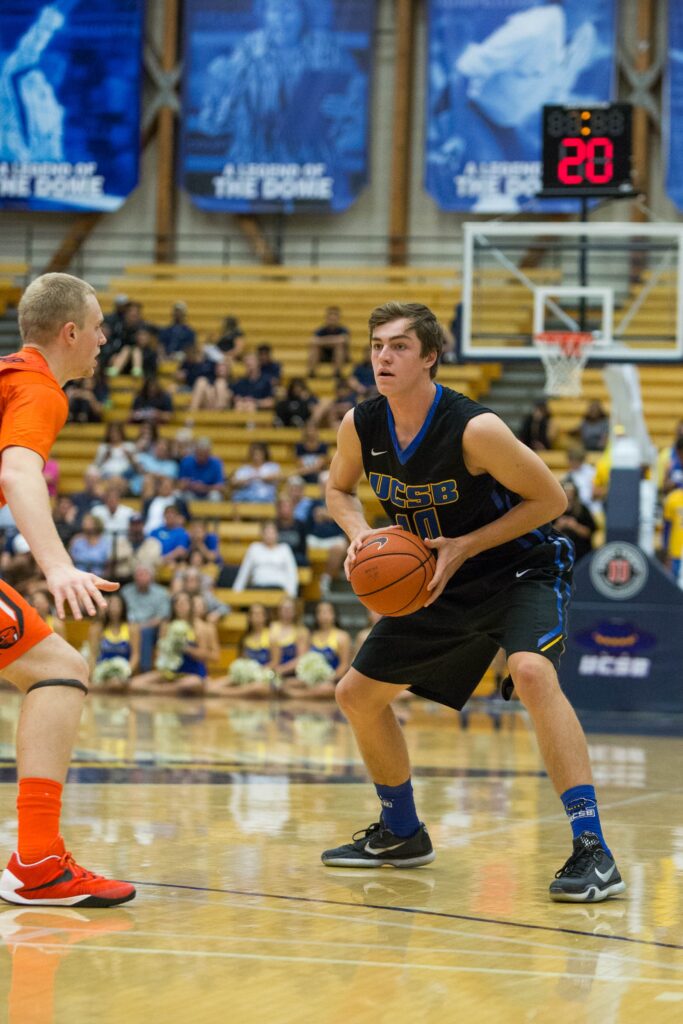 “I had a lot of jitters my first half and Gabe [Vincent], one of my closest friends, told me to slow down and play my game, and that’s what I did the second half,” Canty said.

“Yeah, I loved his play. I thought he was good, especially second half, very aggressive, trying to score, he rebounded well both halves,” Head Coach Bob Williams said.

The California native led all scorers with 17 points and ran all over the court grabbing seven boards and registering two blocks.

The home team started a bit slow but managed to take an 8-5 lead into the first official timeout. After a made three-pointer by FPU’s junior point guard Jordan Belasco that tied the game, the Gauchos scored seven unanswered and saw most of its starting five head to the bench.

After two made baskets by the Sunbirds, sophomore forward Ami Lakoju scored six points in a row over the course of 52 seconds to extend the UCSB lead to nine at 21-12.

By the end of the first half, the Gauchos took an impressive 36-22 lead. Three of Santa Barbara’s newest additions, Canty, and freshman guards Christian Terrell and Clifton Powell Jr. combined for 11 points.

Without any single player emerging as a beast for Fresno Pacific in the first half, the Sunbirds worked together to earn their 22 points with three-pointers scored by senior point guard T.J. Viney, Belasco and junior guard Sam Holmes.

Later in the final frame, UCSB successfully made three long balls in a row, one from junior guard Gabe Vincent and two from senior point guard Eric Childress, to take a 51-29 lead.

After that, at the 8:29 mark, freshman guard Terrell made a fantastic steal, quickly passing down the court to a wide-open Childress.

The senior caught the pass mid-stride, scoring effortlessly, raising Gaucho supporters to their feet as the home team took a game high 26-point lead at 69-43.

Having only scored over 80 points on five occasions last season, the Gauchos finished the game with a whopping 82 while holding their opponents to 62. Fifty of those points were earned by four players — Canty, Childress, Vincent, and Lakoju — with each scoring in the double-digits.

Overall, Santa Barbara saw many good things from its young team, but primarily from the big three that will be leading the team this year: Childress, Vincent, and Canty.

Childress played great finishing with 10 points, seven assists, and six rebounds. Vincent, on the other hand, was only 3-10 from the field but all three shots made were from long distance, plus two free throws from the line saw him scoring 11 points on the evening.

“I was pleased with the leadership from Eric [Childress] and Gabe [Vincent],” Williams said. “They played well but more importantly were so poised and had good leadership with the young kids as they got rattled.”

There are a number of seasoned players on this team, but the Gauchos gained new talent this year and though they appeared to be comfortable and fluid on the court, there is room for improvement as the season progresses.

The UCSB men’s basketball season will officially start with a non-conference game against Nebraska-Omaha on Saturday, Nov. 12 at 2:00 p.m. at the Thunderdome.