The Daily Nexus
Science & Tech
Service Above and Beyond: Chemical Engineering Professor elected to the National Academy of Medicine
November 3, 2016 at 4:07 am by Kelly Shi

UC Santa Barbara professor of chemical engineering and bioengineering Samir Mitragotri has recently been elected to the National Academy of Medicine — one of the highest honors in the health and medical fields. His distinguished contributions to healthcare include engineering various technologies for diagnosing and treating diseases through drug delivery and introducing improvements to major health problems today.

As one of 79 newly elected members to the Academy, Mitragotri is dedicated to addressing challenges and advancing healthcare through interdisciplinary approaches. Recognized for his major contributions to medicine, Mitragotri’s field of work has practical, ground-breaking applications that demonstrate an interconnectedness between two disciplines: engineering and medicine.

Initially trained as a chemical engineer, Mitragotri was exposed to applied medicine during his Ph.D. program. It soon became clear to him that the principles of chemical engineering could be used to solve medical problems, beginning his pursuit of drug delivery research.

Mitragotri joined UC Santa Barbara as a chemical engineering assistant professor in 2001, and is now the Mellichamp Professor of systems biology, the founding director of the Center for BioEngineering and part of the Technology Management program on campus. Additionally, he is an associate editor for the Journal of Controlled Release, editor in chief of the journal Bioengineering & Translational Medicine and an editorial board member for several other journals. He has produced over 200 publications, given over 250 presentations and invented over 100 issued patents. 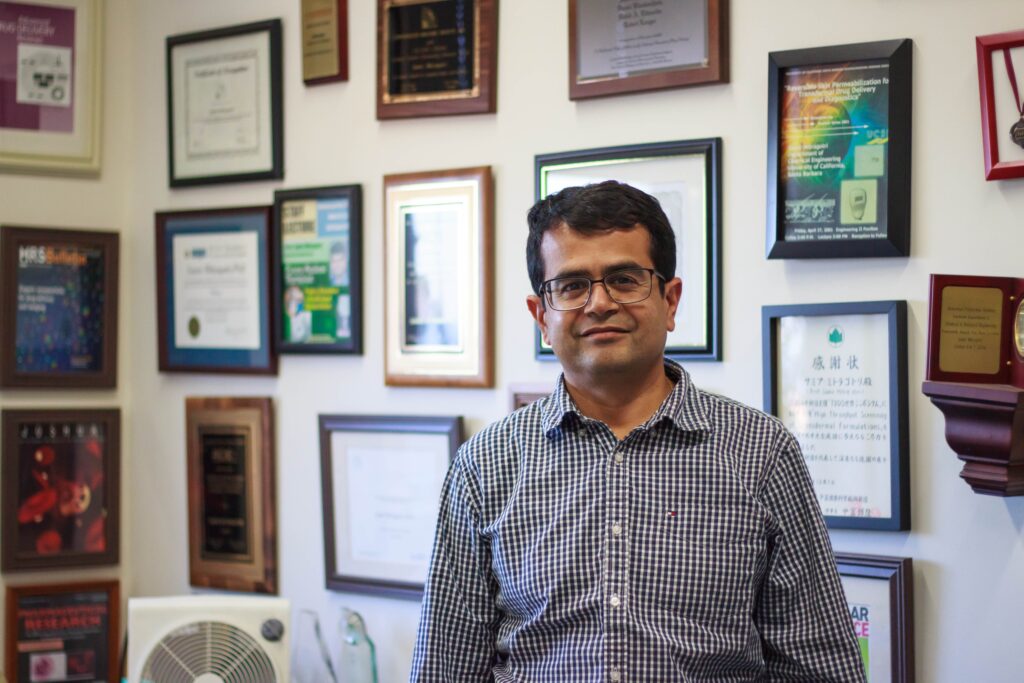 Samir Mitragotri, along with 79 other members, was elected to the National Academy of Medicine for his outstanding commitment and contribution to service at the NAM’s annual meeting in Washington D.C on Oct. 16, 2016. Kelly Shi/ Daily Nexus

His current research and laboratory efforts focus on drug delivery and biomaterials, impacting an array of noninvasive drug delivery methods including transdermal, oral, targeted and biomimetic systems. In broad terms, drug delivery is the scientific engineering approach to converting drugs into beneficial therapies.

Mitragotri expresses the goal of his laboratory research: to figure out how medicine can be effectively delivered to the patient.

“Just because you have a medicine doesn’t mean it can reach the site very effectively,” Mitragotri said.

Drugs are delivered to patients through a variety of mechanisms: pills, powder, nasal sprays, eye drops and ointment, to name a few. In some cases, the drug must be injected, which runs the risk of misuse and contamination. The laboratory process includes two main efforts, and according to Mitragotri, “The first effort is focused on noninvasive drug delivery systems.”

The basic principle involves applying the drug in the form of an ointment or topical cream to the skin, where it will be absorbed through the skin and to the circulating blood. Patches exist for small molecules like nicotine, but this idea doesn’t work for proteins because the skin is designed to prevent the entry of larger molecules.

Mitragotri has developed a number of ways to make the skin porous using devices and formulations that can be placed on the skin. The skin’s primary barrier is its topmost layer, the stratum corneum. His research focuses on using experimental and theoretical tools to assimilate the barrier’s structural-permeation relationships and its properties.

“It’s a remarkably resilient membrane. You can make it porous and it can heal itself,” Mitragotri said.

The biological mechanism behind the skin’s impermeability has to do with its lipid bilayers — thin membranes made up of two continuous layers of lipid that act as cell barriers. The lack of flexibility in its lipid chains is a unique feature of these bilayers. However, when certain chemicals like fatty acids are applied, they can insert themselves into lipids, increasing membrane fluidity and allowing for transport of larger molecules. The challenge therein lies with the idea that skin lipids must be selectively fluidized so as not to affect membranes of other cells.

“It’s a long process. In the lab, we work on fundamental principles,” Mitragotri said. “There is a significant component of understanding. We cannot fix anything we do not understand.”

Another way to enhance the delivery process is to physically make the skin porous through the use of ultrasound. When low-frequency ultrasound is applied to the skin, small bubbles called cavitation bubbles appear on the skin, permeabilizing the superficial skin in a harmless manner.

The second part of the research work is focused on targeted delivery. A potent drug or medication may exist, but unless it is delivered specifically to the target site, it may cause adverse effects. Mitragotri’s lab develops strategies utilizing nanoparticles, which encapsulate the drug and locate targets through specialized ligand designs.

“A big part of our effort is focused on developing tools to understand, to transport, and during that process, we come up with new ways to control the transport,” Mitragotri said.

The lab carefully considers all factors in the evaluation of nanoparticle performance — from polymer shapes and sizes to deformability — in hopes of significant innovations and contributions to biotechnology, health and wellness.

“A key hurdle in developing an effective medicine is the delivery system, so what I hope to see is some of the technology that we have developed and are developing to make a profound impact on the treatment of these diseases,” Mitragotri said.