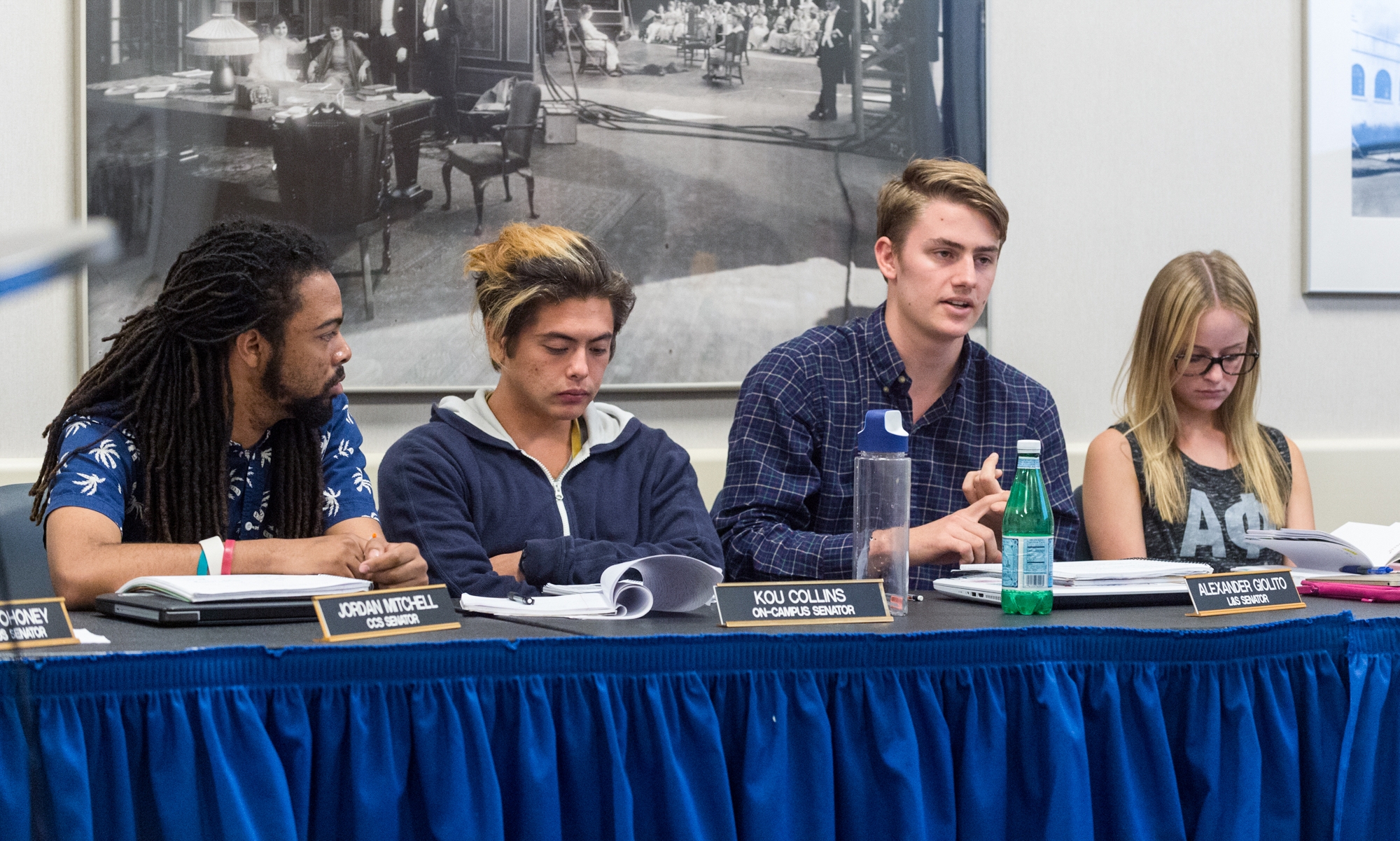 College of Letters & Science senator Alexander Giolito speaks during the weekly Senate meeting on Wednesday, October 26, 2016. The Finance and Business Committee’s decision Monday is pending approval from the A.S. Senate at this Wednesday’s meeting.

UCSB College Republicans received $5,000 from the A.S. Finance and Business Committee for an upcoming event featuring Ben Shapiro, a political commentator who will present a criticism of the Black Lives Matter movement.

Shapiro, former editor of conservative news source Breitbart, last spoke at UCSB in 2013. He has previously been banned from speaking engagements at other universities and was escorted off the CSU Los Angeles campus in May 2016 due to protests.

During the College Republicans’ lengthy presentation, speakers swore more than once and had to field multiple questions from the finance and business committee, including doubts about safety.

“Our purpose is not to be offensive for the sake of being offensive; that’s childish, and no one wants that,” Andrew Gates, president of College Republicans, told the Nexus. “We believe that offering a different perspective would open a civil dialogue.”

The hefty security budget of $650 highlights an underlying risk of violence. Gates has organized similar events in the past and reassured the committee there would be no tolerance for any form of violence.

“We won’t assault anyone,” he said at the meeting.

Two attendees in support of College Republicans were seated at the front of the room wearing “Make America Great Again” hats, drawing looks of disapproval from other audience members.

Shapiro has been vocal in his criticism in the Black Lives Matter movement, saying that it lacks values and acts as a source of violence.

“Obviously, Ben Shapiro has a message, and we agree with that message,” Gates said, “Anyone who thinks he’s irrational or immoral or the worst person ever is free to [say] so at the Q&A portion of the event.”

“I understand the purpose of the Black Lives Matter movement; I understand the reasoning behind the name,” Gates said, but added that he takes issue with how statistics are applied to support assertions of inequality in black communities.

“It’s sort of a clever way of in academia to get away with saying shitty things about white people,” he said.

After heated discussion between committee members, finance and business committee chairman Reilly Hobson interjected, reminding everyone that ideology does not influence whether a group should receive funding.

After an initial objection, followed by a vote with seven members voting to approve funding and four members abstaining, College Republicans were granted the funds.

They are pursuing additional funding from Young Americans for Liberty as well as other conservative political organizations in the Santa Barbara area.

The funding is pending approval by the A.S. Senate during Wednesday’s meeting at 6:30 p.m. in the Flying A Room of the UCen.

Best part of the hearing was when the College Republicans’ grad advisor went “down the rabbit hole” (a quote from Gates) of conservativism: that “BLM is a hate group” (this remark received snaps from one of his peers in the audience) and that “everything Black Lives Matter says is just stupid.” Andrew Gates tried to clean up this PR mess, which is why the hearing lasted so long. AS’s follow-up questions often got two different answers from these two guys: the grad advisor and president. Meanwhile, the female treasurer of the club stood there and didn’t say a word. To… Read more »

I’m sorry did you just assume their secretary’s gender!?!! You oppressive shitlord.

“Female” is a sex, not a gender. Don’t conflate the two, you oppressive shitlord.

No….they’re the same thing… I hate to break it to you.