Few things inspire such intense feelings of awe, fear and admiration as the wonders of the natural world. With the expansion of our own development, however, few humans have the privilege of experiencing nature that has been left untouched by destruction. Although many believe that some areas of the world will never recover their natural plant and animal life, Bob Poole believes differently. With his newest footage of Gorongosa National Park, he hopes to prove that humanity and nature can exist together.

The series of scenes, entitled Paradise Reborn: Mozambique’s Gorongosa National Park, is part of the National Geographic Live, a collection of lectures accompanied by footage presented to a live audience. The series is a melding of science, activism, photography and filmmaking, allowing viewers to access the natural world through visual art. Poole’s presentation covered his efforts to restore much of the lost wildlife back to one of Africa’s most important natural parks

The renowned filmmaker presented his scenes to an eager audience of all ages on Sunday in Campbell Hall. The lecture hall was brimming with excited chatter and smiling faces. With a friendly demeanor, Poole related the story of his childhood in Kenya and his close relationship with Africa’s wildlife from an early age. After years of studying the environment and conservation, he became a cameraman for an environmental film project. His love of nature and his growing skill behind the camera led him around the world, documenting different places.

His assignment in Gorongosa National Park documented the efforts to bring back the animal populations that had been reduced by warfare and poaching. The scenes Poole and his crew captured included much of the behind-the-scenes processes of filming out in the wild. Shots of Poole building a giant protective metal rack around his car demonstrate the dangers of getting close footage of potentially dangerous creatures. “The elephants there were very dangerous and aggressive,” Poole said. The crew had to be protected in order to film them.

Other shots of wildlife featured unique camera angles that reflected animal behavior. One scene featured an eye-level shot of a wild yellow-billed heron hatching in a nest with incredible clarity. Poole revealed how he had to climb a tree and build a canopy for his camera to get the shot. A high definition photo of a lion’s face also came with a story as Poole explained, “With lions, you want to be at eye level with them or looking up at them” so as not to excite aggressive behavior. 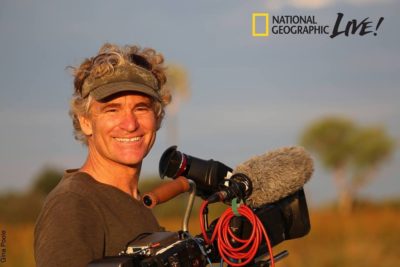 Many scenes were filled with sweeping aerial shots that captured the entire landscape. In one, a widespread lake bed dotted with tiny spots of trees shimmered in the sunlight, while an overview of the thick forest canopy demonstrated the far-reaching growth of the park’s vegetation. The bird’s-eye view conveyed not only the size of the park but also its majesty and awe-inspiring serenity. Poole described the park when he first knew it as a “big, vast, empty wilderness … which was incredible. It reminded me of the Africa that I had seen as a kid.”

While many of the project’s scenes were filmed with smooth panning and simple, still landscape shots, others were filmed with Poole’s own perspective in mind, adding to the thrill of suspenseful scenes. Several scenes in the presentation feature elephants charging at Poole’s crew. The camera shakes more in these scenes than in others as the vehicle they are in

quickly speeds away, creating the illusion that the audience is really there in the bouncing car. The sweeping camera finally lands on the angry elephant charging straight ahead, as though it is charging directly at the camera. This illustrates the ferocity of these animals and the power of nature against a human being.

Through his filming, Poole hopes that people will develop an appreciation for nature, especially for areas that have lost wildlife, like Gorongosa. About conservation efforts, he said, “I saw places in Africa where the bush grew back and the wildlife returned and I can think of so many places … because it is so resilient, nature.” His filming, from clear, intimate shots of animals to large, vast landscapes conveys the beauty and importance of every part of the ecosystem and the need to protect it. Most of all, his presentation is a beacon of hope for many devastated places that nature can return.