The dim room stirred in anticipation as nearly every seat was filled with eager bodies. The stage was brightly lit in hues of blues, red and violet. On Thursday night, UCSB’s own Campbell Hall hosted a performance by the legendary funk and soul jazz saxophonist Maceo Parker as a part of Arts & Lectures’ Roots series. Parker is most known for his work alongside James Brown in the 1960s and with Parliament-Funkadelic in the ’70s. After going solo in the ’90s, he began playing alongside legends like Prince and De La Soul.

The crowd, composed of mainly older adults and a few college students, sat in the massive auditorium waiting for the first act to go on. The room was almost completely full and many were buzzing with excitement, creating a very high energy in the room.

Opening for Parker was The Jones Family Singers, a band made up of family members from Houston, Tex. Performing in the style of gospel blues and jazz, this was their Santa Barbara debut. They had amazing stage presence, directing the audience to stand up and dance along with them. Their large vocal range rang through the hall as their five vocalists filled the room with bluesy lyrics. The energy they brought to the stage was so powerful that many people stood up and jived along while clapping to the beat. One of the main vocalists then employed a call-response method, successfully engaging with the audience by transporting them back to the roots of gospel. The crowd was so high-energy and so responsive, one could feel more than just the music. 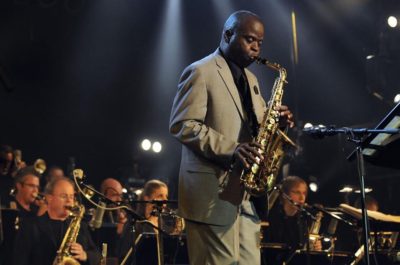 After a 20-minute intermission, Maceo Parker was introduced to the crowd, which immediately went wild. The screams of the crowd were almost deafening, drowning out the sounds of the announcer. The music started and the crowd went almost silent. The heavy bass and strong funky drum pattern complemented the smooth sounds of Parker’s saxophone. Add in the brass trombone, a guitar and a piano, and the blending of sounds brought you back to the funkadelic grooves of the 1970s. Parker’s music epitomizes what funk is; the rhythmic tune of the bass emphasized the down beat alongside the jazzy and soulful blues. The compilation of intricate sounds blended together so effortlessly, varying between slow jazz and a faster upbeat, funky tempo. One could hardly sit still. Many were shaking their heads, tapping their feet and swaying to the intense rhythm. At one point, many had gotten up out of their chairs to dance to the music. The entire set was accompanied by shouts of love and encouragement as well as constant clapping and whistles. The legend played well-known songs by other famous artists like Ray Charles, Jamie Foxx, Marvin Gaye and Ben E. King. Parker continually sang in his deep, throaty voice “We love you,” engaging with the audience while also showing his appreciation. He made small jokes here and there, really talking to his audience, confirming his ability to connect with the crowd. The response back to Parker was electric and almost tangible. The audience grooved to the tunes as the sharp guitar riffs and the blunt plucking sound of the bass echoed through the hall. The energy, almost as palpable as the music itself, rang through the ears of every person experiencing Parker’s talent. The show ended with a very long, rad drum solo, and Parker played the crowd out. Screams and claps reverberated through the large hall.

UCSB alumnus Patricia Oreño said that this was a wonderful time. “As a child of the ’70s, I grew up with funk, and I’ve always been a fan. I had so much fun. I don’t come to these events as often as I should, but I’m glad I came to this one. I hope they have him back because I will be back for him.”