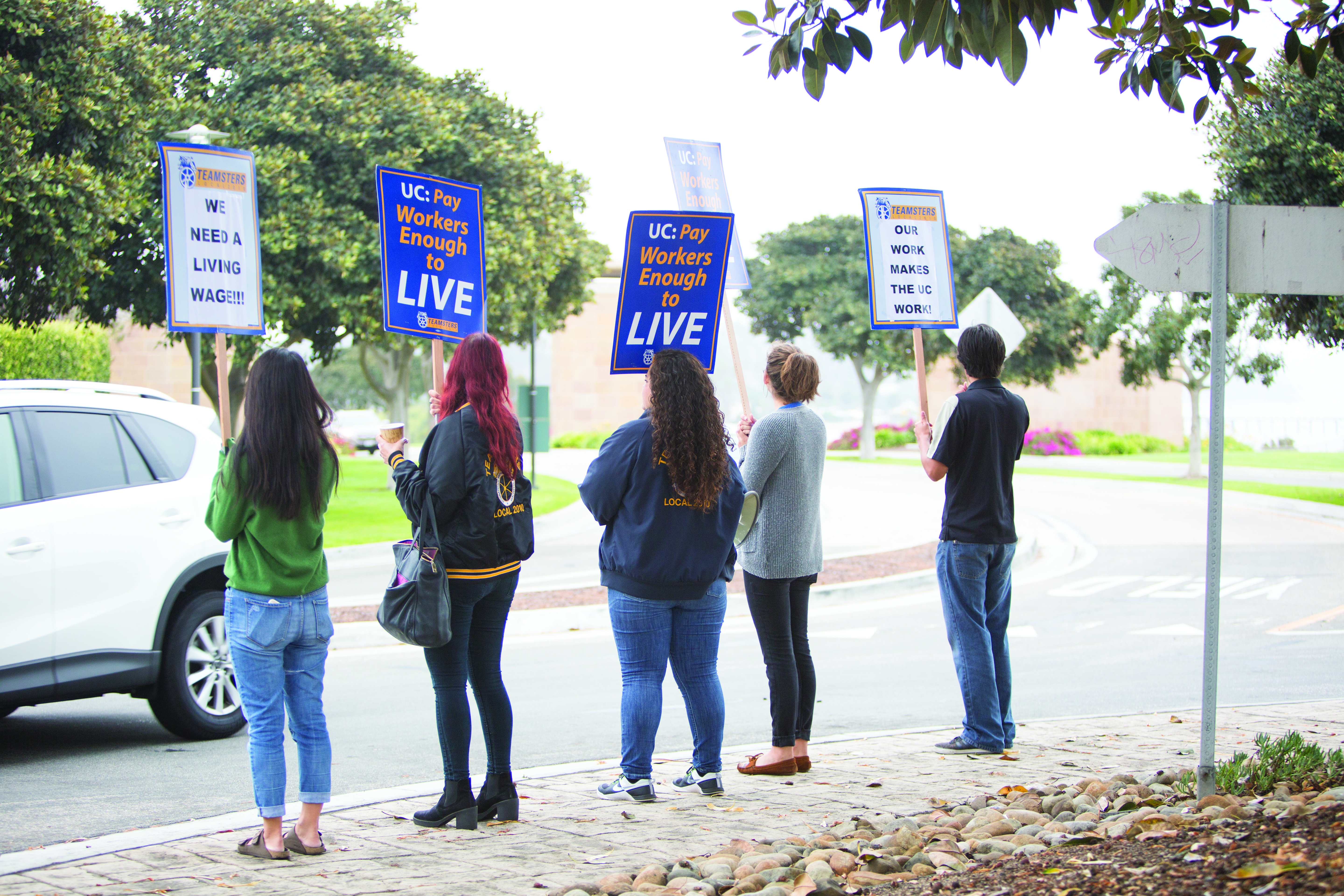 Outside the headquarters of the University of California in Oakland, researchers Peter Dreier and Megan Bomba sat alongside two officials of Teamsters Local 2010. Behind them: signs that read “UC: Pay Workers Enough to LIVE.”

The Teamsters Local is negotiating with the university system over clerical and administrative support salaries. Part of the union’s campaign is to persuade outsiders that the UC’s hardest-working employees are going to bed hungry and likely showing up at work that way.

This explains the presence of Drier and Bomba, researchers at Occidental College’s Urban & Environmental Studies Institute. The pair had just finished Exhibit A in the Teamsters campaign, a study that finds a remarkable 70 percent of University of California clerical and support staff are “food insecure,” or lacking access to food at some point in a year.

That 70 percent finding is about 5.5 times the rate of food insecurity among all California households. This is even more remarkable because UC’s Clerical and Allied Services Unit earns 47 percent above the median Californian individual income ($46,583 vs. $31,587).

Beneath those extraordinary numbers are some elementary research problems. Drier and Bomba used an abbreviated six-question survey to measure food security rather than the 18-question survey the USDA recommends. According to the USDA, the six-question survey is “less precise and somewhat less reliable than 18-item measure” and “does not measure the most severe levels of food insecurity.”

The report’s methodology is troubling in other ways. The authors acknowledge that their 2,890 respondents volunteered to take the survey online. That raises the possibility that those who responded were overwhelmingly (and unscientifically) attracted by questions about hunger. That’s called “self-selection,” and there’s no evidence the researchers accounted for a non-random sample.

Translation: the shorter survey and self-selection may have biased the results to overreport food insecurity.

The Teamsters have used this sort of science to produce political findings before. A previous study requested by Teamsters Local 2010 from the Economic Policy Institute estimated that 93 percent of UC clerical workers do not earn enough to cover a basic family budget. The study was built on the assumption of a one-parent, one-child household, though it’s not clear that’s representative of UC clerical worker households.

Food insecurity is a real problem and the researchers correctly point out the negative effects it has on wellbeing. There is no doubt single-parent households face significant strain. But it is not clear why UC clerical workers suffer from food insecurity more than five times the average Californian while making above the individual median income. Studies that are methodologically flawed to overestimate the problem do a disservice to those who are actually going hungry.

If the study’s findings are correct, they raise a question the researchers did not ask: why can’t University of California support staff afford to eat? The answers may be related to other trends: the UC system has increased the number of high-paying administrative positions by 60 percent over the past decade. At the same time, UC students have seen an increase in tuition of over 200 percent since 2000. These hikes make college less affordable for students who, in a separate study, report high levels of food insecurity.

At least one UC official said the timing of Drier and Bomba’s report is suspicious, coming as it does during contract negotiations with Teamsters Local 2010. “I’m not surprised to see these kinds of things sort of planted, if you will, to affect the collective bargaining process,” said a university regent.

A recent California Policy Center study found that UC Berkeley’s pay distribution is more unequal than Haiti’s, the world’s most unequal country. Many administrators and professors make six-figure annual salaries, ironically including those in Cal’s Center for Equitable Growth.

Andrew Heritage is a California Policy Center fall Journalism Fellow. He is a doctoral student in political science at the Claremont Graduate University.