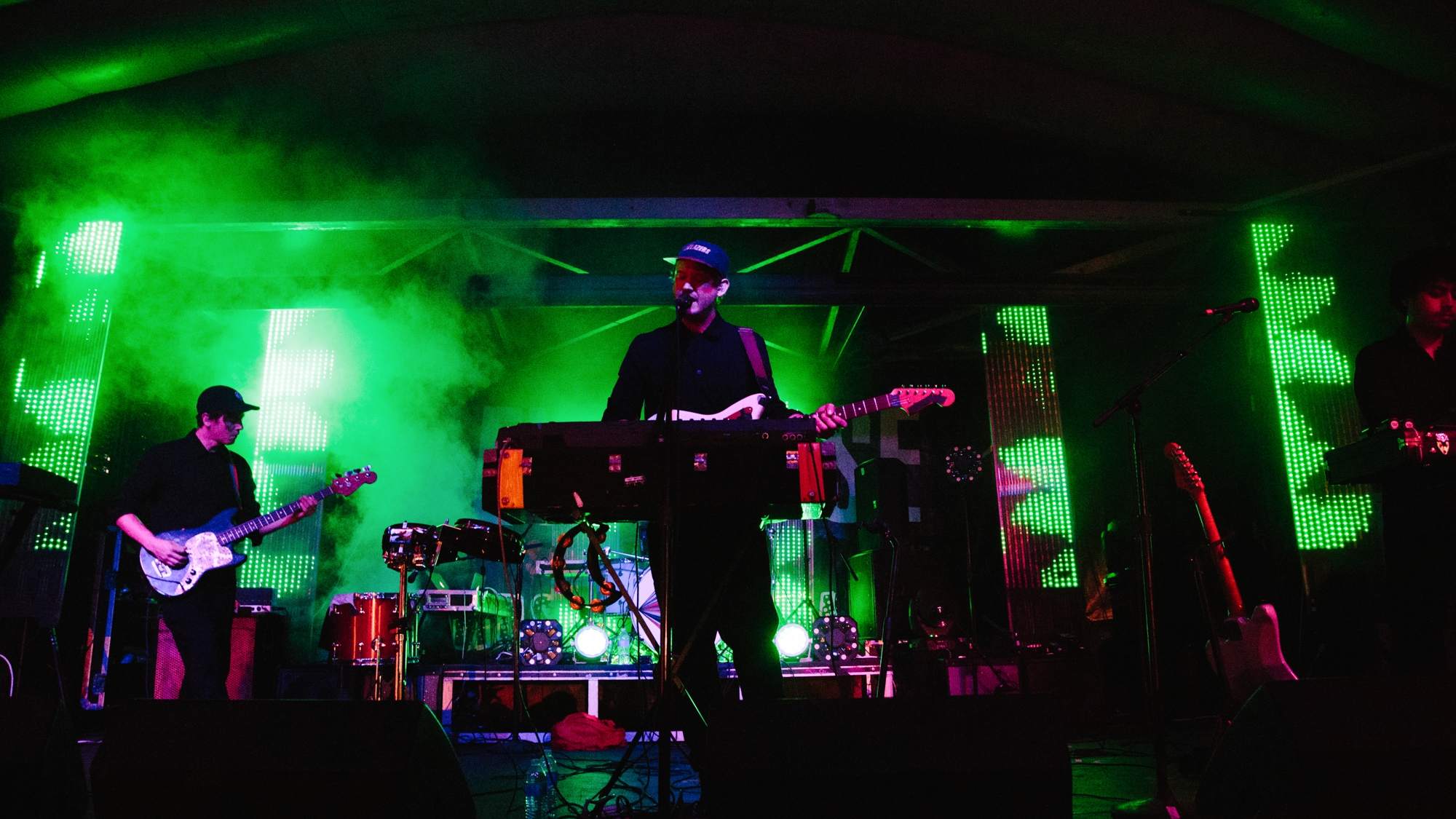 As students from all over California, the United States and even the entire globe, it can sometimes be hard for Gauchos to recognize themselves as part of the Santa Barbara community. Many of us can easily spend four years here without leaving I.V. and campus to see the amazing things happening in that wider community in Goleta and Santa Barbara. Though many of us will only be a part of it for four years, it has so much to offer if you’re willing to put yourself out there. This past weekend’s New Noise Music Festival Block Party was a great opportunity to experience the community and witness the unique cultures we are lucky to be around.

A friend and I had heard the Block Party was the highlight of every year and were particularly excited about Saturday’s show, which featured headliners STRFKR and Unknown Mortal Orchestra. Making sure to get there early to see the openers — because you never know what you might discover — was a good decision. The Block Party consisted of a single stage and about a dozen booths representing different parts of the community, along with a Beer Garden, made use of by plenty of Santa Barbarans of age. With a little bit of time before the first of the four bands came up, we decided to visit the different booths before checking out KOLARS. 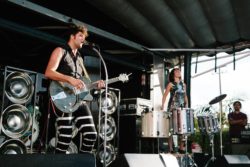 What’s astounding about seeing little-known openers is that you can never predict what you might get. In that way the tarot reading we’d gotten earlier at the KCSB booth had prepared us for the experience of a KOLARS show. The band features only two members, Rob Kolar, the guitarist and lead singer, and Lauren Brown, perhaps the world’s only full-body percussionist. As the two came out to start the set, Brown stood on a large sideways drum surrounded by two more drums and a singular cymbal as Kolar took his spot behind the microphone, guitar in hand. The song started and the drummer in the futuristic silver dress started tap-dancing on the drum as part of the percussion! Right then, I knew that this was why I loved seeing openers I know nothing about. Not only did KOLARS have a unique style of percussion, but their overall sound was spectacularly unique as well. The band clearly drew inspiration from many artists, from their futuristic outfits and electronic embellishments to the Elvis-esque growl of Kolar’s voice to the cover of “King of Carrot Flowers Pt. 1” by Neutral Milk Hotel. With so many inspirations from all over the rock-electronic spectrum, the result was something unique but familiar and irresistibly danceable. Talking to the group after their set as they walked around and visited the booths, we learned the L.A.-based band loves Santa Barbara and had performed at the festival before as part of their previous band. After discussing Kolar’s inspirations, we asked Brown how she keeps up her stamina to dance and jump on a drum for 45 minutes each show. Brown says she’s able to do it because performing “isn’t tiring at all because it feels like I’ve just finished a good run.” The drummer’s “runner’s high” was just an example of how much energy the band projected out into the crowd during their set. In the end, we walked away with a USB featuring all of the band’s music. I knew then that New Noise wasn’t like any festival I had been to before. Something special was happening here, and that was community. This wasn’t a massive festival where you are separated from those performing by an endless sea of people. Anyone could go up and talk to them because they were just people enjoying the community like the rest of the festivalgoers.Before the next set, we enjoyed some cheap but delicious fully loaded hot dogs and checked out a few different booths selling unique hats, giving away organic, gluten-free energy bars and fighting for more ethnic studies programs in the area. 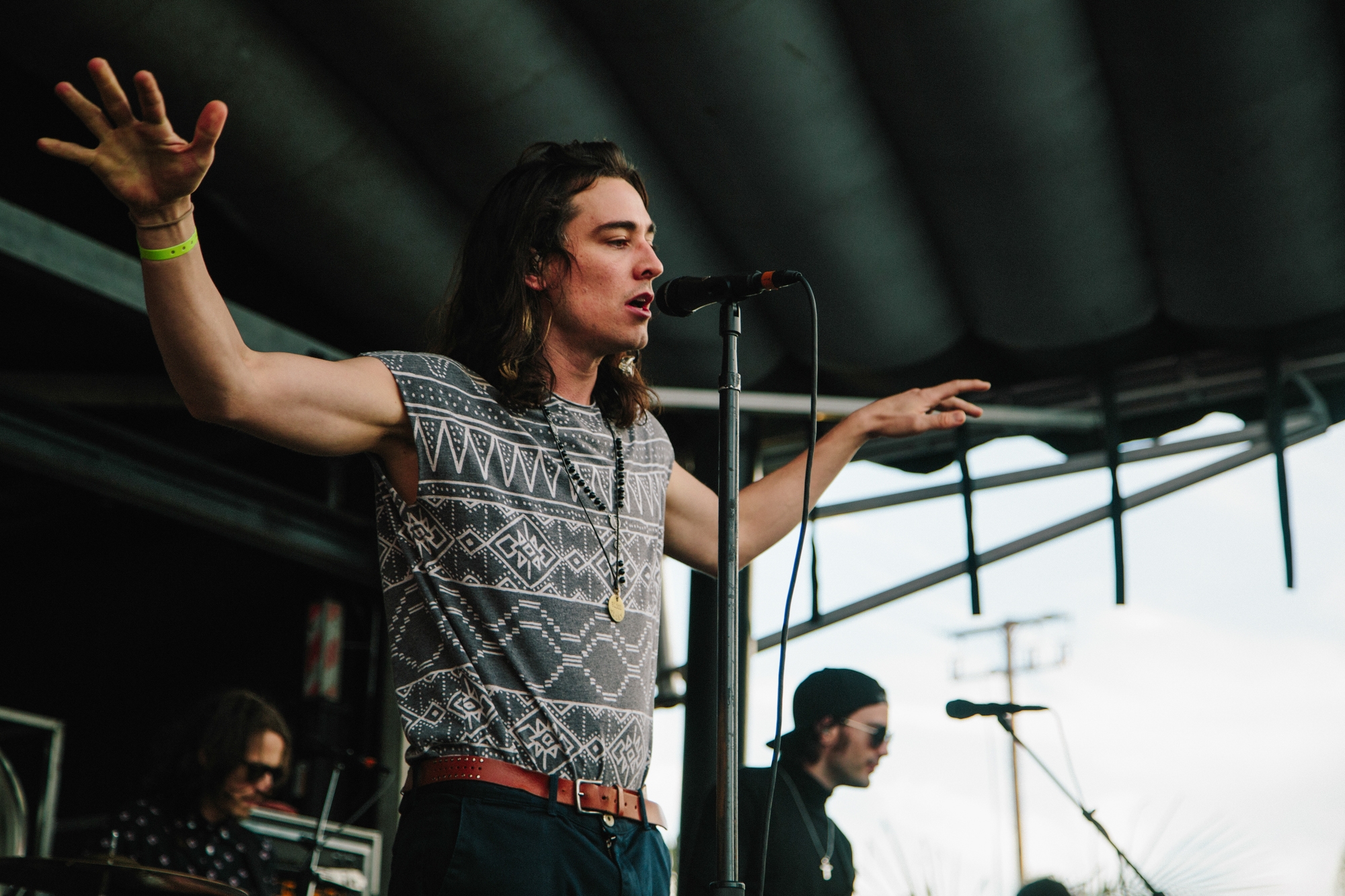 Soon enough, Night Riots came on and rocked the stage with their unique mix of alternative rock, gothic punk and pop rock. Even if the band’s sound wasn’t in your normal wheelhouse, you couldn’t deny they brought a lot of energy to the stage as lead-man Travis Hawley danced and got the crowd involved. Several times, the various band members joined the drummer in percussion, including an impressively coordinated routine between Hawley and the lead drummer Rico Rodriguez. The San Louis Obispo-based band clearly had a lot of chemistry together, as they started jamming together in high school. We had a long conversation with the lead singer about songwriting and the band’s fairly intense practice schedule. It was so cool that the up-and-coming band didn’t think they were above having a real conversation with fans, and it just reinforced for me the community aspect of New Noise.

As day faded to night, Unknown Mortal Orchestra performed their unique psychedelic brand of indie pop-rock that I’ve constantly been playing on my Spotify since the concert ended. The band combines the soulful voice of lead singer, guitarist and front-man Ruben Nielsen with the beautiful keyboards of Quincy McCrary and the rhythms commanded by Amber Baker and Jake Portrait on drums and bass, respectively. The spectacular thing about their set was that the band descended into improvised solos between songs that went on for minutes and sounded like a jam session from a hallucinatory dream world. While the band might not be the most danceable out there, UMO’s music is perfect to simply close your eyes to and marvel at the remarkable skill and psychedelic nature of their unique blend of styles. 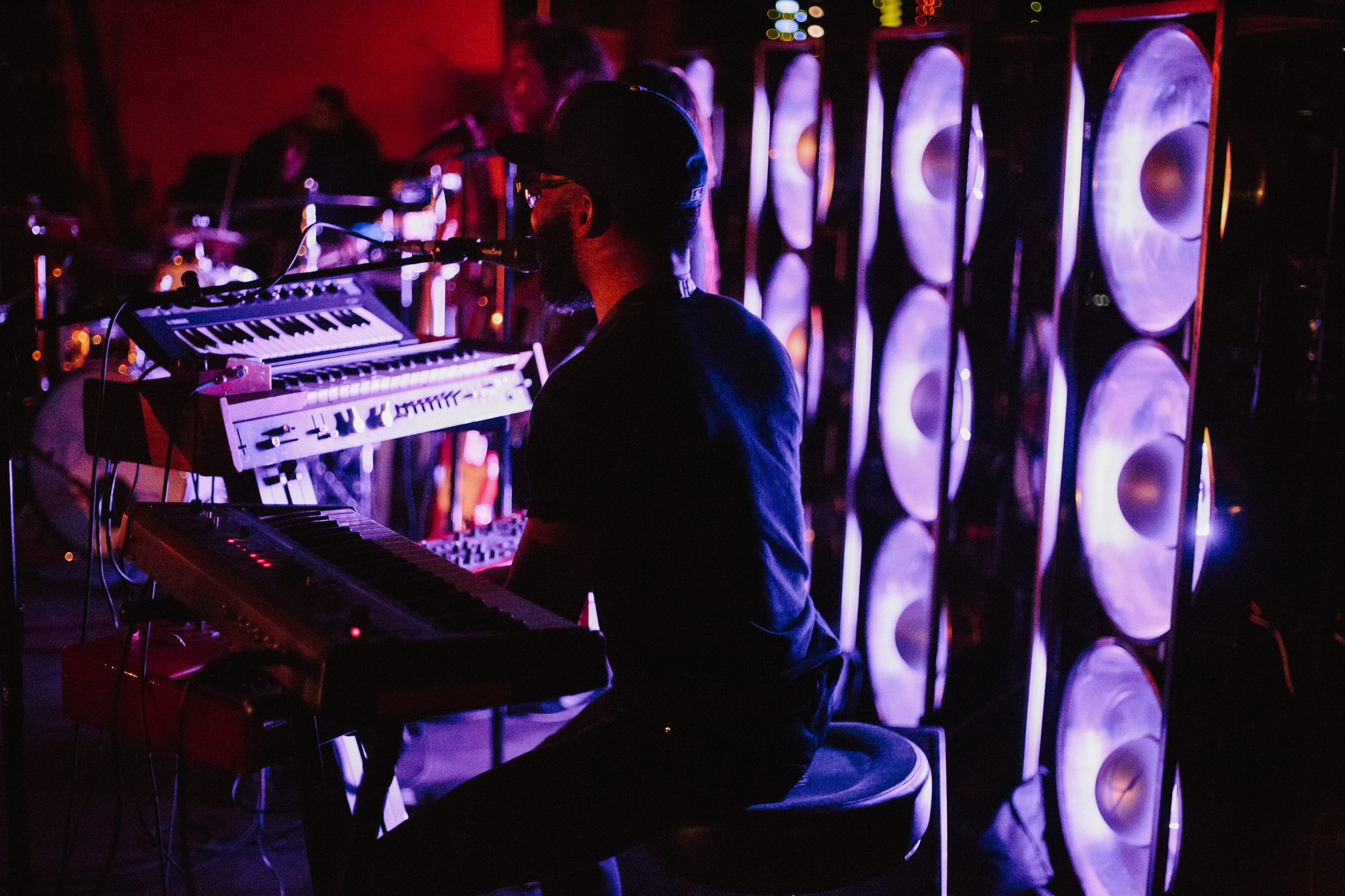 The Block Party ended with a final performance by headliner and indie electronica dance group STRFKR. The headliner finished the night off perfectly as the crowd lost its inhibitions and danced the night away. The group, led by Joshua Hodges, clearly had a lot of fans as the crowd went wild for their songs with dancing.

As we walked back to the bus, I reflected on the community I was a part of here in Santa Barbara. I felt a strange kinship to the people I had just enjoyed the festival with as the crowd eventually dispersed to different bars and restaurants down State Street. Soon enough we caught our bus and the festival was over, but the experience I had will stick with me. As we ate at Freebirds to cap off the night, I felt a connection to Santa Barbara and like I was a part of its community, and I knew I wouldn’t miss the next chance to see what else the city could offer.