The Daily Nexus
Sports
Gauchos in Vulnerable State, Hopeful in Final Two Matches of Season
October 27, 2016 at 5:02 am by Antonia Bird

Looking to turn things around this weekend after suffering two tough losses to UC Riverside and UC Irvine in last weekend’s series of matches, the UCSB women’s soccer team will prepare for both its last home and road matchups of the season. It will face UC Davis and Long Beach State, the final two games of conference play. 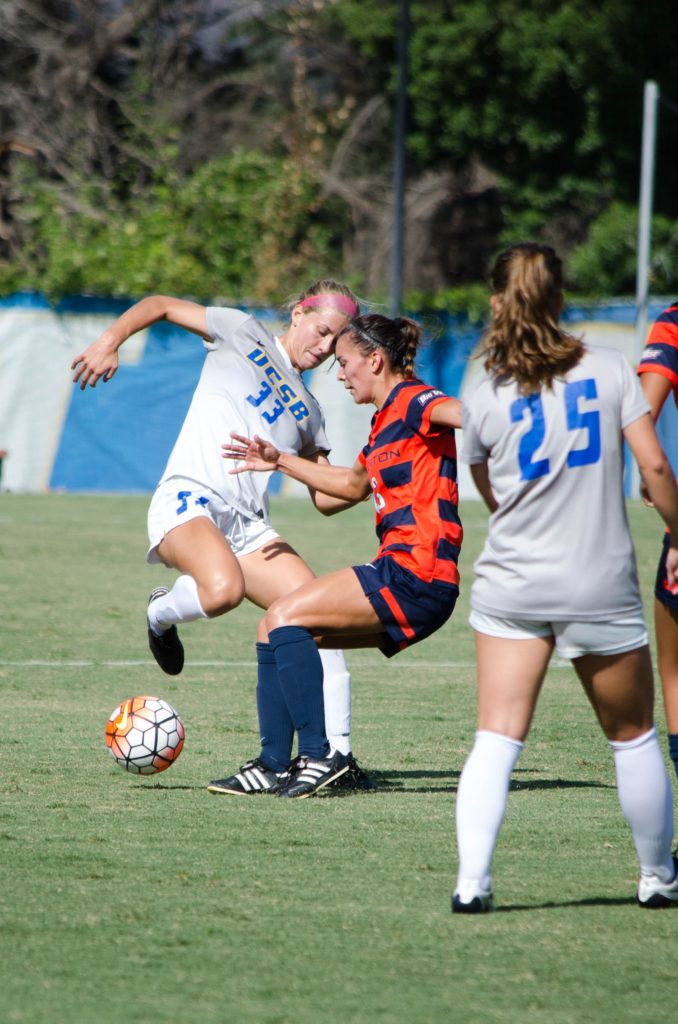 The Gauchos are currently 11-4-2 overall with a Big West record of 2-3-1. This record ties UCSB for fourth place in the conference standings alongside Hawaii and upcoming opponent UC Davis. Davis is 6-8-3 and 2-3-1 in conference play. Long Beach State sits just above the Gauchos and Aggies in third place with an overall record of 7-6-3 and a conference record of 3-1-2.

Although the Gauchos have struggled lately, they have seen much success over the course of the season. Aside from starting the season with an incredible eight-game winning streak that matched the longest for UCSB women’s soccer in 20 years, they have also scored an impressive total of 28 goals on the year.

UCSB will look to ignite that same spark in hopes of a strong finish to its season in addition to attempting to lock a playoff spot. In order to continue that success, the Gauchos will need to rely on the backbone of their team: their defense.

While the numbers prove that UCSB has been more than capable of scoring goals, being able to hold other teams to a limited amount of scoring opportunities is just as important when it comes to the team’s game plan.

“Keeping opposing teams to zero or one goal takes a lot of pressure off of our attackers,” Head Coach Paul Stumpf said. “Now, to win a game, we might only need one or two goals of our own. Our team defending has been a significant part of our success this year.”

Gaucho starting sophomore goalkeeper Brittney Rogers has been a huge asset to her team this year. Collecting 38 saves and six shutouts, she has played a valuable and effective role in the team’s defense. Without her achievements this year in protecting the net, the Gauchos would not likely hold the successful winning record they currently possess.

Leading UCSB’s charge in setting up these attackers with scores has been sophomore midfielder Maddie Gibson, who leads the team with five assists.

The UC Davis Aggies currently sit with the Gauchos in fourth place in the standings; however, UCSB leads them in multiple offensive categories. In the key category of goals scored, the Gauchos have tallied 28 this season to the Aggies’ 21. Another key category is corner kicks where Davis has earned 83 while the Gauchos have put together 111.

However, as with every game, it will be important for UCSB to go into this match treating the Aggies as a tough competitor capable of defeating any team.

“It would be a mistake by our players to think we can just show up and win. [UC Davis] are going to be tough no matter what their record is,” Stumpf said.

With that being said, there are a number of impact players on the UC Davis roster that cannot be overlooked.

In the front of the field, the veteran duo of senior forwards Celina Minissian and Rachel Ahr has led UC Davis on offense as both have currently scored four goals each. Also contributing are sophomore forward Crystal Crump and freshman forward Nicole Carson, as both lead the team with three assists each.

Sophomore Alexis Smith has been the permanent goalkeeper for the Aggies as she has played every game from start to finish, collecting a total of 65 saves and five shutouts.

Long Beach State will make for a more challenging opponent as it sits one place above the Gauchos in the Big West standings. The 49ers have scored a total of 25 goals this season and have put together 98 corner kicks.

Most notably, Long Beach’s defense has been stellar, allowing only 16 goals.

Junior forward Ashley Gonzales stands out on the roster with her team-high eight goals this season. She has had a total of 21 shots on goal and three assists. Gonzales ranks among the program’s career leaders with 17 goals and 10 game winners. Senior midfielder Mimi Rangel will be another tough competitor having scored four goals this season along with four assists.

Senior goalkeeper Ashton McKeown holds the 49ers down in the goalie box with five shutouts and 54 saves.

The Gauchos will face the UC Davis Aggies at home at Harder Stadium on Thursday, Oct. 27 at 7 p.m., then will be on the road to take on the Long Beach State 49ers on Sunday, Oct. 30 at 2 p.m. at George Allen Field.

A version of this article appeared on page 8 of October 27, 2016’s print edition of the Daily Nexus.

The Signs as Different Features of Your Hot Professor

Their khaki pants with at least six pockets

Their slowly fading will to live after grading your exam

Their mistimed jokes that flop every lecture