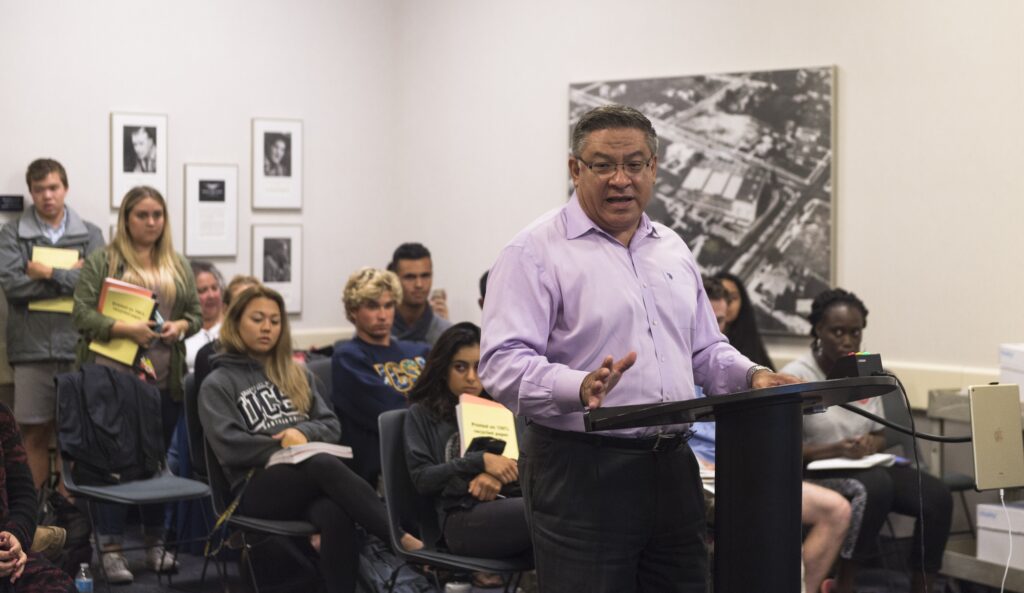 Salud Carbajal, Democratic candidate for the 24th Congressional District, spoke Wednesday at the Associated Students Senate meeting, outlining his vision for the future of the district.

The former Gaucho feels like he has “come full circle” speaking to the students of UCSB, he said. Despite speaking for less than 10 minutes, he spoke about making college more affordable, standing up for LGBTQ, reproductive and minority rights and climate change.

“We need to make sure that students that are graduating from college don’t end up with a massive amount of student debt. Banks should not be profiting off the backs of those wanting to get a higher education,” Carbajal said as he expressed his vision to reduce interest rates on student loans.

Carbajal, who was recently endorsed by Planned Parenthood, spoke at length about how the United States must continue to fight toward equality for women and all people.

“I will do everything possible to champion legislation to end discrimination against the LGBTQ community,” he said, urging students to understand its importance although Obergefell v. Hodges Supreme Court decision made same-sex marriage a constitutional right.

He continued by pledging to support the Paycheck Fairness Act as an effort to close the gender gap. Earlier this week, Carbajal received the endorsement from President Obama, who signed the Lilly Ledbetter Fair Pay Act that also combatted the gender pay gap.

“Women today only get 78 cents per dollar earned by their male counterparts. Women need to get paid the same as men; we need to make great strides to close the gender pay gap,” Carbajal said.

Continuing his speech on the pursuit of equality, Carbajal argued that the Citizens United Supreme Court decision is a threat to our democracy and wants to overturn it due to the power that it gives to Super PACs in funding elections.

When asked how he reconciles his position on Citizens United with his receiving $2.5 million in Super PAC donations, Carbajal admitted that he as a candidate has no control over who donates to his campaign but pointed out that he was endorsed by a national nonprofit organization whose sole purpose it is to overturn the court ruling.

On the issue of climate change, Carbajal called it the “most important issue of our time” and stated that we need to move toward renewable energy and stop offshore oil drilling, adding that fracking “brings danger to our communities.”

Carbajal ended by publicly endorsing Measures E and F, which will be on the November ballot. If passed, these two measures would give Isla Vista self-governance through the creation of a Community Services District.

Carbajal is one of only six California Democratic congressional candidates that President Obama endorsed of approximately 150 around the country.