The Daily Nexus
Music
Treasure Island Fest Rains on Own Parade
October 20, 2016 at 11:19 am by Ateken Abla 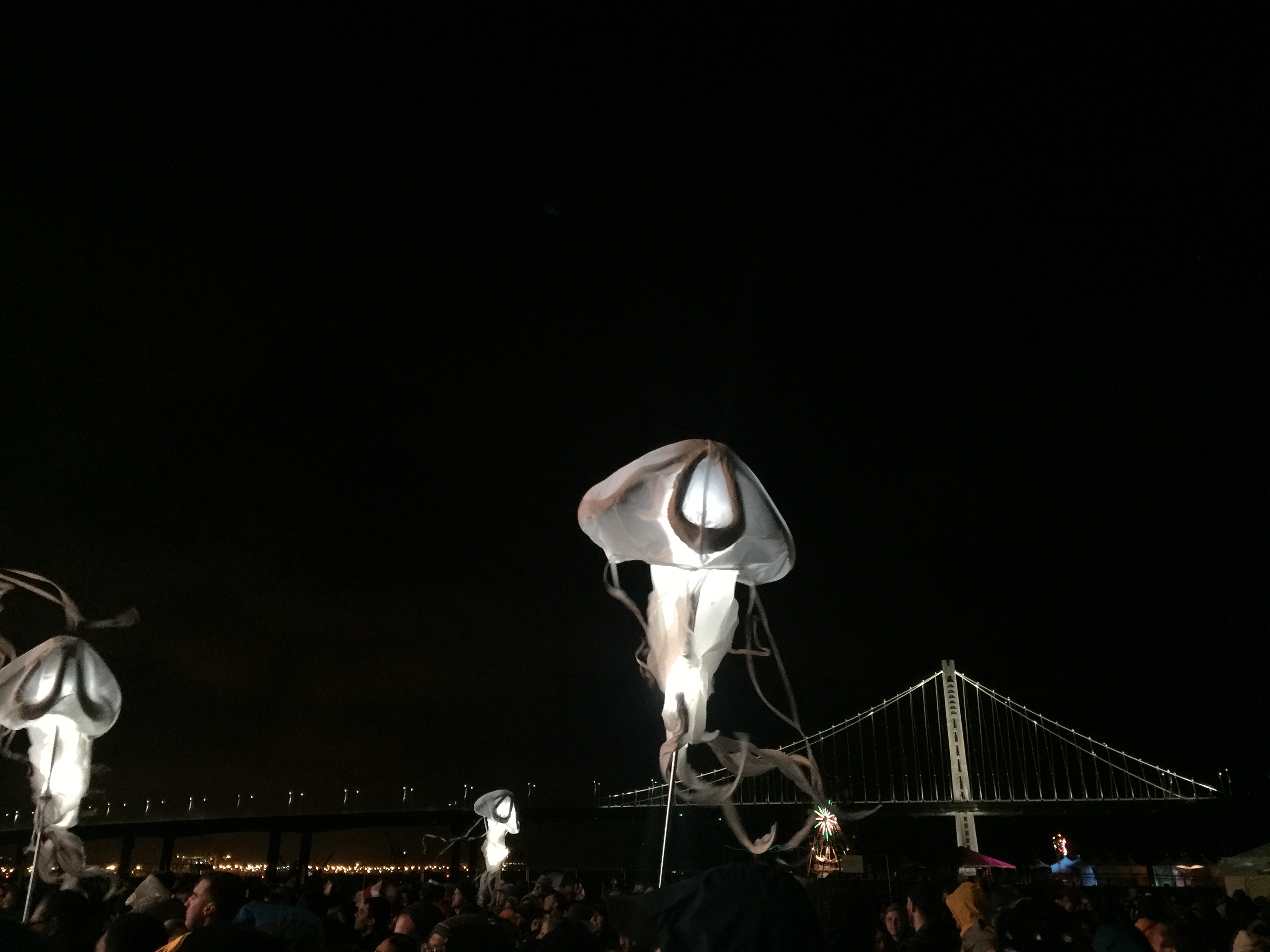 Going into the weekend, Treasure Island Music Festival-goers knew to be prepared for the weather. But as they arrived, ready in their rain boots and warm layers, they found that Treasure Island was the grossly unprepared one. The festival was continuously way behind schedule and even canceled artists minutes before they were about to come on. Here’s the low-down on some of the ones that actually ended up playing:

After a wait of three hours — not 30 minutes of which passed by under a torrential downpour — Young Thug finally took the stage. He apologized for travel complications and quickly started his set. The crowd was very low-energy; after waiting three hours, it was to be expected. Throughout his entire set, Thug would try to hype up the crowd and ask, “If you’re ready to turn up, say, ‘hell yeah,’” but the “hell yeahs” were pretty sad. However, this didn’t last for long: Toward the end, when he started singing “Pick up the Phone,” the crowd’s enthusiasm was back. You could hear people singing and dancing along, with various shouts of, “It’s LIT!” during the song. Despite the rough start, Young Thug definitely put everyone back in a good mood by the end.

Glass Animals put on a solid performance despite the short amount of time they had on stage. The creepy, cool voice of Dave Bayley spread through the crowd and gave everyone chills during “Toes.” The chilly, windy, post-rain atmosphere matched the vibes of Glass Animals’s set. Playing songs from both Zaba and How to Be a Human Being, the set combined older favorites with newer jams. “Cane Shuga” — a song from their recent album that isn’t very popular, what with its simple synth background beats — stood out like a hidden gem. Finally, Glass Animals ended with a favorite: “Gooey.” Everyone in the crowd was singing and moving to the catchy, buzzing tune.

Zhu is a performer who is never afraid to change it up. At his TIMF set, one of his band members began with a guitar solo of “The Star-Spangled Banner” with a huge projected Zhu flag on the back screen. This differed from his performance at Coachella, which was a bit more mysterious with lots of fog and smoke. Both of these performances, however, show Zhu to be an artist who values production as much as music. Every one of Zhu’s intros and outros was remixed in new and unexpected ways. Many of the songs he played were accompanied by energetic guitar and saxophone solos, and he also sang all of his songs live while DJing. His voice, a high falsetto, only further adds to his mysterious, sensual aesthetic. The lights flashed black, white and red as the screen depicted hints of a cityscape. As the crowd listened, the combination of vocals and the dark visuals added to Zhu’s enigmatic persona. In addition, attendees who’d caught him just a few days before on his tour confirmed that his Treasure Island set was completely different. Zhu is always two steps ahead of the crowd. Toward the end of his set, he started playing “One Minute to Midnight,” but just as the crowd started anticipating the song, he immediately transitioned to one of his more hype tracks, “Hold Up Wait a Minute.” Zhu continues to push live mixing to its boundaries. 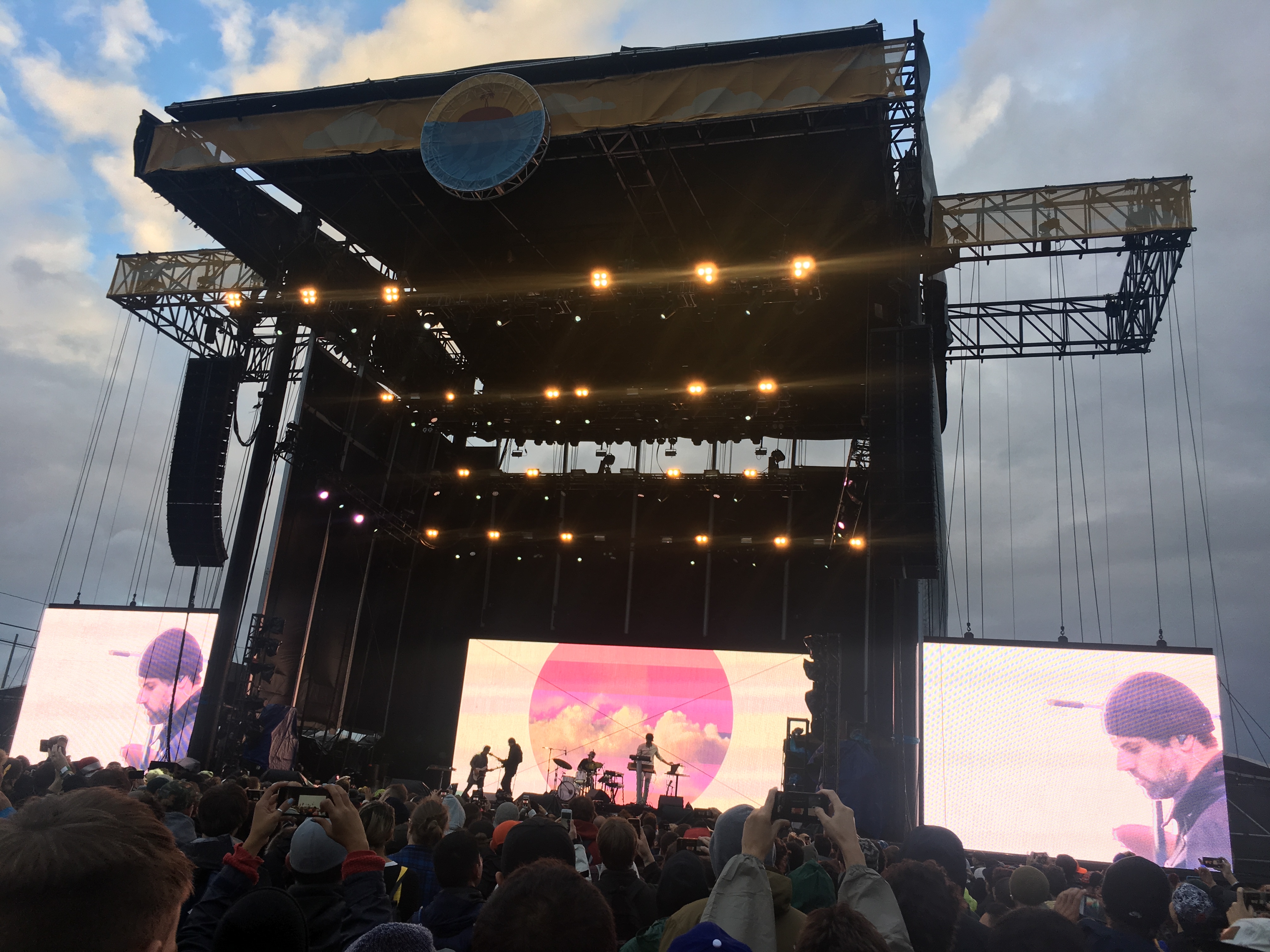 Tycho recently dropped a new album, Epoch. His live set, which was during the late afternoon, was a bit more mellow of an experience than many of the other acts. But don’t confuse mellow for boring; combined with his visuals, which comprised of Grand-Canyon-like natural footage superimposed with funky oranges and pinks, his sound seemed to take you away to another place. Although he played specific cuts from all of his albums, his entire set seemed like one connected experience with seamless transitions. 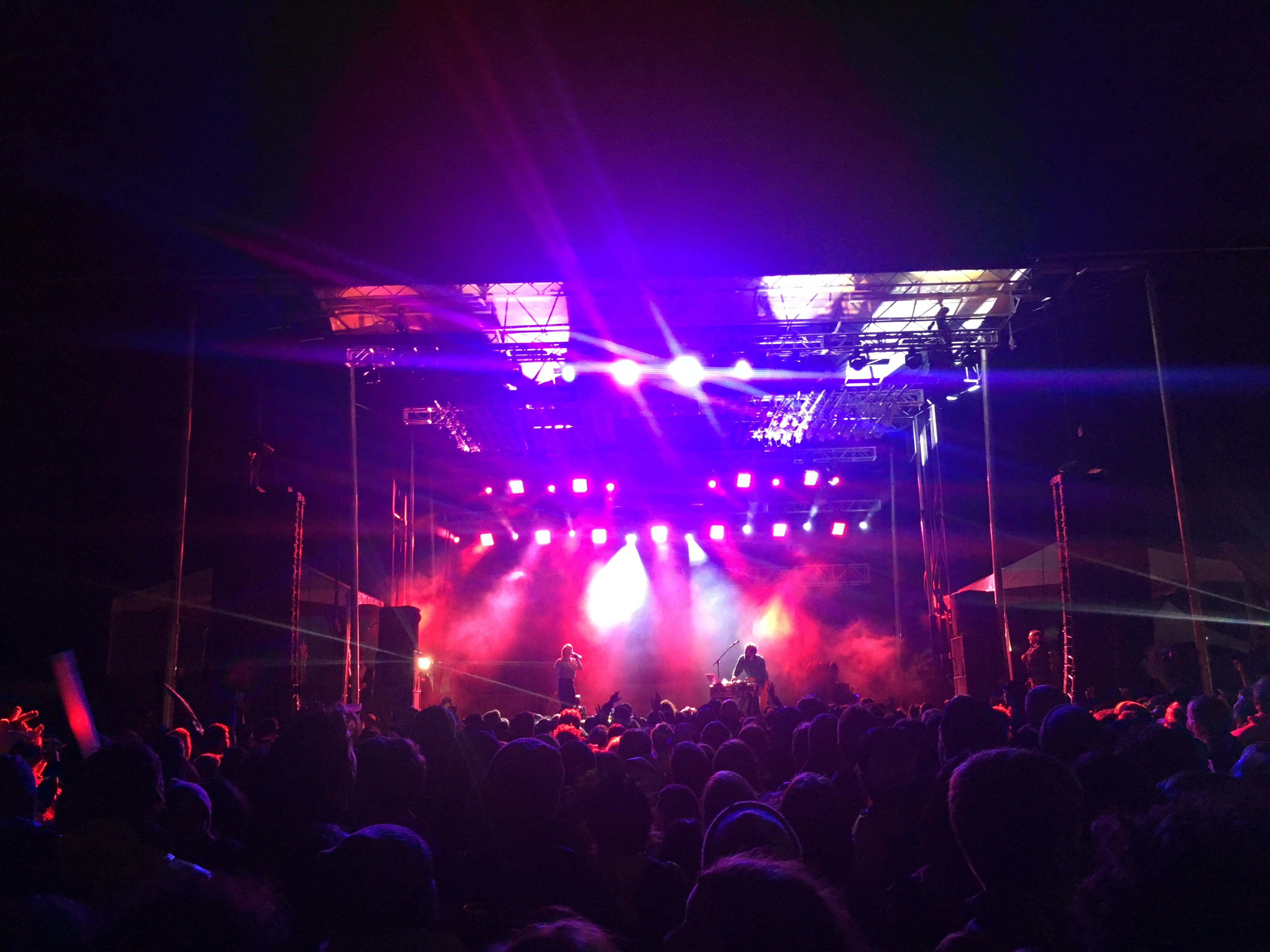 Thought to be just a one-album project, Sylvan Esso recently released a single, “Radio.” This surprised many fans, giving them hope that they would release a new album. The DJ-singer duo who rarely tour was one of the more special performances of the weekend. Nick Sanborn and Amelia Meath took the stage and announced that this would be their last performance before they dropped their next album, and excitement ensued. Amelia captivated the audience with her crazy dance moves and crazy-good voice. At this point of the evening on the second night, there had already been so much rain that the mud covered people’s shoes. But it didn’t matter: When she sang  “H.S.K.T.,” everyone in the crowd was dancing and pointing to their heads, shoulders, knees and toes as she sang the chorus.

This was Treasure Island’s 10th Anniversary and last year on San Francisco Bay’s Treasure Island. The eclectic lineup and their talented performances were the main attraction. But while the performances themselves were phenomenal, the music festival was supremely disorganized. Some of the main acts during the evening like Duke Dumont, Flight Facilities and James Blake were cancelled due to rain or wind. Treasure Island advertised as being a rain-or-shine festivalbut could not deliver. Had they planned the necessary precautions for the weather or even communicated better about set times and artist changes, the festival would have run much more smoothly.