The Daily Nexus
Water Polo
No. 7 UCSB Hosting LBSU in Second Ever Night Game
October 20, 2016 at 5:07 am by Jorge Mercado 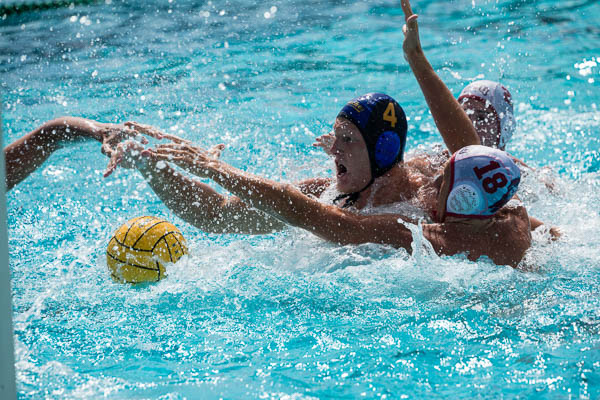 After winning three of five games in four days last week, the No. 7 UCSB men’s water polo team is ready to take on No. 6 Long Beach State in what should be a great primetime showdown between two conference foes.

The Gauchos, winners of five of their last eight matches, host their opponents boasting an 11-6 overall record, 1-0 in Golden Coast play. The 49ers take on their GCC foe with an 11-5 record on the campaign and a perfect 1-0 start as well after defeating Pepperdine at home last week. Like Santa Barbara, Long Beach State also decided to leave the MPSF and join the newly created Golden Coast Conference for a chance at capturing a conference title.

Since starting the season 6-0, the Beach has slowed down as of late, posting a 5-5 record over the last 10 matches with all five losses coming against higher-ranked teams.

UCSB and LBSU have met once this season, at the Mountain Pacific Invitational, in a match that ultimately went the 49ers’ way as they cruised to a solid 9-6 victory.
At the time, Santa Barbara was ranked No. 6 in the country while the No. 7 spot belonged to Long Beach State.

The two positions flipped after the loss and have stayed that way ever since. Knowing this, not only is this a match for conference supremacy but also for bragging rights as to who can rightfully claim that No. 6 spot.

As this match will be played at home for the Gauchos and will be their second night game this season, they will have a great mindset knowing they will have a rambunctious, energetic crowd behind them like the one in attendance last week against San Jose State, their conference opener.

However, facing the Spartans and facing the 49ers are two different stories. Even before this season, LBSU and UCSB have been conference rivals during their time in the MPSF. These two programs have played a total of 118 matches with the majority of the wins going to the Beach, who hold a 60-58 record all-time.

The talent level Santa Barbara will be facing in this conference match will be much different, something it knows all to well after its last meeting just a couple of weeks ago.

In that match, attacker Nolan McConnell led all scorers with four goals, all in the first half for Long Beach State. By the end of the first frame, the senior already tallied a hat trick. This season the senior ranks third in the GCC in goals with 31, best on his team, and leads his team in points with 33.

In the cage for the Beach, sophomore Thomas Freeman has excelled; he currently has the best save percentage of any player with two or more starts in the Golden Coast at .667, while his goals allowed per game is also tops with six scores per game. His 97 saves are good for third best in the conference.

Facing such a tough foe, the Gauchos will need their best players to shine in their primetime showdown. One of the players they’re counting on is senior utility Reed Cotterill. Two weeks ago, he was honored with the inaugural Golden Coast Conference Offensive Player of the Week after four goals against No. 8 Pepperdine. This season, Cotterill leads his team in steals (12), goals scored (23) and points (28).

Other notable players include junior attacker Shane Hauschild, who has been an offensive force this season, scoring 17 goals and tacking on nine assists for a total of 26 points, second best on the team. Sophomore driver Boris Jovanovic has also been solid, scoring 19 goals this season — second best on the squad — and netting a hat-trick against UCLA last week.

In what turned out to be a dominant double header Saturday for the Gauchos as they defeated La Verne and Whittier College by a combined score of 31-5, freshman Ivan Gvozdanovic and Connor Wilde finished that day with four goals apiece.

Liam Lenihan has also been great in the cage for UCSB. The senior goalkeeper was solid last week, allowing just eight goals in three matches against San Jose State, La Verne and Whittier College. His 79 total saves are good enough for fourth best in the conference.

With their second conference night game underway tonight, there is no way the Gauchos aren’t super stoked for this game. Last week Campus Pool was a packed house, and the same is expected tonight as the game has much more at stake and it is with a much more familiar opponent.