The Daily Nexus
News
Activists Rally Against Recent Act of Violence in LGBTQ+ Community
October 20, 2016 at 12:20 pm by Josie Baez and Matthew Danaher 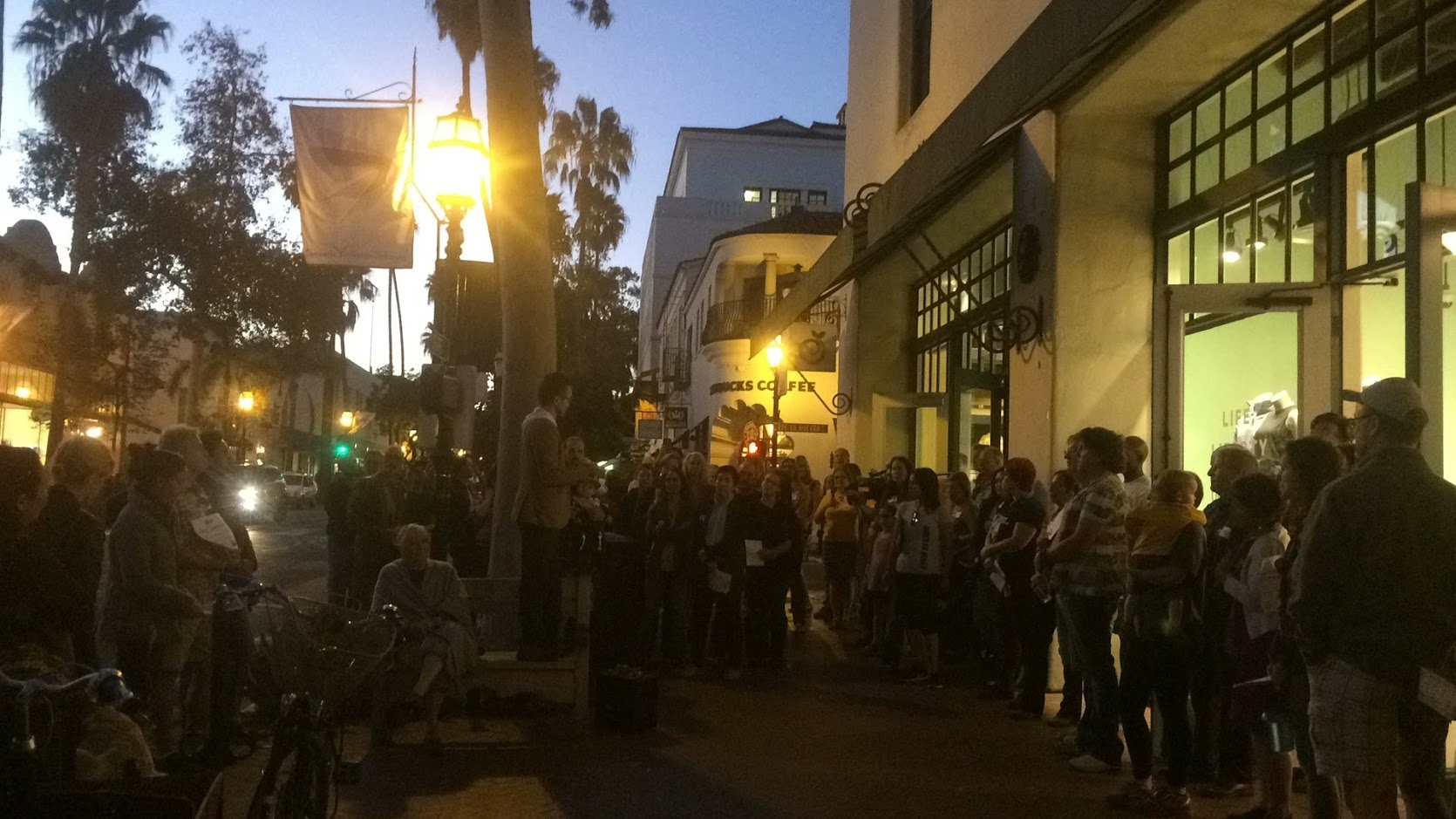 A group of activists proudly wearing “No Hate on State” stickers and “Just Be You” bracelets gathered Tuesday in De La Guerra Plaza to address a recent act of violence against a gay couple in Santa Barbara.

Richard Schiwietz and Saul Lerma were walking down the 700 block of State Street on Oct. 4 when a stranger began verbally abusing Schiwietz.

The stranger approached the two men and yelled vulgarities at Schiwietz after seeing him arm-in-arm with Lerma. When Schiwietz told him to stop, the stranger proceeded to physically attack Schiwietz, punching the side of his head and running away.

The police apprehended the man after Schiwietz and Lerma chased him down State Street and identified him as 54-year-old John Savala. Santa Barbara District Attorney Joyce Dudley intends to prosecute the incident as a hate crime, the Santa Barbara Independent reported Tuesday. If successful, the decision would be the first hate crime charge in Santa Barbara since 2011.

After the incident, Schiwietz and Lerma went to the Pacific Pride Foundation to share their story with Patrick Lyra Kearns, outreach advocate for the organization. Their discussion sparked the idea for Tuesday’s gathering.

Members of the Pacific Pride Foundation, the Live Oak Ministry and many supporters of the LGBTQ+ community came together in De La Guerra Plaza for a total of approximately 60 people.

Lerma stood by Schiwietz’s side as he gave his speech, still visibly shaken by the encounter. Schiwietz said he had hoped bullying would come to an end as an adult, “yet in my own beautiful adopted home of Santa Barbara years later I am still called names as I walk down my own street.”

Also in attendance was State Senator Hannah-Beth Jackson, who said she was disappointed and shocked by the incident. She addressed the hate crime and spoke about her hope for change in Santa Barbara regarding the safety of the LGBTQ+ community.

“As human beings, we are all entitled to dignity and respect and the opportunity to live safely and happily in a community with the people we love,” she said.

Tania Israel, UCSB professor of feminist studies, attended the gathering as a member of the Pacific Pride Foundation. Israel and her colleagues have been gathering information for several years to increase the safety of LGBTQ+ communities in Santa Barbara.

After conducting surveys with community members, Pacific Pride found the top priority of LGBTQ+ residents to be freedom from harassment and violence. They communicated the findings with Cam Sanchez, former chief of the Santa Barbara Police Department, which resulted in mandatory five-hour trainings for every sworn officer in Santa Barbara.

After the initial gathering at De La Guerra Plaza, the group walked to the location of the incident, as “People Are People” by Depeche Mode played. The song discusses violence and hatred toward those who are different from us and holds great meaning to Lerma and Schiwietz.

Kearns encouraged everyone to hand out flyers about the hate crime to those passing by and to get the message out. The event ended with a moment of silence not just for the couple, but for anyone who had ever been the target of a hate crime.

The purpose of the movement was to show solidarity with those who have experienced hate rather than dwell in angry sentiment, Kearns said.

“We are making huge progress in our schools and businesses and helping agencies around town, and there’s a bit of an underbelly in our county and nationally,” he said. “We’ve made strides, but the ignorance is now more visible as a result, so we really need to make it clear that this is here and to start dealing with these issues. We have to start locally.”

Hi folks. This is Patrick Lyra Kearns here from PPF. Please note that, as I shared over the phone, I use they/them pronouns and identify as transgender (agender) and queer. All pronouns in reference to me should be they or them (singular). Thank you! Great article otherwise.