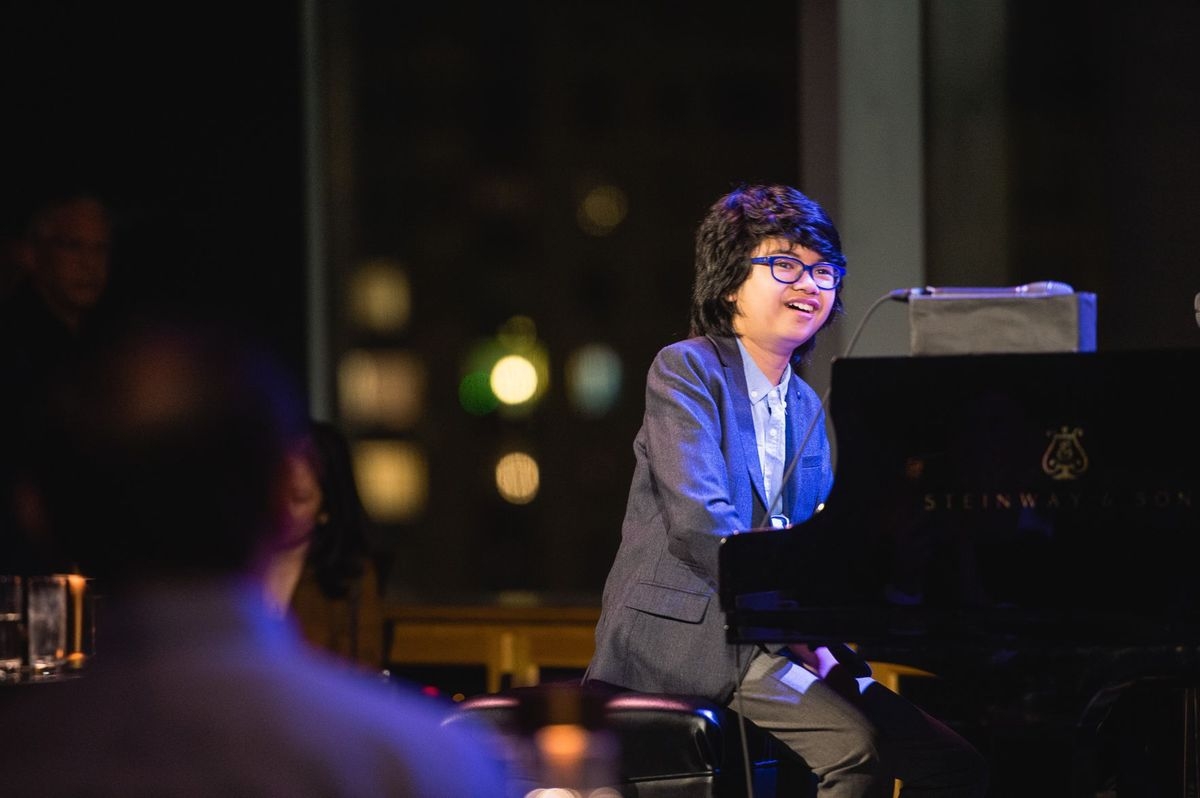 You might assume that when a 13-year-old piano prodigy is coming to play at Campbell Hall, he’d be accompanied by other preteens; that it would be a concert you could hear at a middle school recital.

The Joey Alexander Trio was most definitely not that.

In fact, the group’s Sunday night concert was as close to a Carnegie Hall performance as you can get in Santa Barbara.

Born on the island of Bali, Indonesia, Alexander first encountered a keyboard at age six and immediately knew piano was his calling, jazz piano in particular. Not only could he pick up virtually any blues composition by ear, but he could also improvise with a level of experience far beyond his years. In 2014 at the young age of 11, the musical genius was discovered by jazz legend Wynton Marsalis and flown out to New York for Marsalis’s all-star jazz concert at Lincoln Center. From there, his career took off. He’s released two solo albums and been nominated for two Grammys in just the past two years.

This is Alexander’s first time on the road. He was accompanied by Juilliard graduate and two-time Grammy winner Ulysses Owen, Jr. on the drums and Berklee College of Music alum Reuben Rogers on upright bass. Celesta M. Billeci, executive director of the Arts & Lectures program, introduced the band by simply stating, “I don’t even know how to describe what you’re about to see tonight except: Wow.”

Greeted with tremendous applause, Alexander opened the show with a classic by John Coltrane called “Calm Down” followed by several original compositions. He received continuous encouragement from bass player Rogers, who periodically yelled out a supportive “yeah!” The trio as a whole was tremendously in sync; Alexander thrives in the syncopated rhythms of jazz. He studied classical music as a child, like the works of Mozart and Tchaikovsky, but always wanted to elaborate on it. Classical music is supposed to be played as written, though; you’re not supposed to embellish. Jazz, however, allows the freedom to express yourself, unlike classical composition, and you can tell it’s what the young virtuoso is meant to be playing.

His bandmates perfectly complemented him with many impressive solos displaying their remarkable skills on their respective instruments. If you think Miles Teller was good in “Whiplash,” you obviously haven’t seen Owen, Jr. play yet. His hands moved so quickly they completely blurred. Rogers, the “jokester” of the gang according to Alexander, was having the time of his life on stage, yelling out and swaying with the music.

Now, if you like music — which I assume you do if you’re reading this article — you’ll like Alexander’s original compositions. They’re simply inspirational. It’s more than just genius in its arrangement, it’s the notion of a 13-year-old following his dream and truly succeeding. Every silence and pause was precise and intentional. It’s the kind of music that makes you feel deep down in your core. It makes you want to get out of your seat and cheer, cry and grin. Many audience members shook their heads in disbelief. After the first piece, the woman to my left let out a quiet “Wow,” one you could only hear if you were sitting directly next to her. Everyone was thinking the same thing.

After the show, Eleanor York was more than excited to share her thoughts about Alexander’s performance. “It was phenomenal. The way everyone played off of each other and with each other; it’s amazing for anyone, let alone a thirteen 13-year-old,” said York, who has followed Wynton Marsalis as a frequent patron of the Arts & Lectures events for years and knew when Joey got his endorsement he was someone to look out for. “It was just delicious.”

It’s hard to think of a word other than “adorable” to describe the pianist, but gifted will undoubtedly suffice. When he speaks, though he is not completely fluent in English, he is humble and compassionate. It reminds me of one of my favorite quotes by Hans Christian Andersen: “Where words fail, music speaks.” While Joey’s English may not be the best, he certainly makes up for it with his music. His sound and soul are much older than 13 years, and when he plays you forget about his age. This was evident in the two standing ovations he received.

I was left with only one question at the end of the night: is Joey good for a 13-year-old, or is he just good? I think it’s safe to say he’s just good.