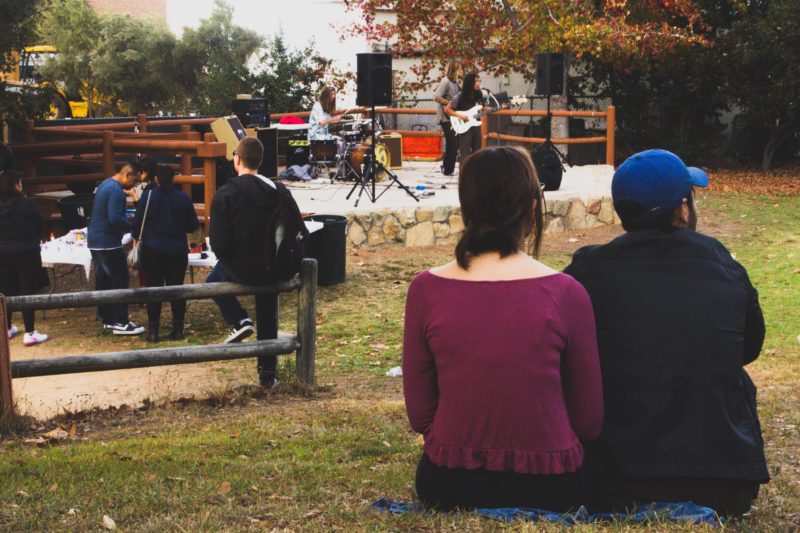 The pounding of drums and the wail of electric guitar echoed through the streets of Isla Vista on Friday, letting everyone know their favorite local bands were back in action. After the lull of summer, I.V. is again filled with students enjoying their community and ready to see some fun-filled live shows. With so many new and returning Isla Vista residents, the UCSB Community Housing Office, the Isla Vista Tenants Union and the Isla Vista Recreation and Parks District welcomed everyone with the Kick-Off Community Concert. The event served as a housing fair, educational center and venue for Isla Vista talent.

Anisq’oyo’ Park was set up as a maze of tables for the event. Representatives from many I.V. property providers were there offering cookies, lemonade and information about their properties. The Isla Vista Tenants Union sparked interest in passersby with games and prizes such as succulents and various home goods. A photo booth was nestled in the back of the park with fun hats and accessories. The atmosphere was festive and welcoming as people talked, ate and lounged on the grassy hill of the park’s amphitheater. What really drew the crowds, however, was the upbeat music permeating I.V.’s usual cacophony of sounds.

The Real Savage Henry was first to perform, reinstating their presence as a staple of the Isla Vista music scene. They brought their usual persona of fun and humor to the stage, wearing novelty accessories like a captain’s cap and a sailor hat. Wilder Kehke danced barefoot across the stage with his guitar and a carefree air of enjoyment. Even when many people were still roaming through the tables instead of sitting down to watch, the band remained lively and interactive with their initially small audience. They called out “Thank you!” to the applauding group at the very back of the amphitheater.

The band’s first few songs were mellow and jazzy, reminiscent of coffee-house tunes to match the laid-back atmosphere of the event. The songs were heavy on the drums, with drummer Will Hettel laying down a slow but strong beat that pounded through the space. The beginning of the set had an improvisational feel as each song had an occasional piano solo. Andrew Mac Innes mixed up his steady pops of keyboard with sweeping scales and fast trills of notes. Guitar solos were common as well as Kehke held out long, wavering notes combined with quick, short bursts of riffing.

John Pagliassotti’s steady bass transitioned into quick, accented strumming as the beat began to pick up. Quick bursts from Mac Innes’s keyboard mirrored the faster bass line. Hettel’s drumming grew louder and faster as Kehke’s hands flew up and down the guitar in frequent, wailing riffs. The pace never stayed too intense for too long, however, as the music quickly softened again to more mellow rhythms. Savage Henry’s atmospheric yet still distinct style at the event was a welcome sound for many after being away from Isla Vista all summer. 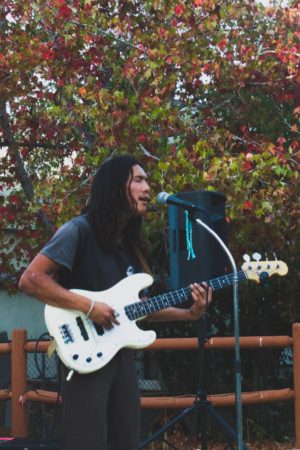 The next band to the stage was The NITWITS, giving event-goers a more rock-n-roll style to enjoy. Graham Bunce’s upbeat, catchy bass line got the audience bobbing their heads and swaying to the beat from the very beginning, as spontaneous bursts of drums and symbols added a flair of excited energy to the song. Drummer Ryan Lowe demonstrated his talent with seemingly no effort, his sticks flying across the drums and every beat strong and intense.

While singer and guitarist Bryan Rawn’s raspy voice was very characteristic of classic alternative rock, it was actually because he was under the weather, not imitating singers from the ‘90s. “As you can probably tell, I’m a little sick,” the singer apologized with a smile, “but you know what, we’re having fun!” The band had to stop one song because Rawn’s weakened voice wasn’t strong enough for the vocals, but they picked up again right away with another high-tempo number. Rawn hit impressive high notes with all his might and kept the song’s energy up with fast guitar strumming and stylish riffs.

For those who were new to the Isla Vista community or simply those who have been away for a while, the concert was an inclusive opportunity to learn about I.V. living while also getting a taste of the local talent. The organizations and bands of Isla Vista are here to kick off another great school year.