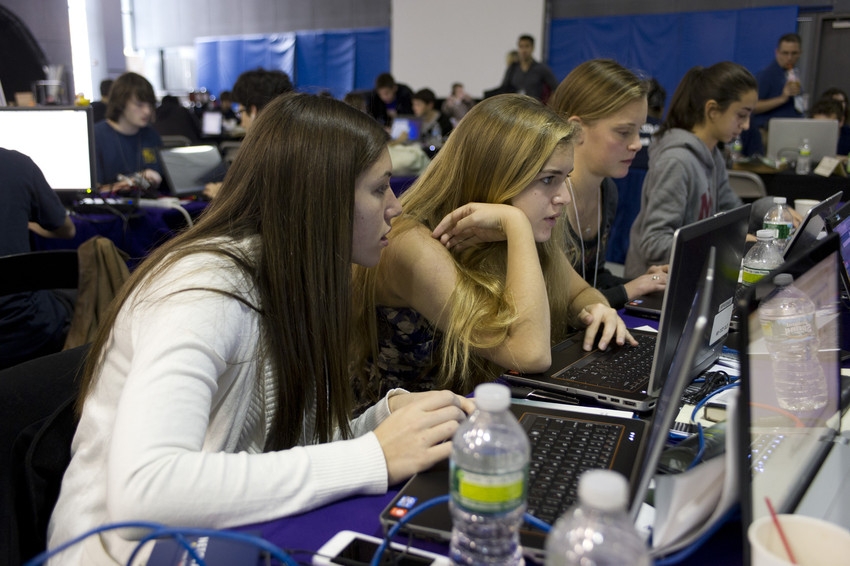 A group of hackers from UC Santa Barbara is one of the top teams to advance in a cyber security contest that began with 18,000 undergraduate students from around the world.

New York University’s Tandon School of Engineering hosted a 48-hour cyber security contest on Sept. 16 known as Capture The Flag (CTF), and UCSB’s team, Shellphish, came out in the top ten of all United States teams.

The group is comprised of Andrew Dutcher, Caitlin Scarberry and Brandon Dutcher. Originally a brainchild of UCSB Hacking Team, Shellphish was founded by UCSB professor Giovanni Vigna and is one of the oldest continually active CTF teams in existence.

“I’ve always been super into computers and started programming them around the age of 12 just making games and stuff,” Andrew Dutcher said of his start in hacking. Andrew Dutcher and his friends attended a hacking competition at Carnegie Mellon University during their junior year of high school, and he said, “we ended up winning, somehow.”

Yan Shoshitaishvili, a senior member of Shellphish and a computer science graduate student, had similar beginnings in hacking.

“I’ve been working with computers since I was eight, but got pulled into actual hacking in high school by hacking around with my friends,” he said. “I went to the DEFCON computer security conference held in Las Vegas every summer and was completely hooked after that.”

In CTF, students perform numerous challenges to test their cyber security skills. Easier challenges can take as little as 10 minutes, while more difficult tasks can take up to 18 hours.

CTF events occur all over the world every weekend, but Cyber Security Awareness Week (CSAW) is the largest student-run cyber security event in the nation.

Despite the seemingly daunting task of 48 hours of competition to solve intense cyber security challenges, the common sentiment among both organizers and participants of CSAW is that it’s a fun event for people interested in cyber security.

“CTF is really just a puzzle game for security professionals to practice their skills in a controlled and fun environment,” Andrew Dutcher said.

To expand the reach of the competition to gain worldwide impact, CSAW this year partnered with NYU Abu Dhabi and the Indian Institute of Technology Kanpur.

Nasir Memon, professor of computer science and engineering at NYU, founded the competition 13 years ago when cyber security was still a burgeoning field of work. He said that, today, young minds are needed to address the vulnerabilities in rapidly expanding technology.

“I think security is an interesting discipline, because it’s more than just technology,” Memon said. “It’s a psychological problem, a business problem, a policy problem, a legal problem. We need to have the right minds in the discipline.”

According to the NYU Tandon School of Engineering, there have been over one million cybersecurity job openings just this year.

While expansion of these skills may be key to finding work in the increasingly competitive job market, for the members of Shellphish, it’s just a fun way to hang out with friends while learning about hacking.

Christopher Thompson, third-year computer science major at NYU with a specialty in cyber security, is the lead organizer for the Capture The Flag event. He said it is “extremely important” for people to know that cyber security programs such as CSAW are making an effort.

“Going through this competition is the equivalent to earning a degree in computer security; having the CSAW name behind a person gives them a lot of validity,” Thompson said. “We’re trying to get companies to realize the talent that’s available while also giving people something to challenge themselves and have fun with.”

The 15 teams which have outlasted preliminary competitions will advance to finals in New York from Nov. 10-12.

When asked about Shellphish’s shot at winning CTF finals, Andrew Dutcher said they were “almost zero” due to the graduation of much of the original team. He said, however, that “regardless of if we win or not, the next step is to keep improving … There’s always room to grow and get better.”

Memon, too, is remaining optimistic about UCSB’s chances. “I think [UCSB] will do well,” he said. “You have a good team; you’ll place high.”

Correction: Shellphish placed in the top ten of United States teams, but did not receive first place.