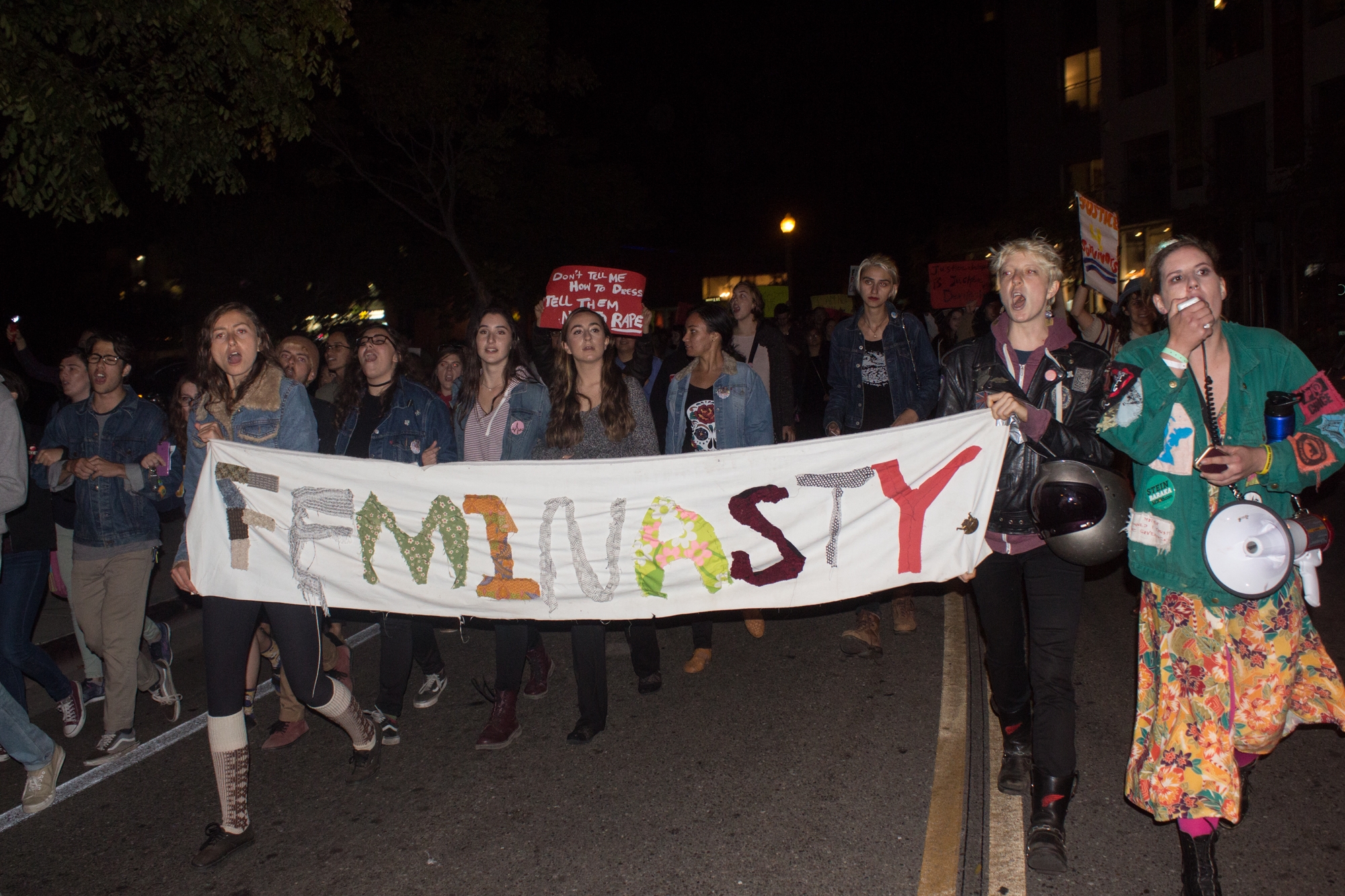 Kat Kepski (right) organized the protest after an incident in front of her home. Oliver Zuniga / Daily Nexus

A group of activists, known as the Feminasty Guardians, marched through Isla Vista Friday to  reach the scene of the altercation that inspired their protest against rape culture at UC Santa Barbara.

Katherine Kepski, the leader of the protest, encountered a woman outside her home on Sept. 16 who was being verbally abused by her boyfriend. The woman had allegedly been sexually assaulted by the man’s best friend while unconscious, and Kepski attempted to assist her.

The event featured a representative of the Santa Barbara Rape Crisis Center, members of the Student Activist Network and various members of UCSB fraternities and sororities.

Numbering over a hundred strong at the beginning of the event, the protest began at the Pardall Center with a speech by a Santa Barbara Rape Crisis Center advocate. She asked, “What can we do to make our streets feel safer?” and called on students to intervene, remain vocal and share their stories.

The congregation marched through the streets of I.V. starting on Pardall Road, rounding the loop past 7-Eleven and continuing through Del Playa Road.

Partygoers on Del Playa issued a mixed response to the protesters, as some fervently joined in from their backyard chanting “2, 4, 6, 8, stop the violence, stop the rape” or “hey hey, ho ho, the patriarchy has got to go,” while others tepidly mocked the display, adding unrelated quips about party culture.

Regardless, all eyes on Del Playa were locked on the protest, with phones up documenting a crowd which grew to over 150 protesters of mixed gender, identity and race. 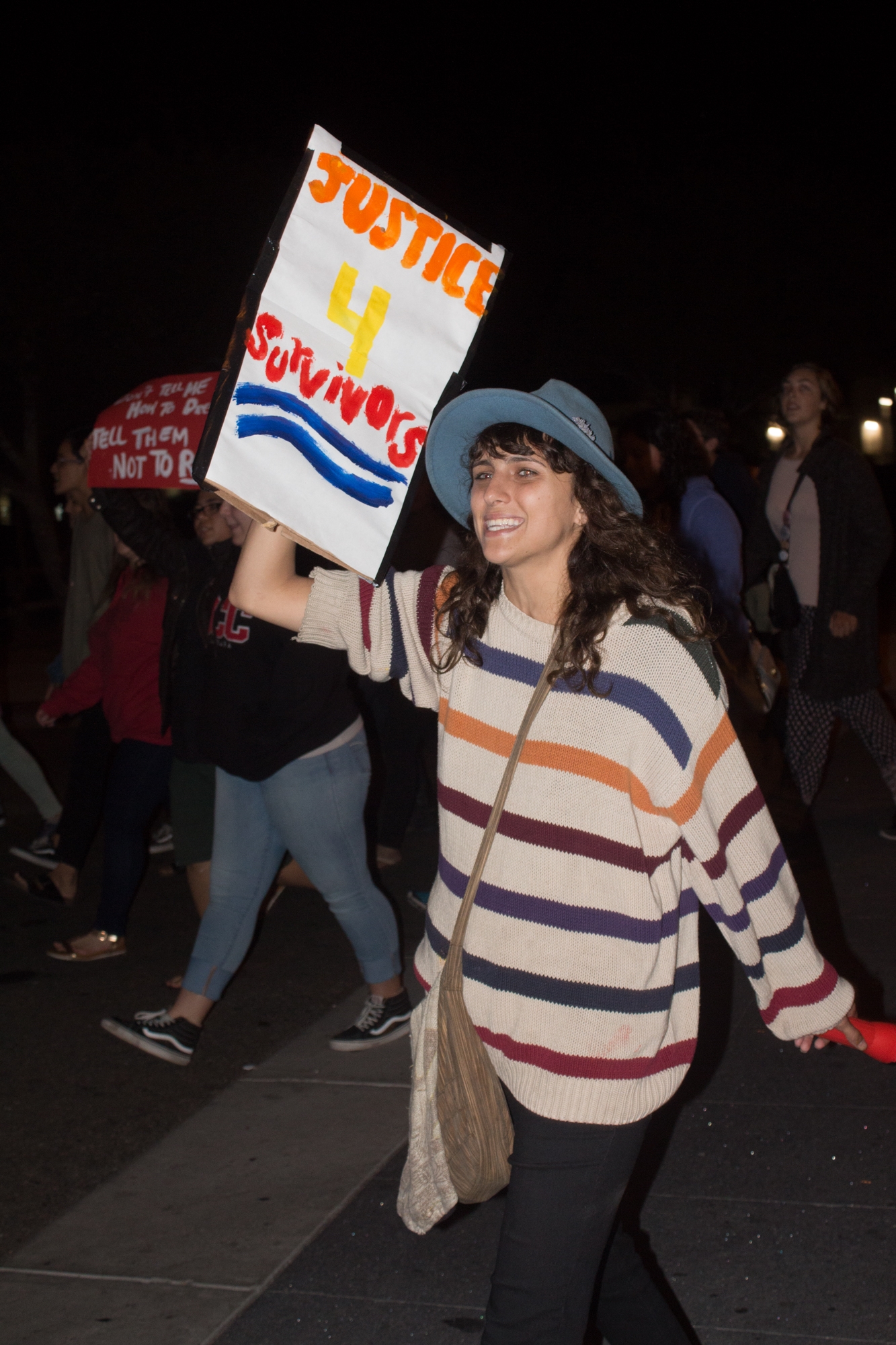 The marching stopped again at the end of DP where speaker Veronica Mandujano, a fourth-year black studies and chicano studies double major, spoke about the negative environment societal patriarchy has created for many women.

Mandujano called for “a reimagined and redefined feminism,” saying that male-dominated institutions have failed to create space and freedom for women.

Speaking to the growing crowd, she said, “We must be extra critical of our liberation politics and what we are passing on to the next generation.

“If your feminism is non-inclusive and is not intersectional, then it is not enough,” she said.

To the music of a guitarist singing to the crowd from a house on Del Playa, the protesters continued down the street chanting “Ni putas ni santas, Sólo mujeres”/ “Not sluts or saints, just women.”

“If your feminism is non-inclusive and is not intersectional, then it is not enough.”

The crowd ended their march in front of Kepski’s house on Sabado Tarde Road. A woman with the Feminasty Guardians spoke about her enlightening experience in coming out about her sexuality and the aggression she found fighting against it. Kepski brought up Eric Daniel Villalobos, a representative from the Student Activist Network.

Villalobos explained that the Student Activist Network is a new group on campus dedicated to promoting activism and that they helped organize speakers for this event, plan its route and inform possible participants and onlookers.

The Rapid Response Network, he added, is a service that will notify students about events regarding “struggles of racial justice, environmental degradation, discrimination against the LGBTQ community and issues of immigration.”

The march ended with a final statement from Kepski.

“We have to continue this conversation. This is just the beginning”.

Though the march had ended, a group of at least 20 students continued chanting back through Del Playa Drive to Pardall Road, continuing to spread their message. 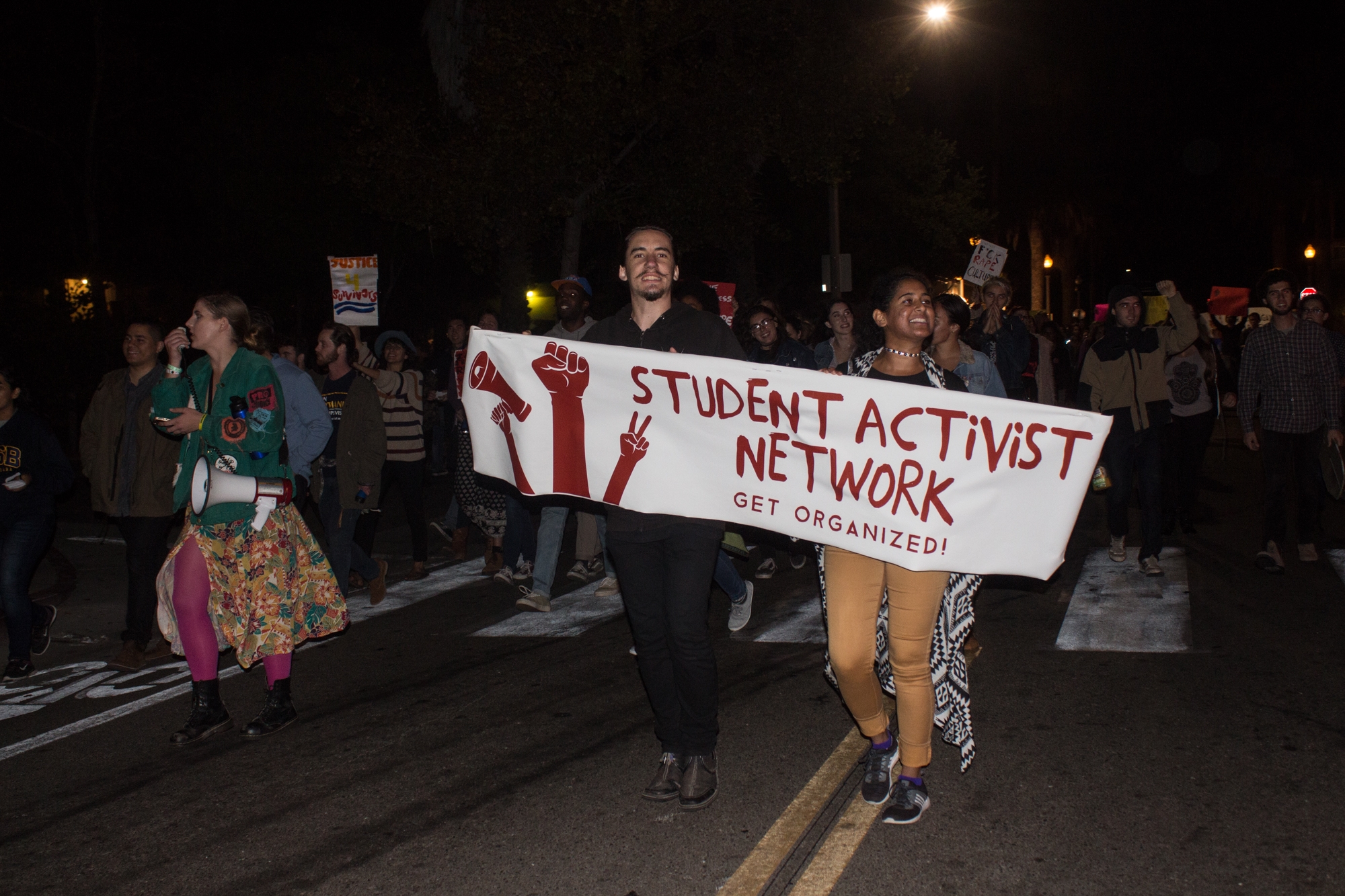 It’s sad to see the Daily Nexus fall this far. Firstly, there wasn’t 100 people, that’s a stretch. The event organizer did all this as an attempt to shame her neighbors into behaving how she liked, which is just manipulative and wrong no matter the reason. It’s sorrowing to think that people will read this article and take it all as absolute gospel and think of this event as a noble crusade when the reality of the situation is the complete opposite. Ashamed of the apparent bias riddling the DN.

The DN is doing what it was always meant to and reporting on important events involving UC Santa Barbara students. While it’s important for the newspaper to get constructive criticism to improve, there’s a difference between constructive and disrespectful. If you don’t agree with the article there are different ways to go about it than tearing students’ hard work down. That doesn’t mean your opinion is wrong by any means – it’s your opinion after all. There are just more productive ways to share it.

What are you talking about? She wasn’t even out of line with her criticism, just blunt. Stop tone policing. I’m sure people could say “there are more productive ways to share your opinion” to the obnoxious crowd described in the article that blocked the road on Friday night?

“Feminasty” is more accurate than they probably intended. How about instead of being nasty, we be nice!

Practice what you preach.

Nice feminist is an oxymoron because feminism is sociopolitical cancer

“What can we do to make our streets feel safer?” – This is my main issue with modern feminism, note the use of the word “feel”. Almost every other social science has adopted quantitative methods and has benefited immensely from it. However, these feminists are not concerned with data, only feelings, and their movements will suffer immense opportunity costs for it. The question they should be asking is “What are the commonalities between societies with the empirically lowest prevalence of crimes against women and if these features are causally related to the relatively low prevalence of crimes against women, in… Read more »

Better to read Professing Feminism: Cautionary Tales from the Strange World of Women’s Studies, Lying in a Room of their Own or or Who Stole Feminism than to enter the creepy coven at the social science cesspool by the sea.

I’m totally in support of your goals of this protest but shouldn’t you have done more to protect the privacy of the girl who “inspired” this whole event? I mean if everyone know she’s one of your neighbors it seems to put her in the spotlight without her consent.

But then Katherine Kepski wouldn’t have been able to have the spotlight on her? Don’t you realize its more about feeding the feminists’ ego than actually trying to make things better for victims?

This event was a complete joke. Props to the drunk guy who was trolling these idiots by jumping up and down, screaming at the top of his lungs, “RAPE IS BAD! RAPE IS BAD!” It was hysterical, and it highlighted just how pointless and foolish this exercise was. You’re not going to end “rape culture” by blocking streets, doing silly/hackneyed chants, and otherwise just being deliberately obnoxious. Feminasty Guardians are attention seeking posers, nothing more