The Daily Nexus
News
Takeaways from the Third District Supervisor Debate
October 14, 2016 at 1:22 am by Josh Ortiz and Junho Jeon 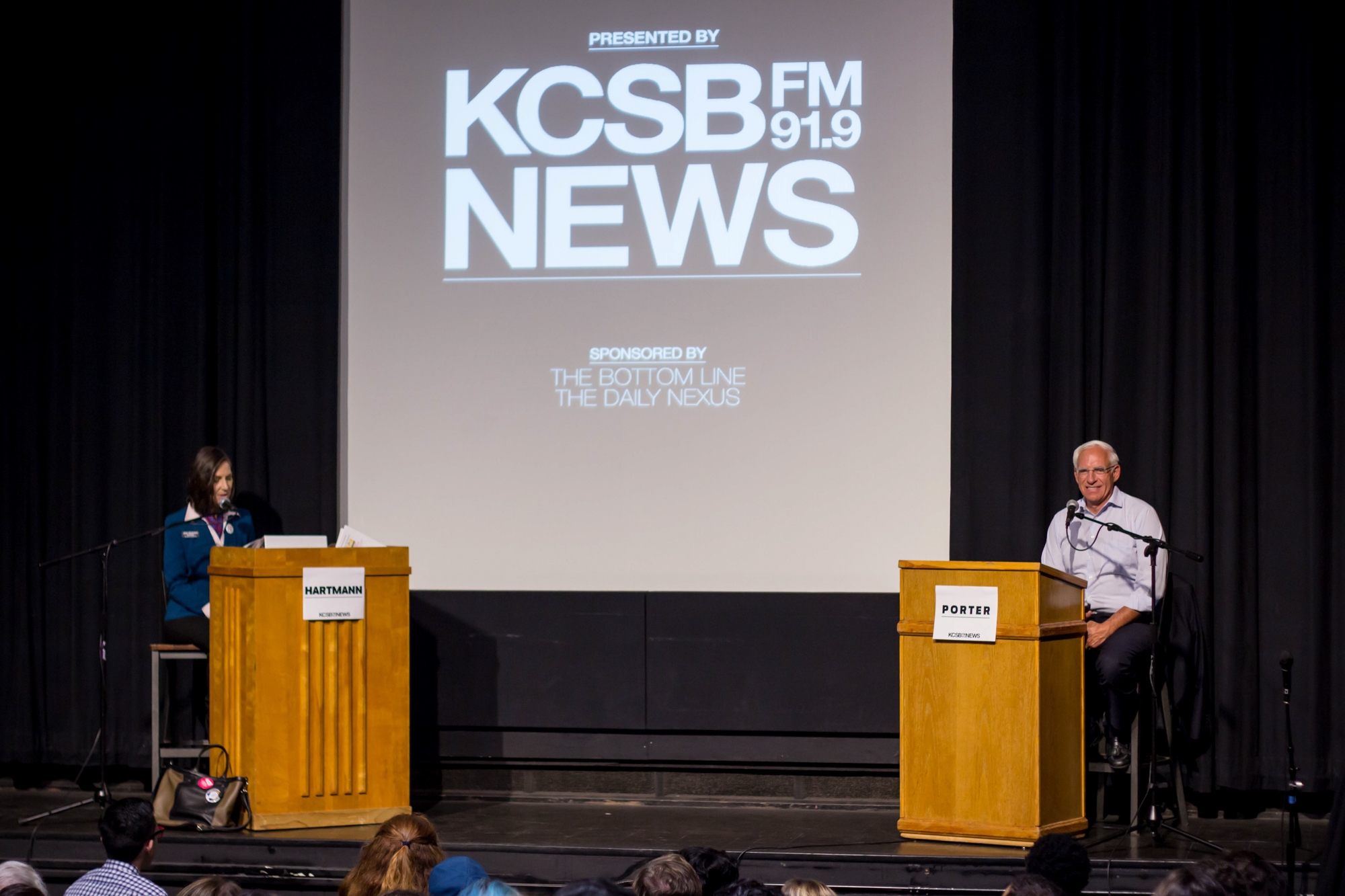 Third District County Supervisor candidates Joan Hartmann and Bruce Porter took the stage in  front of a packed audience in Isla Vista on Thursday, addressing local issues such as self-governance, policing and safety in their first one-on-one debate before the general election.

Hartmann and Porter are vying for a seat on the Santa Barbara County Board of Supervisors to represent its largest district by area. Isla Vistans comprise nearly one-third of its total population, and the unincorporated area will act as a swing vote in deciding Santa Barbara’s representation for the next four years.

In their opening statements, Hartmann said she hopes to continue ongoing work to improve conditions in I.V., and Porter said the county needs to do a better job of listening to I.V.  residents.

Student activists from Fossil Free UCSB, a student group that urges the UC to divest from the fossil fuel industry, protested Porter’s alleged support from “big oil” companies. Prior to the event, the students could be seen picketing outside the theater and taking photos with Hartmann. 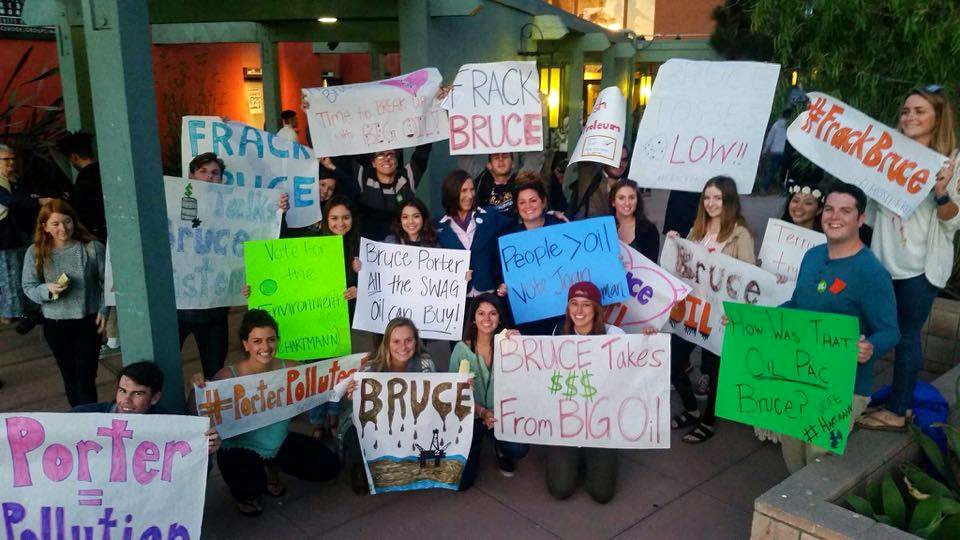 Just before Porter was to begin his closing statement later in the night, the student activists stood up and walked out of the auditorium. Porter waited for them to leave the room before speaking, and one student could be heard yelling, “Later, Bruce,” as they filed out.

Protesters lined up outside the foyer after the event, chanting, “Bruce, Bruce, he’s the man; he’s got oil on his hands,” and, “Porter, Porter, get your oil out of our water.”

Read on for more highlights, listed by topic.

As the first question out of the gate Thursday night, moderators asked the candidates to provide their opinion on the latest efforts toward self-governance in I.V. Hartmann said she supports “local determination” and the goals of Measures E and F. If passed, Measure E will create a Community Services District (CSD) as a form of local government over I.V. Measure F, if passed, will give the proposed CSD the power to levy a utility user tax to partially fund CSD services. According to Hartmann, anybody who supports Measure E without Measure F is “either cynical or naїve.”

Porter said the proposed CSD is “nothing but a reaction to the county failing to do its job to begin with.” He said the powers of the CSD are limited, but the “little gold nugget” of the CSD is its power to form a municipal advisory council. It is for this reason, Porter said, he endorsed Measures E and F from the start, although he claimed Yes on E&F campaign organizers denied his $1,000 donation. “Is this really about Measures E and F, or is this about some political ploy going on?” he asked.

Porter said he disapproved of a noise ordinance that would move quiet hours from midnight to 10 p.m. on Friday and Saturday nights, calling it “ridiculous.” Hartmann said  the noise ordinance proposal came from first-responders who wanted to decrease injuries and fatalities  related to alcohol, but also expressed criticism of the ordinance, calling it a “top-down, about-us-without-us” approach.

When asked about the most effective balance between community policing and county policing, Porter said the decrease in the number of deputies and sheriffs has an adverse effect on unincorporated areas, including I.V.  He also said I.V turns into a “military camp” during Halloween and Deltopia and “it doesn’t need to be that way.” Porter also expressed support for more Community Service Officer activity. Hartmann gave strong support for student-led volunteer programs, like the UC I.V., and said residents could expect to see an increase if Measures E and F are passed. 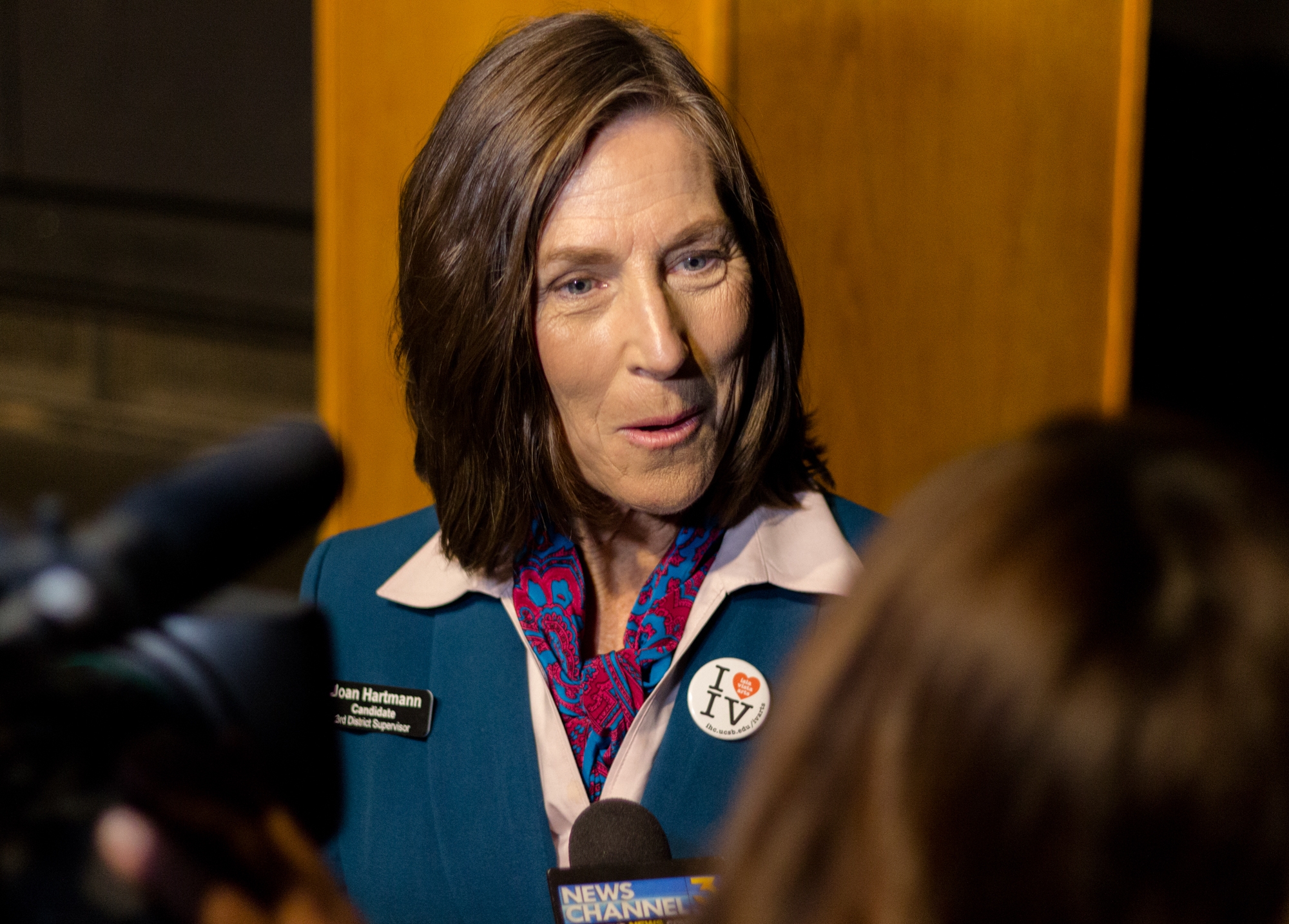 According to Hartmann,  I.V.’s most important issues revolve around safety, community involvement and services for children, families and students. Hartmann said she would support a “safety collaborative” that would involve experts from mental health and rape crisis services, emergency first-responders and UCSB students. In addition to the creation of a safety apparatus, Hartmann also supports the establishment of a local “sobering center” where students can receive treatment for alcohol intoxication without having to travel to Goleta or Santa Barbara for medical treatment.

Porter also asserted that safety is an important priority for I.V. However, he placed strong emphasis on the notion of I.V. self-governance and the quality of I.V.’s infrastructure. Porter again said both the CSD and the municipal advisory council were “fine ideas.” Citing his engineering background, Porter said I.V.’s infrastructure needed to be revitalized and comically referred to skaters who broke limbs resulting from riding over damaged sidewalks and streets.

Moderators asked the candidates to name the successes and failures of Doreen Farr, the outgoing third district county supervisor. Hartmann said Farr was able to build on many of the shortcomings of her predecessor, Brooks Firestone. Porter said Farr failed to truly make a difference in I.V.

Porter and Hartman took similar stances on the need for drug and alcohol abuse treatment centers. Hartmann said the county needs to invest more in community mental health and it needs to create “wraparound” programs that bring services to I.V. residents. Porter proposed the idea that Santa Barbara County should establish a “public, nonprofit consortium,” equipped to assist individuals who are seeking external help for such problems.

Porter said he opposed offshore drilling, saying he had a “great fear” of seeing another incident like the Santa Barbara Oil Spill of 1969, the third largest to have ever occurred in the United States. Porter witnessed oil well fires in Kuwait during his time in the military, and said “nobody has seen anything worse than me when it comes to that, I never want to see that again.” When it comes to the decision between the environment and energy, Porter said, “it’s got to be the environment, period,” but conceded that, for now, onshore drilling was preferable to offshore drilling in the Middle East.

Hartmann spoke about her personal connection to the 1969 Santa Barbara Oil Spill earlier during the debate, and expressed strong disapproval against fracking, a process that injects pressurized water into deep rock sediment to release natural gas. “Global warming is real, dangerous and we need to do something about it, and we need to start here in Santa Barbara County,” she said.

Addressing former allegations that his campaign was “suppressing” I.V. voters, Porter labeled the notion as “ridiculous” and took on a two-part approach to addressing the question. He directed his response toward fourth-year students and informed them that they held the power to vote elsewhere if they left Santa Barbara after graduating while advising freshmen who were registered in their hometowns “to register here.”

Hartmann was questioned about campaign contributions from labor unions ($70,000) and the County Firefighters Government Committee ($30,000) and whether they would influence her nonpartisan position on the board of supervisors. Hartmann said she was proud of her endorsements from these organizations because they are the “people who provide the very services” discussed during the debate, such as foster care and public health services. Furthermore, Hartmann affirmed that she was “honored to have those votes” and she was committed to listening to the needs of these organizations — organizations and services which, she said, ultimately benefit the residents of Isla Vista. 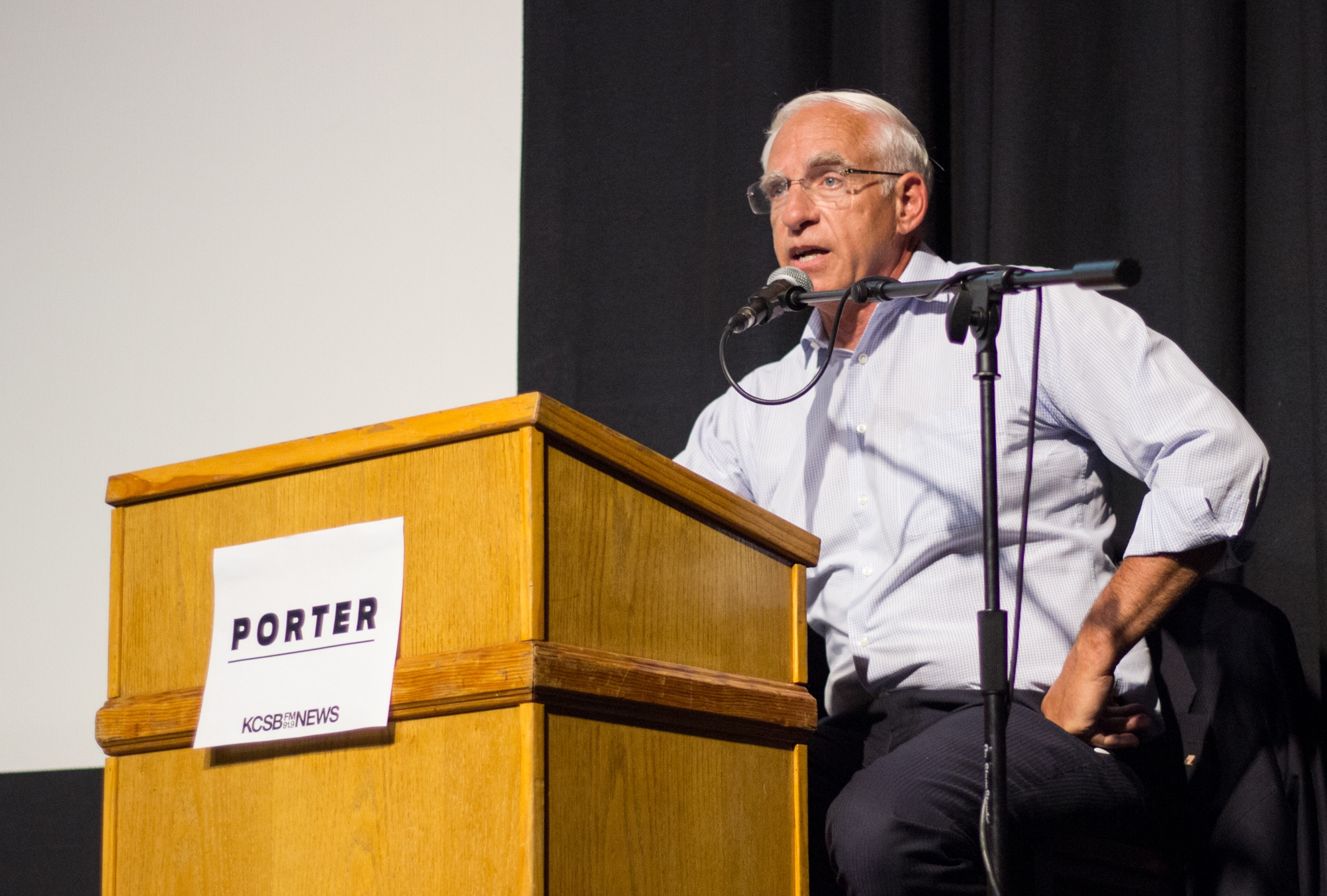 Moderators asked the candidates how they plan to bring water into Santa Barbara in light of the historic drought sweeping California. Porter said the county needs to “bite the bullet and get going.” He advocated preparing for future droughts, recycling and reclaiming water throughout the county and opening desalination plants. Hartmann said the county can capture floodwater and treat wastewater, but it cannot store water in Lake Cachuma. “Underground storage is the way to go,” she said.

Candidates were also asked how they might resolve ongoing land disputes between the county and the Chumash tribe. Hartmann said there might be a way forward with changing leadership at the tribe and at the county board of supervisors. Porter, citing his history of working with the Chumash while with the Santa Ynez Valley Union High School District, said he hopes to establish a “respectful relationship” between the tribe and the county.

Proposition 64 could potentially legalize recreational and medical marijuana in the state of California, but Santa Barbara and several surrounding cities have placed restrictions on the availability of farmland and dispensaries. Porter expressed support for California voters’ decision, but said “the devil is in the details” when it comes to ballot language, adding that he has not yet read the bill.

Hartmann said she “had very mixed feelings” on legalizing marijuana, due to conflicting testimonies between cancer patients who have benefitted from the drug and deep societal problems that stem from drug and alcohol abuse. She added that the NAACP and ACLU have endorsed this proposition because it would curb the large number of minorities who are incarcerated due to drug-related offenses.

Porter is not to be trusted. He has changed his stated position on almost every issue as the campaign has evolved to make it more like what people want to hear than like what he really thinks.

Landlords claim that they will have to raise rents if E & F pass and raise their utility rates a little. But they seem to have lots of money to donate to Porter’s campaign. Porter will eliminate IV’s housing inspection program and IV’s tenant relocation reimbursement programs. Sounds like landlords know a good investment in Porter when they see one.

I was at the debate. This reporting is dishonest. Sad to see that The Daily Nexus has become a stooge for the Porter campaign.

Can you be specific about the problems you see? Thanks.