The Daily Nexus
Water Polo
No. 7 UCSB Opens Conference Against SJSU in First-Ever Night Match at Home
October 14, 2016 at 6:17 pm by Jorge Mercado 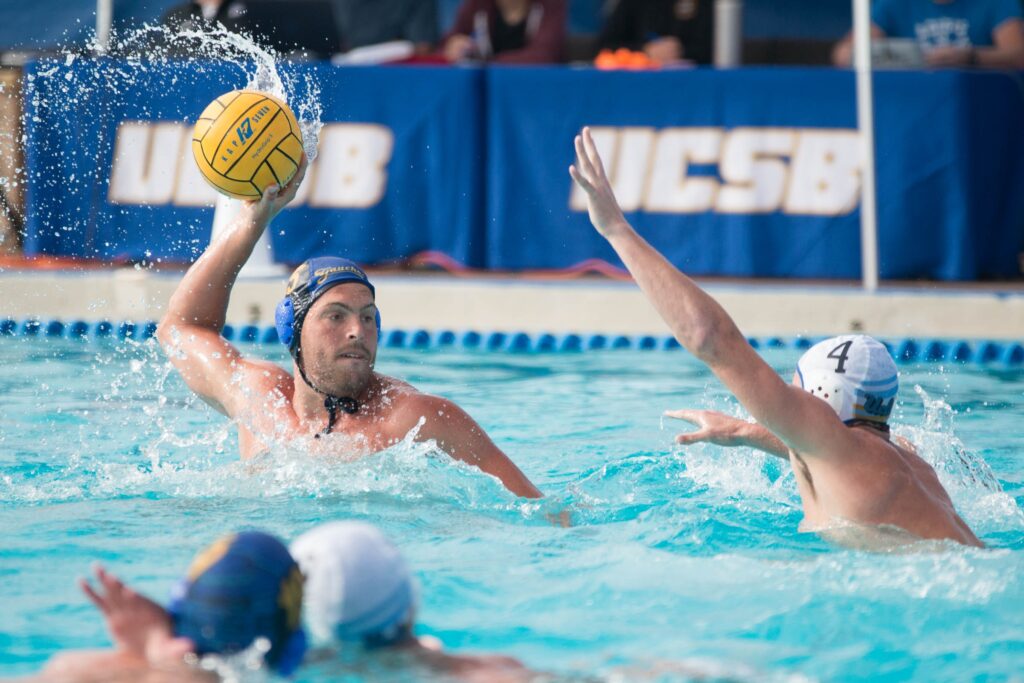 Moving forward from yesterday’s loss to No. 1 UCLA, the No. 7 UCSB men’s water polo team is ready to take on a new challenge: opening conference play in their new Golden Coast Conference against unranked San Jose State tonight.

“It’s our own conference and it’s winnable every year,” Head Coach Wolf Wigo said. “We have got even footing on teams in this conference, so we are excited.”

The Gauchos host their opponents with a solid 8-5 overall record. Four of their five losses are against top-five opponents, and all eight wins have been against the lower-ranked competition. The Spartans head into this match-up with a deflating 2-10 record and are losers of nine straight games with their last two losses being by a combined total of 31-14 against No. 2 Cal and No. 5 Stanford.

It should be noted, since the founding of the MPSF, UCSB’s former conference, the Gauchos never won a single conference title. In fact, only four teams, UCLA, USC, Stanford and UC Berkeley have ever won a conference title, with all four choosing to stay in the MPSF, while six teams, UCSB included, decided to leave.

Tonight is actually a historic night for the Santa Barbara water polo team. Not only are they playing their first-ever conference match in the newly formed GCC, but it will also mark the first time they play a home game at night, as the match is set to start at 7 p.m.

“It’s really exciting,” Wigo said. “We are hoping to get a lot of excitement at the night games, hopefully, a packed crowd, and it’s also our first conference game, so two good things we are really looking forward to.”

With the hype of opening conference play and finally being able to play a night game at home, the Spartans might have picked the wrong day to play the Gauchos.

All that aside, UCSB still has a very dominant team led by two players, in particular, senior attacker Reed Cotterill and junior attacker Shane Hauschild. The two have combined for 43 of the team’s 144 goals scored this season and have made a big impact offensively.

Sophomore driver Boris Jovanovic can also be a big problem at times. Always coming up big in the right moments and in the biggest games, the Serbia native has scored 22 goals this season — second best on the team. Jovanovic was big for the Gauchos’ last night against UCLA, scoring three goals by simply out-muscling his opponents.

On the opposite side of the pool tonight, UCSB will be facing a team that has struggled mightily. Stil, this is the game that could creep up on them if they do not take the Spartans seriously.

In their win over Santa Clara during the first game of the season, freshman driver Ivan Stefanovic came up big by scoring five goals in the match.

For their second win of the season, a 12-10 double overtime victory over Cal Baptist, the Gauchos put in a complete team effort as no player scored more than two goals.

Point being, for San Jose State to pull off the upset, they either need one player to take them all the way entirely or they need a complete offensive effort from every player involved.

It truly is a big night for the Gauchos this evening, as a win would not only start them off the right way in the conference but would also be a big boost to the fans who came for their first-ever night game. Coming off a solid performance in last nights’ match against the nation’s best, one could only hope a letdown doesn’t happen tonight.

UCSB faces off against San Jose State to open conference play at 7:00 p.m. on Friday, Oct. 14 at Campus Pool.