Despite a valiant effort against the No. 1 team in the country, the No. 7 UCSB men’s water polo team came up just short of handing UCLA its first loss in 53 matches falling 10-7 for its first home loss of the season.

“Overall, we played a very strong game,” Head Coach Wolf Wigo said. “We were in it in the fourth quarter, and if we did things a bit different, probably could’ve gotten it into overtime or won but definitely a positive game overall.”

The defeat sets the Gauchos back to 8-5 on the season and 0-0 in the GCC as it is still without a conference match played. The Bruins improve to 20-0 on the campaign, 7-0 on the road while extending their NCAA winning streak record to 53. They have also not begun conference play and stand at 0-0. 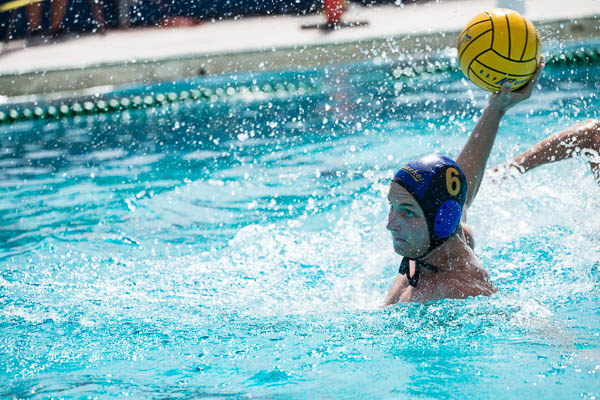 With Campus Pool being a packed house, fans were on their feet most of the game hoping to witness Santa Barbara pull off one of the greatest upsets in recent memory.

Spectators cheered, loud and proud, as the Gauchos continued fighting back into the game.

While UCSB was off to a slow start, it managed to pull out of its rut, thanks to solid performances from two players in particular, and make the game close. However, in the end, the Bruins pulled away and left Santa Barbara with their 20th win of the season.

The scoring began courtesy of UCLA’s junior attacker Max Irving who put one through the back of the net from a long distance thanks to the power play given to his team earlier in the possession. After another Bruin score, sophomore driver Boris Jovanovic responded with a goal of his own, his first of what would be three on the night, to cut the lead to 2-1.

The Bruins took a 3-1 lead into the second quarter but junior attacker Shane Hauschild scored to make the score 3-2. UCLA responded almost immediately as senior attacker Ryder Roberts nailed a shot with the shot clock expiring extending the lead back to two. After trading goals, UCSB’s senior two-meters Samer Alkateb made a shot from close-in off a beautiful pass from Hauschild in the far left to make the score 5-4 heading into the half.

Coming out of the break, the Bruins looked ready to put the home team away, scoring two unanswered shots courtesy of Irving’s second goal and senior defender Chancellor Ramirez’s first to take a commanding 7-4 lead.

The Gauchos finally responded at the 3:15 mark as senior utility Reed Cotterill continued his great season and kept the Gauchos in the game with a beautiful slap shot off a high pass from junior attacker Josh Jordan. UCLA scored again, but Jovanovic capped off his hat trick with a goal from the corner with five seconds left in the quarter to make the score 8-6 heading to the fourth.

In the final frame, UCSB tried its hardest to cut the lead even further, but UCLA was too physical and continued pushing back. After trading goals, junior utility Alex Roelse made his third goal of the match as well and put the Gauchos away for good making the final score 10-7.

“We definitely made some mistakes,” Wigo said, “but you’re always going to make mistakes in most games. We always want to put ourselves in good position against the top teams in the country late in the game, and we did that today.”

Despite the loss, Santa Barbara — players and coaches alike — seemed confident with the direction the team is headed and the effort put forth in the match against No. 1 UCLA. With conference play opening tomorrow, a big storyline headed into the match will be how UCSB responds after this solid performance, albeit in a losing effort.

“This is great; this team beat UC Irvine 11-0, and they have blown out other teams.” Wigo said. “Even though we lost, we played well. We had to play great [to win]; we didn’t, but we did play very well, and I think we have a lot of confidence heading into tomorrow’s match.”

The Gauchos begin conference play at 7:00 p.m. on Friday, Oct. 14, against the Spartans at Campus Pool. The match will be the first-ever night game played at Campus Pool.