The Daily Nexus
Volleyball
Gauchos Hope To Take Advantage of Faltering Competition
October 13, 2016 at 5:00 am by Liam Bailey

The UCSB women’s volleyball team will face off against the bottom two teams in the Big West in UC Riverside and Cal State Fullerton this weekend. Sitting in fourth place in the conference standings, the Gauchos hope to take advantage of playing below .500 opponents in order to avoid splitting their matches for the second straight weekend. 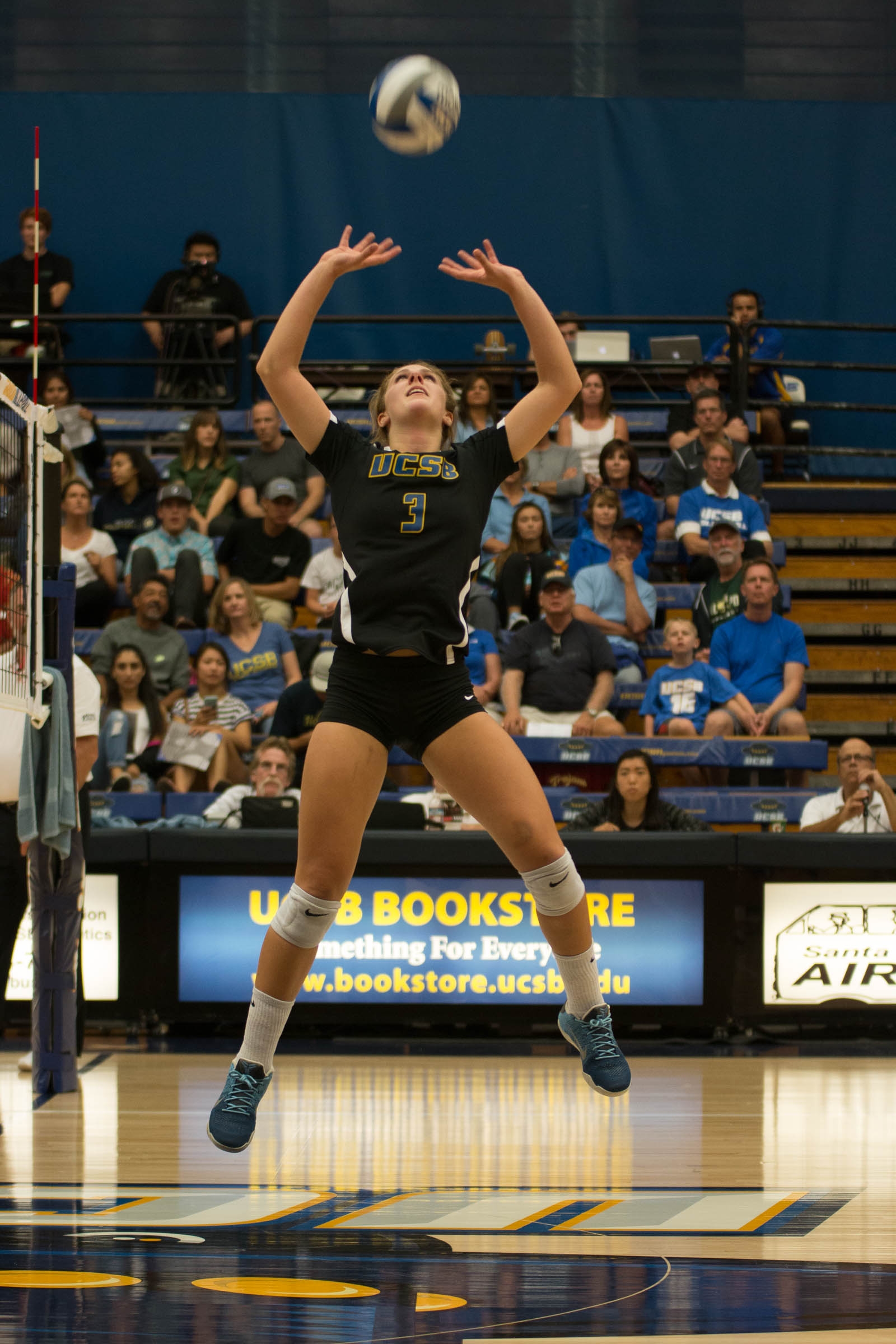 Friday’s match in Riverside will pit the Gauchos, 11-7 overall, 2-3 in conference play, against a 5-11, 0-4 Highlanders squad looking for their first conference win.

Riverside’s offense is led by freshman outside hitter Mickayla Sherman, who averages 2.88 kills per set, and junior middle blocker Meg Graham following behind her with 2.00 kills per set. The duo has racked up 293 kills so far this season. Graham holds a hitting percentage of .268, the highest on her team, and has committed only 39 errors on the season.

Helping set up the pair of outside hitters with scoring opportunities is sophomore setter Chelsea Doyle as she has racked up 8.72 assists per set and will enter Friday with 1,277 assists on the season. Most notably, she has 22 service aces, a mark that ranks fifth in the Big West.

After a 5-7 finish in their non-conference schedule, the Highlanders have lost each of their Big West matches. They were swept in dominant fashion by Hawaii and came up short against Cal State Fullerton, Long Beach State and UC Irvine despite taking each to four sets.

UCR will face Cal Poly on Saturday, and —with that being the first of two opportunities to reverse the disappointing start to its conference schedule — it is plausible that the Highlanders will be prepared and determined to earn victories as the underdogs.

UCSB’s Saturday opponent, Cal State Fullerton, is coming off a loss to UC Davis that dropped the Titans’ record to 1-3 in conference play.

The Titans boast a strong line of outside hitters, with five averaging more than a kill per set. Sophomores Shimen Fayad and Madeline Schneider lead the group with 3.42 and 3.17 kills per set respectively, forming a duo that the Gauchos will have to watch out for all Saturday evening.

Fayad also cleans things up on defense for the Titans, as her team-high 197 digs leads both of the teams’ defensive specialists, though freshman libero Madisen Babich leads the team in digs per set with an average of 3.25 to Fayad’s 3.08.

Freshman setter Rachel Hall leads the Titans with 500 assists on the season, averaging nearly eight per set at 7.94, followed by senior libero Precious Manu, who has registered a total of 166 assists and 5.72 per set.

The Gauchos will attempt to build off their mixed weekend after again displaying flashes of the full potential that was expected to occur all year.

After redshirt freshman outside hitter Lindsey Ruddins played in all three sets against Cal Poly, the team is hopeful she’ll be able to sustain her average of 4.12 kills per set — which ranks second in the conference — through the weekend.

Junior outside hitter Chanel Hoffman is not far behind her with 3.41 kills per set. Her performance thus far has been a steadying force for a team that has fluctuated between highs and lows this season.

Moreover, redshirt freshman Hannah Juley has been one of the most productive setters in the league. She’ll look to improve her already stellar average of 9.84 assists per set closer to the double digits this weekend.

UCSB’s libero, sophomore Emilia Petrachi, continues to reign supreme in the conference with 4.54 digs per set and ranks third in total digs at 277.

The Gauchos have the pieces, the coaching and the attitude to still make some serious noise this weekend as they have consistently stuck with teams even in their losses.

With two wavering opponents, UCSB will look to build some momentum in hopes of improving their record to above the .500 mark.

The Gauchos will travel to Riverside this Friday, Oct. 14 to play the Highlanders at 7 p.m. at the SRC Arena. Their road trip will continue at Fullerton on Saturday, Oct. 15 to take on the Titans at 7 p.m. at Titan Gym.