The Daily Nexus
Film & TV
Director of Sundance Fave Chats with Magic Lantern
October 13, 2016 at 10:28 am by Tamara Luechinger and Alex Wehrung 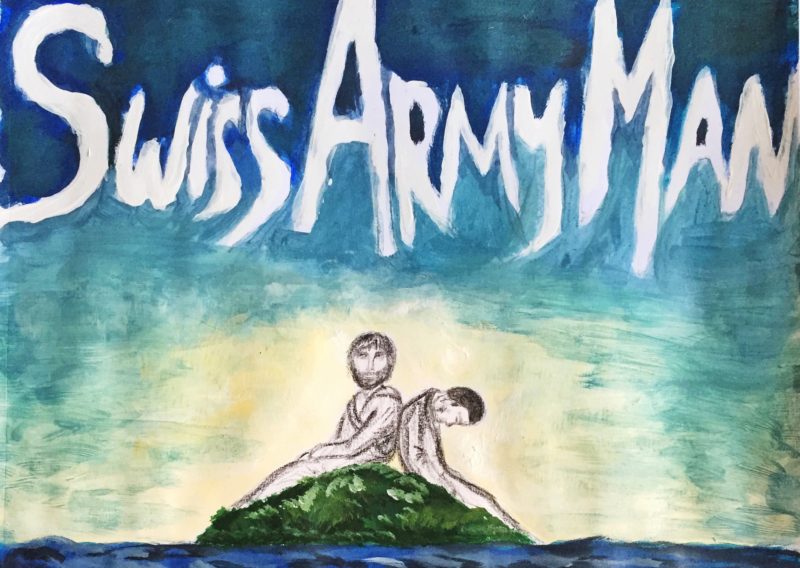 UCSB’s local Isla Vista Theater was bustling with film students and other movie goers on Friday evening as they eagerly awaited the commencement of the screening of “Swiss Army Man.” For only $4, the event, hosted by UCSB’s Magic Lantern Films, boasted a night of tasty snacks, interesting trivia, themed prizes and, most importantly, an appearance by Daniel Scheinert, one of the directors of the film. The event delivered, with an arsenal of buttery complimentary popcorn at the entrance, a plethora of film posters and a swiss army knife, ready to be given away to lucky prize winners. Upon stepping into the screening area, the first sight was that of the night’s special guest, who looked nearly indistinguishable from the college students who surrounded him, chatting to a large group of curious and attentive viewers.

“Swiss Army Man,” which premiered at Sundance Film Festival in January, follows the story of Hank, played by Paul Dano (“Little Miss Sunshine” and “Love and Mercy”), who is stranded on a desert island. He discovers a corpse named Manny, played by Daniel Radcliffe (of Harry Potter fame), whose body has special powers. Hank manipulates Manny’s powers, which consist of a number of odd bodily functions, to navigate their way back home. Throughout their hilarious and heartfelt journey, Hank teaches Manny what it is like to be alive and Manny reminds Hank of what it is like to not be alone.

The movie thrived off of its disarming and offbeat humor, in a series of uncomfortably funny moments in which Manny attempts to understand and adapt to the conventions of the world. Yet, it displays a vulnerable, raw human connection between Dano’s lonely and undeniably relatable Hank and Radcliffe’s compassionate corpse.

The film was written and directed by Scheinert and his creative partner Daniel Kwan, who, together, call themselves The Daniels. This is Scheinert and Kwan’s first feature film. However, the two previously garnered internet fame through their innovative music videos for artists such as Foster The People and The Shins. One of their more terrifically absurd videos, created for Lil Jon’s song “Turn Down for What,” was even played before the screening of the film. Second-year Erin Sim remarked, “It was so interesting to see how their style translated from the music videos to the big screen. It was obvious some of their previous work influenced the movie, especially in terms of the special effects.”

Following the screening, Scheinert climbed onstage as T. Rex’s “I Love to Boogie” blasted through the speakers of the auditorium. He explained that he “drove down from L.A. with a bunch of [his] friends with that song on repeat throughout the whole trip,” and expressed his newfound distaste for it. During a Q&A session, he mentioned that the film contained many musical inside jokes much like that one, including a ballad rendition of “Cotton Eye Joe” performed by the directors’ friends, Manchester Orchestra, and the frequently hummed tune of Jurassic Park. “I always hum that or ‘Kiss from a Rose,’ by Seal, [while working with Kwan],” Scheinert joked.

The audience was graced with tidbits of trivia, including how the appearance of a fictional creature in the film came to be. “Daniel Radcliffe’s bodyguard dressed up as Bigfoot one day and just ran in the back of shots,” Scheinert revealed. And when asked where the multitude of fart sounds littered throughout the movie were obtained, he chuckled, replying, “I guess it’s kind of illegal, but we actually took tracks from this video online called ‘101 Real Farts’ … We wanted the farts to be unique, because every one was supposed to be a character development moment.” As the audience roared with laughter, he expressed his hopes that “someone will recognize their own fart in [the] movie.”

One audience member commended Scheinert on the impact of the film, explaining that they had gotten up to go to the bathroom during the middle of the movie, but upon seeing “everyone in pure awe, laughing and smiling” they rethought their decision. Scheinert alluded that the film’s creation process was similar: hard to abandon. He advised aspiring filmmakers to “make sure your movie is fun to make,” and to treat it like “a therapy project.”

“This was one of the best audiences I think we’ve seen,” said Stephanie Lynch, Scheinert’s girlfriend. “It was a really great group of people. Everyone was so into it; it was really cute.”

The turnout seemed to impress a fair few people. “This was one of the best [screening experiences] we’ve ever had,” said Magic Lantern producer DJ Palladino. “There were these guys from Ventura who made [‘Bellflower’], which The New Yorker called ‘the future of cinema’ and these guys came and they were amazing, and there were only twenty-five people in the audience. ”

The evening ended in a way left up to individual interpretation, much like the film did, when Scheinert was asked what the point of “Swiss Army Man” was. Implying it was a reflection of his and Kwan’s journey as filmmakers, he added, “It’s sort of about how we all make up movies in our head.